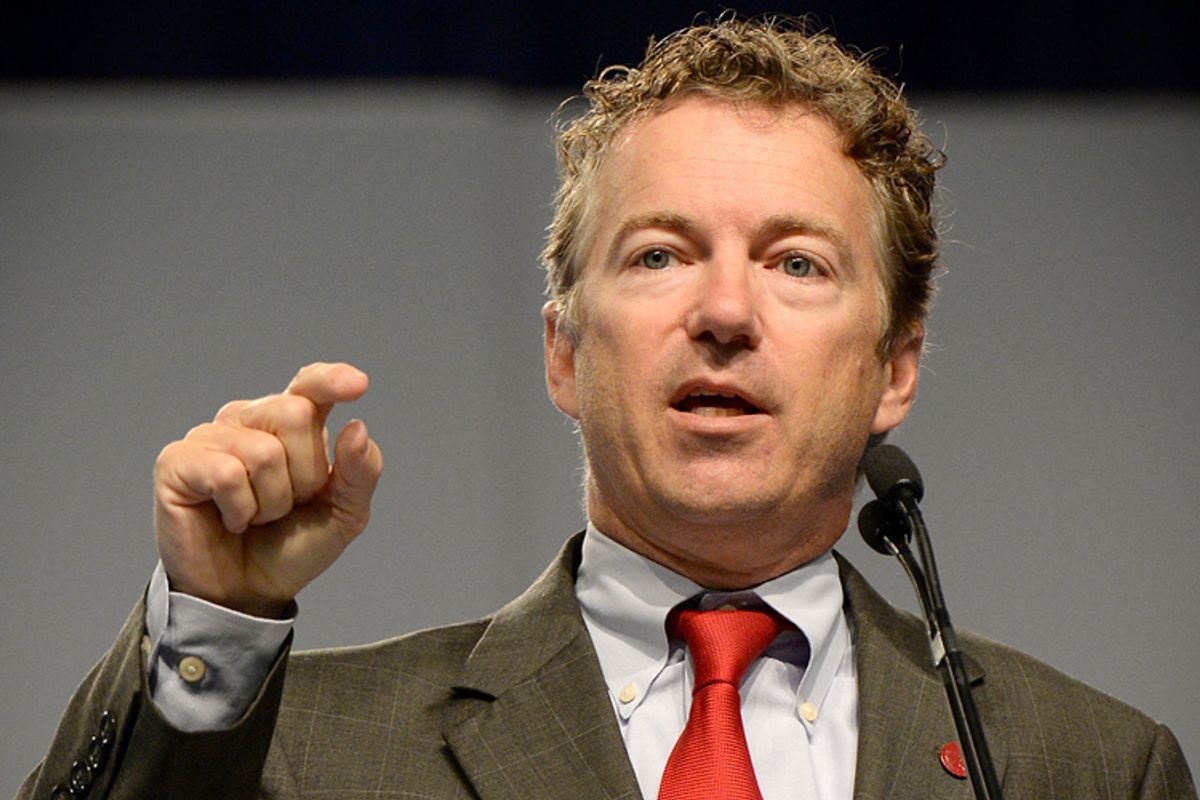 Drawing the largest crowd, the biggest cheers, and the longest standing ovation of the convention thus far, Kentucky Sen. Rand Paul thrilled CPAC on Friday afternoon with a speech that felt at times like a libertarian version of the romantic, sweeping and idealistic remarks that turned Barack Obama from a state senator to a two-term president in little more than 8 years.

The comparisons between the two men end there, however, as Paul spent just as much of his time at the podium bashing Obama as celebrating liberty. This is CPAC, after all.

“How will history remember Barack Obama?” Paul asked. As a great president, a defender of liberty, a noble American in the vein of William Lloyd Garrison, the 19th century abolitionist whom Paul cited as an exemplar of principle and fortitude in the name of freedom?

Not so much. To describe the 44th president, Paul fast-forwarded about 100 years from Garrison's time, to an era when the words "Pink Floyd" meant a whole lot more to most people than did "Pinkerton."

Quoting from the seminal prog-rock band's hit song "Wish You Were Here," Paul described the sacrifice of liberty in the name of security as being like exchanging "a walk-on part in the war for a lead role in a cage."

Paul was especially unhappy with Obama's decision not to veto 2011's National Defense Authorization Act despite threatening to previously and making clear when he signed it into law that he did so "with reservations" because of provisions that allow the military to detain U.S. citizens without charges if they're suspected of terrorism — even if they were arrested in the United States.

"Instead of merely suggesting that he wouldn’t use this dreaded power," Paul declared, "a great president would have taken pen in hand and vetoed this abomination.” This line, along with Paul's statement that "what you do on your cell phone is none of [the National Security Administration's] damn business" drew a huge applause from the CPAC crowd.

Paul's voice was hoarse and his delivery was crisp. His ending was somewhat rushed and anticlimactic, too. But if you're the betting sort, know this much: Judging by the vibe in the room before, during and after his remarks, the chances of the Kentucky senator winning CPAC's presidential straw poll for the second year in a row look very, very good.