Republicans have a secret Obamacare strategy -- and it's based on deception

The ploy: Expecting to win Senate seats, they'll play up Obamacare now -- to falsely claim it was reason they won 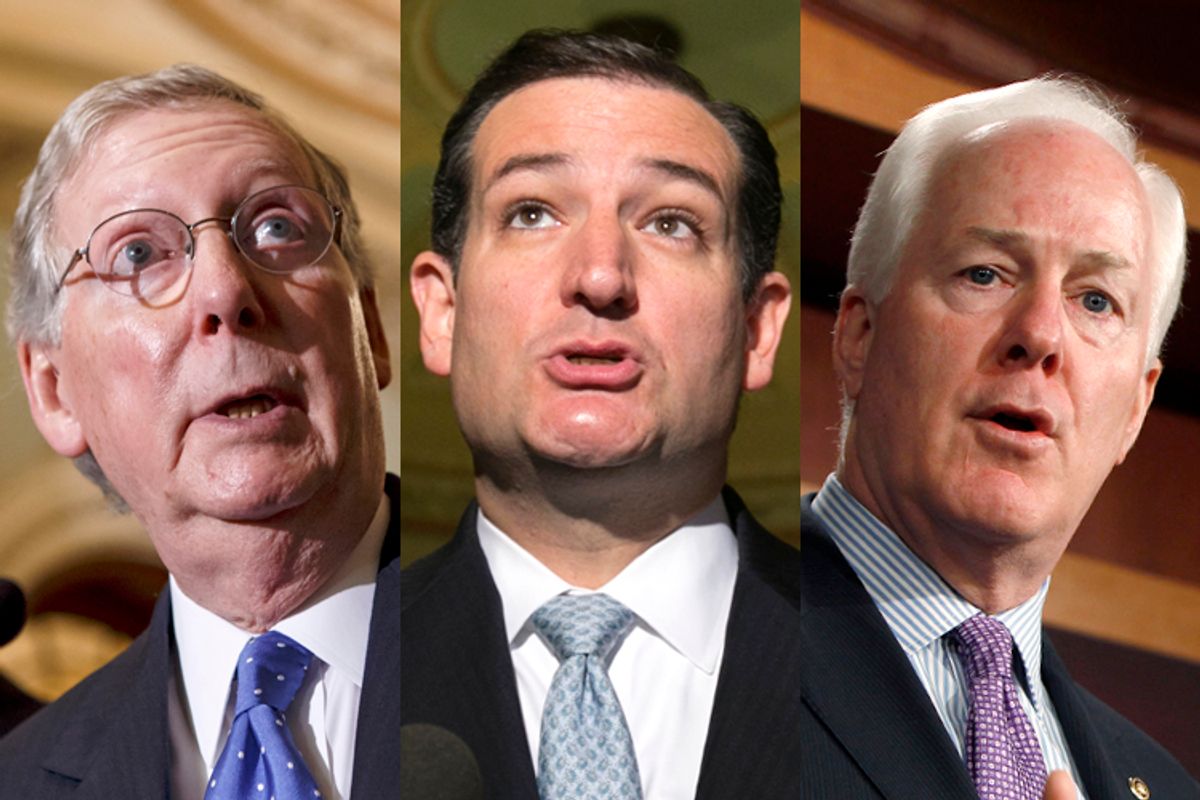 Imagine you're running a campaign and you know to a near certainty that you're going to win. Not that the election is rigged or anything. But you're clairvoyant, and you've divined that you basically can't lose, no matter what your message is or how well you deliver it.

What do you do?

If you said, "take an eight-month vacation," then I like how your mind works, but you're lazy and should never work in politics.

On the other hand, if you said "campaign relentlessly on whatever issue you hope to advance after the election," you win 10 shares of Salon dot com stock and are already well on your way to understanding the 2014 midterms.

I bring this up in light of a new Washington Post/ABC News poll, which finds that in spite of the GOP's abiding unyielding infatuation with Obamacare, the law is actually a political wash, at least to first approximation.

Here's Greg Sargent on the numbers: "barely more than a third (36 percent) say support for Obamacare would make it less likely they vote for a candidate, versus 34 percent who say 'more likely.' This is overwhelmingly driven by Republicans: 70 percent of them say 'less likely,' while only 35 percent of independents say the same, and moderates say they’d be marginally more likely by 35-31."

So here we are, eight months out from the midterms, with control of the Senate on the line, and the GOP is orienting its entire campaign around an issue that -- again, to first approximation -- confers them no net benefit. Why the hell would they do that?

A few reasons. One obvious reason is that they've worked their voters into such a lather over Obamacare that they can't just quietly sideline it, particularly now that it's actually being implemented. Then there are related, second-order effects. If Obama creates an intensity gap between Democrats and Republicans, then the issue obviously advantages the latter. Having worked their voters into said lather, Obamacare is precisely the kind of issue that will drive them to the polls in November -- especially if they've been deceived into thinking that Obamacare can be repealed.

Another reason is, well, what the hell else are they going to talk about? They could talk about their top tax writer's new tax reform bill.

OK, so not tax reform. What about immigration reform?

Their own healthcare plan? Yeah …

You see the problem. There's not much of an agenda to speak of beyond hating Obamacare.

But I think there's more to the Republicans' strategy than being hemmed in by their own past decisions. Here I quote me.

The electoral map is also probably creating inertia by making the GOP’s strategy unfalsifiable. This year, Senate Democrats are defending the seats they won in 2008, when Barack Obama won the presidency in a landslide amid the massive economic crisis that capped off George W. Bush’s horrendously unpopular presidency. They’re also defending the House in a midterm three years after they gerrymandered themselves a durable majority. Under the circumstances, even a bad GOP strategy will probably yield significant gains in the Senate and retention of the House. If Republicans manage to flip the Senate it won’t really matter whether it was a consequence of boring fundamentals rather than a wise political strategy. They’ll treat it as a vindication of anti-ACA absolutism anyhow. And so it’s hard to escape the suspicion that the GOP’s advantages this cycle explain its midterm strategy rather than the other way around.

That same Washington Post/ABC News poll supports this theory. Sargent again: "The poll finds: 'In the 34 states with Senate races, 50 percent of voters say they favor Republicans and 42 percent favor Democrats.' That’s a real problem for Dems, but it’s mostly a structural one. Given that the two parties are tied in the generic ballot, that Senate advantage reflects the fact that Dems are on defense in more races. As Alan Abramowitz has explained, thanks to Dem successes in the 2008 landslide, Dems are now defending Senate seats in seven states carried by Mitt Romney in 2012."

The Republicans are going to make gains in the Senate this cycle almost no matter what. If you're a Republican and you know that in advance, the smart thing to do is treat a single issue as if it's the decisive one of the campaign, everywhere, in every race. That way when it's over you can argue that the voters vindicated your position, even if they didn't. You can claim a mandate, even if one doesn't exist. And you can safely bet that the political media will swallow it whole.