Sorry, libertarians: Your dream of a Bitcoin paradise is officially dead and gone 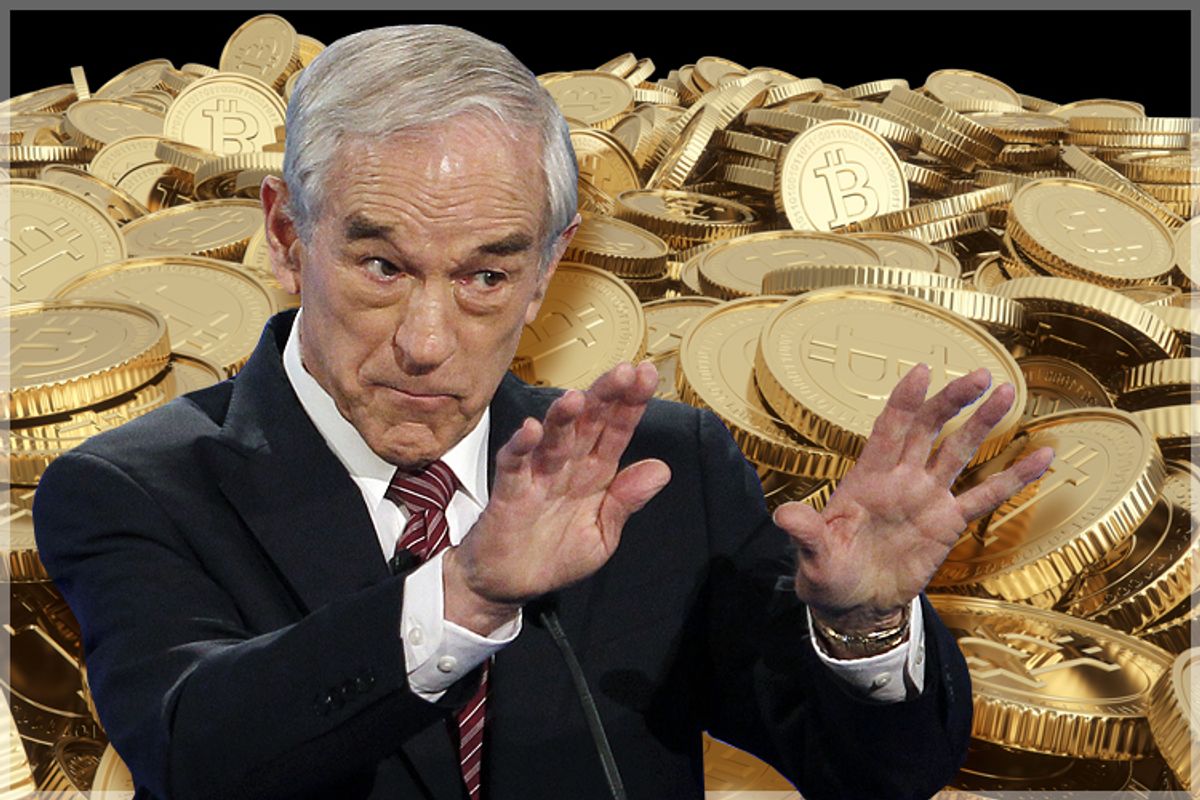 So much rage. So much anger. So much disappointment. Newsweek's Leah McGrath Goodman stunned the Internet on Thursday with a report that, for the first time, identified the man who created Bitcoin, the world's most successful, and infamous, crypto-currency. In a twist worthy of Thomas Pynchon, the pseudonymous mastermind "Satoshi Nakamoto" turned out to be a 64-year-old Japanese American named — incredibly — Satoshi Nakamoto.

This bombshell caused enthusiasts to explode in fury.

Goodman was attacked as a bad journalist: All her evidence -- declared scores of angry tweets and posts on Reddit -- was circumstantial. (And it is true, Goodman's case, while persuasive and fascinating, is not definitive. After the Newsweek story, in which he seemed to tacitly acknowledge involvement with Bitcoin, Nakamoto would go on to deny to an AP reporter that he was actually its creator.) Goodman was also flagellated for invading Nakamoto's privacy, for "doxxing" him by publishing photos of his house and license plate that betrayed his anonymity. She was put on notice that she would be responsible if anything untoward happened to Nakamoto, who is believed to own a fortune in Bitcoin, and could now be the target of violent thieves.

To people who live in the real world, the sound and fury seems mostly absurd (although the horde of  media chasing Nakamoto through L.A. on Thursday afternoon definitely wasn't journalism's finest hour).  If you invent a multibillion-dollar digital currency explicitly designed to remake the global financial system that gains serious traction, people will want to know who you are. If you mastermind an anarcho-libertarian project to break the hold of governments over money, history will demand answers -- and good reporters will find them. Exposing Nakamoto's identity is the very definition of "news." If Goodman hadn't figured it out, someone else would have, but credit goes to the reporter who nails the scoop.

So why all the rage? Could it be because Newsweek managed to stir up something much deeper than just the ethics of "doxxing"?

To understand what's fueling this storm of vituperation, we need to journey all the way back to last week, when the all-consuming Bitcoin drama was focused on the collapse of Mt. Gox, the onetime preeminent Bitcoin exchange that somehow managed to lose around half a billion dollars worth of the currency -- whether to thieves or incompetence, no one seems sure.

As journalists and pundits raced each other to seize upon Mt. Gox as evidence of Bitcoin's inevitable doom, the Wall Street Journal published a story that, among other things, quoted one Bitcoin investor bemoaning his losses. However, the investor felt his story had been misrepresented, and published an open letter to the Journal reporter on Reddit's Bitcoin forum, where he is a regular contributor. One paragraph stands out:

I have dedicated my life to building and supporting the Bitcoin project. I don't give a damn about the money I lost at Gox. That's not important. What is important is that Bitcoin is resilient and enduring, and will continue to grow and change the world for the better. It is a story of human progress through technology. It is a story of the good seeping into the cracks of a corrupted financial system. It is a story of passionate people struggling against all odds to remedy the calamities brought down upon society from the most potently misguided people and institutions on Earth.

You will not easily find a more eloquent description of the utopian dreams that so many Bitcoin enthusiasts have invested in Satoshi Nakamoto's supposed invention. Bitcoin has always been viewed as a "currency of resistance" -- a way to wrest control over the essence of money away from governments, central bankers and Wall Street. Bitcoin has been seen, from the beginning, as one of the most potent weapons in the techno-libertarian arsenal.

There is a great geeky romance to this dream, this fantasy that a bunch of programmers tinkering with code could remake the fundamental infrastructure of the global economy. It was a romance made all the more mysterious and entrancing by the creation myth of the currency. No one knew who Satoshi Nakamoto really was! Bitcoin was the very model of a true conspiracy theory. The whole improbable narrative felt like it was ripped from the pages of a classic cyberpunk science fiction novel. But it was real.

So just imagine the psychological ups and downs of the past two weeks for the most fervent members of the Bitcoin community. First, the Bitcoinistas were forced to suffer the derision of disaster rubberneckers pointing at the Mt. Gox debacle and using it to mock the entire project. Then they learned that the great mastermind who dreamed up this transformative vision is a cranky model train enthusiast who doesn't get along with his family and created Bitcoin because he resented the high fees he had to pay on international wire transfers to buy train parts from overseas.

It all seems a little less romantic, doesn't it? As Forbes reporter Andy Greenberg, who has long been one of the best journalists covering Bitcoin, lamented in a tweet, the denouement delivered a "crushing sense of anticlimax."

If the last two weeks have taught us anything, it's that there is nothing magically transformative at all about Bitcoin. Mt. Gox's woes impelled Japan's financial authorities to announce that they will now start regulating Bitcoin. The founder of the online drug emporium Silk Road, once cited as proof that Bitcoin enabled resistance to the powers that be, is now in jail. The geeks and dreamers who founded the first Bitcoin institutions are being replaced by Silicon Valley start-ups. There is no room for libertarian utopia in this scenario.

The irony here, though, is that a good argument can be made that doomsayers are overstepping when they write Bitcoin off as a complete failure. Good programmers and successful start-ups learn from their mistakes -- they iterate, to borrow a popular piece of Silicon Valley jargon. Serious investment is now at play in the Bitcoin world, and there is every reason to believe that the institutions that store and transfer and exchange Bitcoin will become more secure. Bitcoin's true value may turn out not to rest in its potential to liberate mankind from central bankers and government autocrats, but in its ability to achieve the much more prosaic task of moving money around the world more cheaply than it is currently practical to do so. Think of Bitcoin as the 21st century version of a Western Union money order and you might not be far off. The model train importers of the future may end up revering Satoshi Nakamoto as their savior. No more big fees for international transfers.

But governments and bankers and Wall Street money men will still be around. Neither Satoshi Nakamoto nor Bitcoin ever stood any chance of operating outside the bounds of conventional society. There will be regulation, there will be consumer protection, there will be rules and taxes, and criminal prosecutions for those who break the law. Bitcoin isn't cyberpunk fantasy and it isn't a Thomas Pynchon novel. It's dull. The thrill is gone. And that's why people are so mad.