Republican governors are supporting a plan for "discount" $10,000 degrees. Here's why it's dumber than it sounds 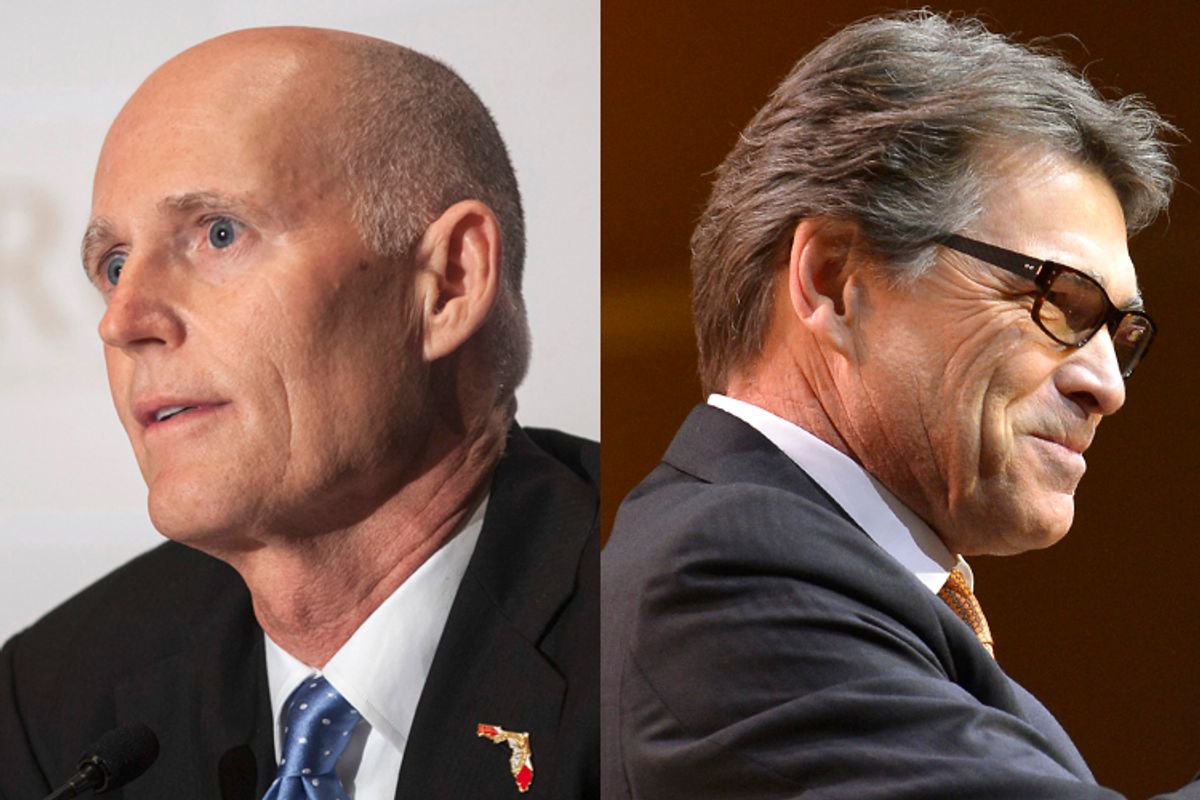 Search any news website's archives and you'll find dozens of articles about how post-secondary education in the United States is broken. There's too much debt to be had from attaining a degree, and too little benefit. Conventional wisdom is right; college is a poor decision.

While pundits, parents and pupils can all see something is wrong with the system, nobody can agree on a solution. Of the many that have been proposed, the $10,000 degree has gained the most traction. Republican Govs. Rick Perry of Texas and Rick Scott of Florida threw their support behind the idea, and discount degrees started showing up at small-time state colleges, perhaps preluding their presence in larger universities.

Though there are disagreements about how the $10,000 degree should actually be implemented, the basic tenets of it are as follows: Strip-mine “the college experience” of its useful parts — courses that increase employability, internships, etc. — and present them to potential students customers for the low price of $10,000. This would, in theory, greatly reduce student debt while arming graduates with the tools they need to gain employment outside of retail or the food service industry.

This solution has its merits but is fundamentally misguided. Trimming post-secondary education of its ample love handles (bloated bureaucracy and administrator salaries, expensive on-campus perks, etc.) is a welcome development. But the other aspects of the plan are inelegant. The $10,000 degree is a scalpel when the system needs a sledgehammer.

First, not all colleges offering $10,000 degrees offer them in each major. One such college in South Florida refused to offer a $10,000 degree in nursing, its most popular (and most expensive) program. Another Florida state school only offered a cheap degree in one major: information management. If $10,000 degrees are to be the panacea their proponents wish them to be, more majors have to be offered -- not that more degree-holders being vomited out into the job market would necessarily help matters (we'll get to that in a minute).

There are still more issues. Florida is one of the chief testing grounds for the $10,000 degree. If bargain-bin degrees sweep the nation and are anything like those in Florida, expect them to not protect kids attending college straight out of high school from debt. According to the National Journal, those who seek the $10,000 degree skew “toward working adults seeking a credential that will lead to a promotion or new career.” Furthermore, schools offering $10,000 degrees “can't offer programs that directly compete with those at nearby universities.” Wide-eyed high school graduates will pursue a $40,000 creative writing degree over a $10,000 degree in accounting because they're too young and idealistic to know any better. Until every degree costs $10,000, it's not a viable fix. Kids will still plunge themselves into debt for their dreams because they feel an expensive degree might be the only way to see those dreams realized.

Then there's the problem of creating what the professoriat called “Walmarts of higher education —convenient, cheap, and second-rate.” The biggest concern is universities metamorphosing into the academic equivalents of McDonald's franchises. Sure, they've served billions of hamburgers but quantity comes at the cost of quality.

The professoriat is right for the wrong reasons. $10,000 degrees are bad not because they diminish education's value — it doesn't have any — they're bad because they further diminish a degree's already questionable value. The trite saying about how a college degree is the new high school diploma is true, but you don't have to go into debt to the tune of nearly $30,000 for a high school diploma. Decreasing the price would help solve the debt issue, but it would make the already ubiquitous pieces of paper even more common. This would have disastrous effects on college graduates.

The Bureau of Labor Statistics estimated that only 27 percent of jobs in the United States required a degree, while a survey by the U.S. Census Bureau showed that 47 percent of workers have an associate's degree or higher. The Bureau of Labor Statistics predicts the numbers will only get grimmer. By 2022, they expect the majority of fields with abundant employment opportunities to not require post-secondary education. In less bureaucratic terms: In the future, most of the fields with lots of job growth won't require a degree.

$10,000 degrees will make degrees cheaper to acquire and therefore more appealing. But there are already too many degree-holders; recent college graduates already have the worst job prospects in two decades. Adding more degrees to the job market will make the problem worse. What will overworked H.R. departments do when faced with enormous numbers of degree holders? They can't use a bachelor's degree as an easy filtering mechanism because everyone will have a bachelor's degree. The hiring process will have to become even more stringent. Graduates will have to seek other qualifications to stand out in the deluge of generic, Times New Roman-clad résumés boasting $10,000 degrees. Perhaps graduate school will be the answer? Or maybe seeking a second cheap degree to get an edge on the competition is a better option? Both options include more debt. In the long run, widespread $10,000 degrees will create more hoops for graduates and job seekers to jump through, not fewer.

So then how can we fix post-secondary education if making it cheaper and gutting the coursework isn't the answer?

Contrary to popular belief, massive open online courses are not a viable option. Programs like Coursera, Udacity and edX are all academic red herrings.

One solution is for students to take a gap year. The mind can discover many things when it's unencumbered by a syllabus and free from academic bondage, crowded lecture halls and overworked, desperate adjunct professors. Students should avoid college for a year immediately after high school, or take a year off from college between the first and last two years of study. This a growing trend that noted college commentator and author Joseph O'Shea claims has numerous benefits on students, chief among them being quickening their development as people and expanding their worldview. From a more practical standpoint, gap years often influence students into changing their majors. Most students would benefit from a gap year, seeing as nearly 30 percent of graduates wished they had chosen a different major. Perhaps a gap year could've put them on the right path. Gap years will not solve college's problems outright, but they'll help steer students into fields they belong in — be they inside or outside of academia. This alone can help mitigate the symptoms of post-secondary education's ills, however. More gap years means fewer “bad” majors and fewer people going to college just because that's what society expects of young people, which means less debt.

Another idea is the creation of a government-sponsored Thiel Fellowship, though for far less money and covering a wider range of subjects. For those not in the know, a Thiel Fellowship is essentially a $100,000 grant created by famed entrepreneur Peter Thiel. It's intended for students under the age of 20. They're given this money to drop out of school and pursue goals independent of universities (typically in the fields of scientific research or technology). If the government is willing to subsidize degrees of questionable value in the form of student loans, why not give out government-sponsored fellowships to support other endeavors that can't possibly be less profitable than studying philosophy for four years?

The last and least likely to happen solution: Prohibit employers from requiring degrees for certain jobs, whether through legislation or other means. A degree meant something 40 years ago. Today a degree means you can get a job answering phones — and that's if you're lucky. Menial jobs should not require degrees, not even ones that only cost $10,000. So many positions requiring degrees forces students to attend college, which forces them to go into debt. Sadly, most graduates don't even get a decent job for all their time and money spent. If only certain roles required degrees (think doctor, engineer, etc.), half the country wouldn't have to spend their youth acquiring debt that'll take the rest of their lives to pay off.

$10,000 degrees would exacerbate many of the problems post-secondary education faces. Fewer degrees is the answer, not more. There's a world outside of college. Perhaps young Americans should experience it before signing the next decade of their income away.