Not quite the Beatles -- still a lot of fun 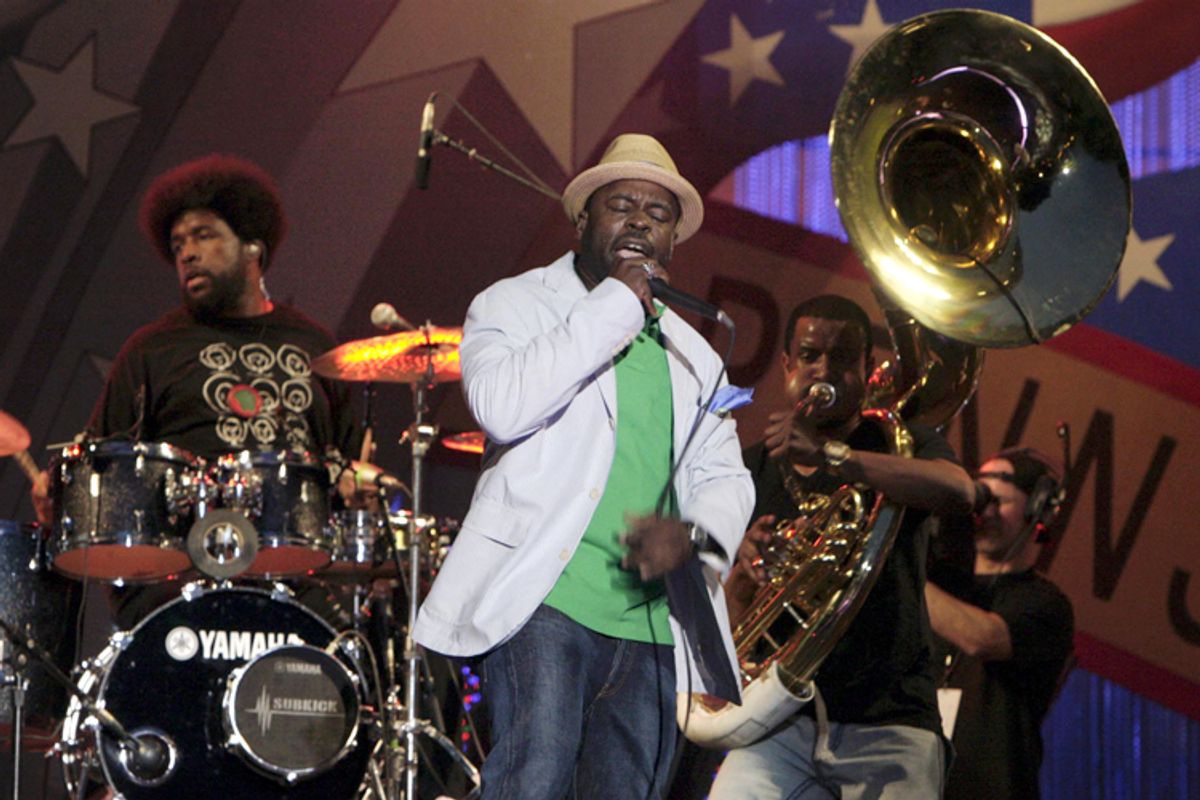 Rolling Stones, "I Wanna Be Your Man"

A Lennon/McCartney song that the Beatles eventually performed — but which was written by the pair on request for the Stones, who recorded it first in 1963. I really love the Beatles' crazed, driving rendition, but the Stones' skuzzier, glowering version has a lot to recommend it as well.

Searchers, "Money (That's What I Want)"

Originally recorded by Barrett Strong in 1960, the Beatles covered it on their 1964 album "With the Beatles." Their version, in turn, inspired a bunch of other British invasion performances, including this one by the Searchers. The singer isn't a patch on John, who truly sounded like he was going to hurt someone if he wasn't paid, but the music is pleasantly threatening.

The Rutles, "Cheese and Onions"

The Eric Idle/Neil Innes-conceived fictional Beatles parody group eventually became a real-life parody group, with several chart hits. "Cheese and Onions," released in 1978, is inspired most directly by "A Day in the Life," with the video inspired by the "Yellow Submarine" film — which it just about outdoes in invention. The mouse-sheep thing caught in the mousetrap and vomiting out a zebra costume is maybe my favorite bit.   (The 1969 date on the video is part of the joke; it's actually from the 1978 made-for-TV movie "All You Need Is Cash.")

Syd Straw and Marc Ribot, "I Must Be in Love"

A track from the 1990 album "Rutles Highway Revisited," which consisted of covers of songs by the Beatles parody band. Rock singer Syd Straw and avant jazz guitarist Marc Ribot turn in an absolutely irony-free performance, all stripped-down jangle and earnest avowal. So good it makes you wish there really was a Beatles version so you could listen to that too.

Rozroz, "When I Saw Sandman Standing There"

There can't be enough parodies of "Enter Sandman." I've mentioned my love of Pat Boone's version; Rozroz's mashup doesn't quite reach that level of genius, but it's still pretty great. James Hetfield seems to just be bubbling over with good cheer, while the folks in the audience appear to be genuinely disturbed by his stupid lyrics. Plus, "I Saw Her Sanding There" still sounds great; who wouldn't want to listen to that tune in any context?

Beatles songs have been notoriously difficult to license for samples. KRS-One manages to get "Hey Jude" in by interpolating rather than sampling. "We'll take the wackest song and make it better" is a sneer, and a righteous one; it is something of a miracle that he managed to find a way to turn Paul's vapid uplift into a worthwhile statement of purpose. "Remember to let us into your skin/Because then you'll begin, to master/rhymin', rhymin', rhymin'."

A brilliant, super-funky, super-tough use of a sample from "Do You Want to Know a Secret," one of the least tough, least funky Beatles songs extant. This may rival the Dust Brothers' work on "Paul's Boutique" for awesomest use of a Beatles sample ever (and if you're wondering why that album isn't on here, it's because I put it on the Beatles covers list already.)  I'd never heard of Poison Clan before, though they're apparently an important formative influence on the Dirty South style. Time to go do some downloading.

The Roots, "Thought at Work"

"Hey Bulldog" is a much more obvious hip-hop sample, but obvious doesn't mean bad. I'd often thought that I could pretty much listen to "Hey Bulldog" over and over forever, and this more or less confirms that.

Since we're moving out of hip-hop, I should probably mention DJ Danger Mouse's famous "Grey Album," which mashes up the Beatles' "White Album" and Jay-Z's "Black Album." Honestly, I've always found it overhyped and underwhelming — but I figured folks would wonder what happened if I didn't at least link to it.

The Monkees, "The Door Into Summer"

The Monkees' entire output could be considered one long almost Beatles cover. I'm particularly fond of this pseudo-"Paperback Writer," pseudo-"Ticket to Ride" effort. The would-be relevant lyrics are best ignored, but that supple bass seems to have fallen directly off of McCartney's writing table, along with the carnival tinkling, and those sublime, overdetermined harmonies. This album, "Pisces, Aquarius, Capricorn & Jones, Ltd.," really is surprisingly solid; it also includes Michael Nesmith performing the Beatles-do-country lament, "What Am I Doin' Hangin' Round?"

Everybody loves the Beatles, but few bands love the Beatles the way Cheap Trick loves the Beatles. They've done a number of actual covers over the years, but I think this tribute surpasses them all. The great "Taxman" riff is half-reproduced, half-alluded to in Rick Nielsen's usual magpie style, while Robin Zander's voice soars out of those distinctive harmonies with a power neither John, Paul, George nor Ringo could ever manage. If the Beatles were spawned at the trashy, decadent end of the '70s, this is what they'd sound like.

I'm sure most people wouldn't consider this any kind of cover, not even almost. But every time I hear it, I have to remind myself Liz Harris isn't performing "Across the Universe." Perhaps it's an intentional lift; perhaps she stumbled into it by accident; perhaps it's just a trick of my ears, or perhaps a sign of how integral the Beatles remain to indie folksy drifty rock — or to all rock, for that matter.

Pink Sapphire, "PS I Love You"

The '90s Japanese pop-rock group performs a song that has nothing to do with the Beatles' track of the same name.  I'd accuse them of deceit, but they seem so cheerful about it, it makes you think that maybe they really didn't know.