Apple and Amazon's big lie: The rebel hacker and hipster nerd is a capitalist stooge 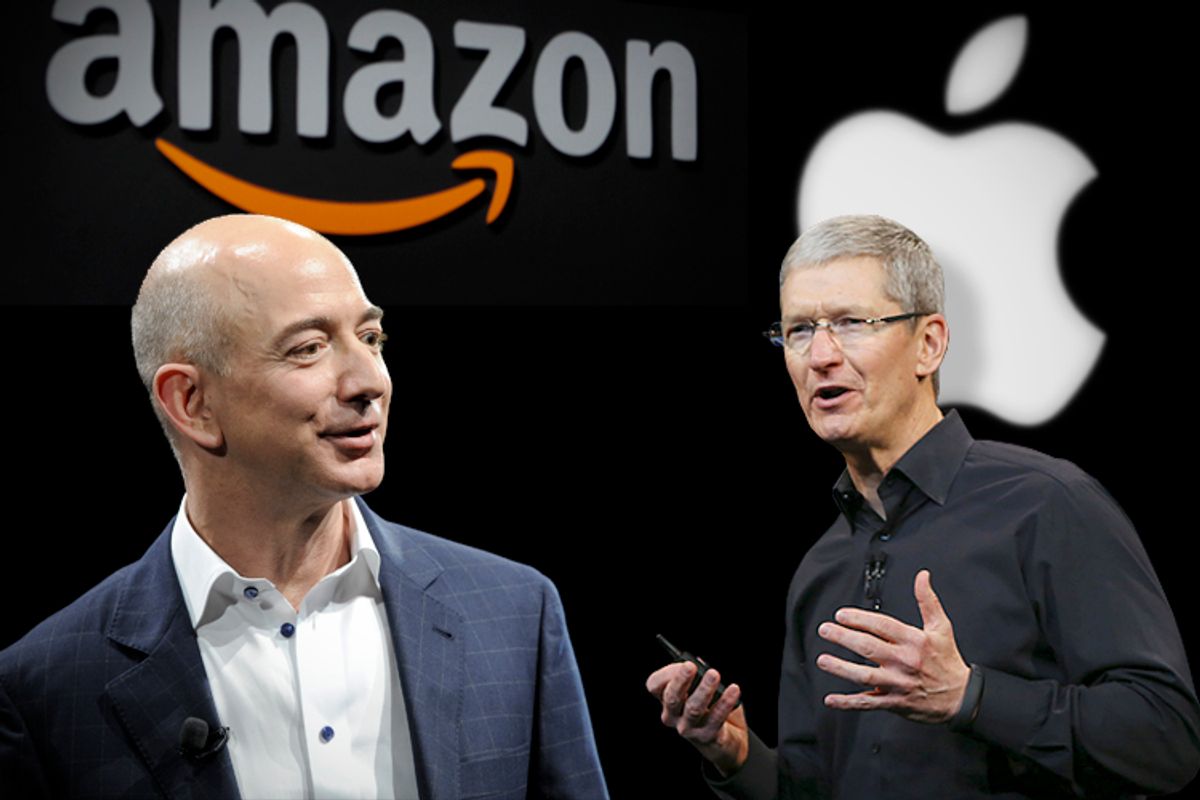 To this point it appears that the zeitgeist memes for 2014 are, first, the assumption that the future of our economy belongs to robots (see Tyler Cowen’s book "Average Is Over") and, second, that what’s left of the workforce — those whom Cowen calls “freestylers” working in synchrony with the ’bots — will have their job performance improved if they meditate.

Robots and meditation wouldn’t seem at first glance to have a lot to do with each other, but closer inspection reveals that they do.

This is so largely because the way in which the business world understands meditation (specifically forms derived from what Buddhists call “mindfulness”) is driven not by Buddhism but by science. Mindfulness Based Stress Reduction (MBSR) was developed in 1979 by Jon Kabat-Zinn, an MIT-trained scientist. In her cover story for the February 3 issue of Time magazine, Kate Pickert quoted Kabat-Zinn: “It was always my intention that mindfulness move into the mainstream. This is something that people are now finding compelling in many countries and many cultures. The reason is the science.”

And then there was the annual World Economic Forum in Davos where, according to Otto Scharmer (another MIT man), writing for the Huffington Post, corporate mindfulness is at the “tipping point.” Scharmer writes, “Mindfulness practices like meditation are now used in technology companies such as Google and Twitter (amongst others), in traditional companies in the car and energy sectors, in state-owned enterprises in China, and in UN organizations, governments, and the World Bank.”

So, the narrative conjunction of these two zeitgeist themes would seem to be this: In the future, “high earners” will work with “intelligent machines” (aka robots); the robots will drive them crazy; but they will have happy, productive lives thanks to neuroscience-certified mindfulness.

This narrative leaves out what few people are commenting on: corporate economics and Buddhism are two very different ways of thinking. For all of their countercultural pretensions, mega-corporations like Google, Amazon and Apple are still corporations. They seek profits, they try to maximize their monopoly power, they externalize costs, and, of course, they exploit labor. Apple’s dreadful labor practices in China are common knowledge, and those Amazon packages with the sunny smile issue forth from warehouses that are more like Blake’s “dark satanic mills” than they are the new employment model for the Internet age.

The technology industry has manufactured images of the rebel hacker and hipster nerd, of products that empower individual and social change, of new ways of doing business, and now of a mindful capitalism. Whatever truth might attach to any of these, the fact is that these are impressions that are carefully managed to get us to keep buying their products. In that very basic sense, it is business as usual.

As for Buddhism, contrary to popular reports it is not primarily about stress reduction for middle management. For the Search Inside Yourself program developed at Google, mindfulness training builds “the core emotional intelligence skills needed for peak performance and effective leadership…. We help professionals at all levels adapt, management teams evolve, and leaders optimize their impact and influence.”

Mindfulness is enabling corporations to “optimize impact”? In this view of things, mindfulness can be extracted from a context of Buddhist meanings, values and purposes. Meditation and mindfulness are not part of a whole way of life but only a spiritual technology, a mental app that is the same regardless of how it is used and what it is used for.

Buddhism has its own orienting perspectives, attitudes and values, as does American corporate culture. And not only are they very different from each other, they are often fundamentally opposed to each other. Indeed, one of the foundations of Buddhism is the idea of right livelihood, which entails engaging in trades or occupations that cause minimal harm to other living beings. And yet in the literature of mindfulness as stress reduction for business, we’ve seen no suggestion that employees ought to think about — be mindful of — whether they or the company they work for practice right livelihood. Corporate mindfulness takes something that has the capacity to be oppositional, Buddhism, and redefines it. Mindfulness becomes just another aspect of “workforce preparation.” Eventually, we forget that it ever had its own meaning.

While Tyler Cowen’s top 15 percent of earners struggle on with the stress of working with their robot comrades, pausing now and then to focus on their breath, where’s everybody else? For corporate mindfulness, the world looks a lot like it does in Spike Jonze’s "Her": there are no poor people; everyone is walking around with the latest high-tech gizmo stuck in their ears. In short, mindfulness is for the world of the winners. As for the workers in Amazon warehouses, their only stress reduction will be what it’s always been: a beer after work. And it won’t be a craft beer, either. That’s for their betters.