Eat more roadkill! It's the most ethical meat

When legally and safely obtained, roadkill meat is a great choice 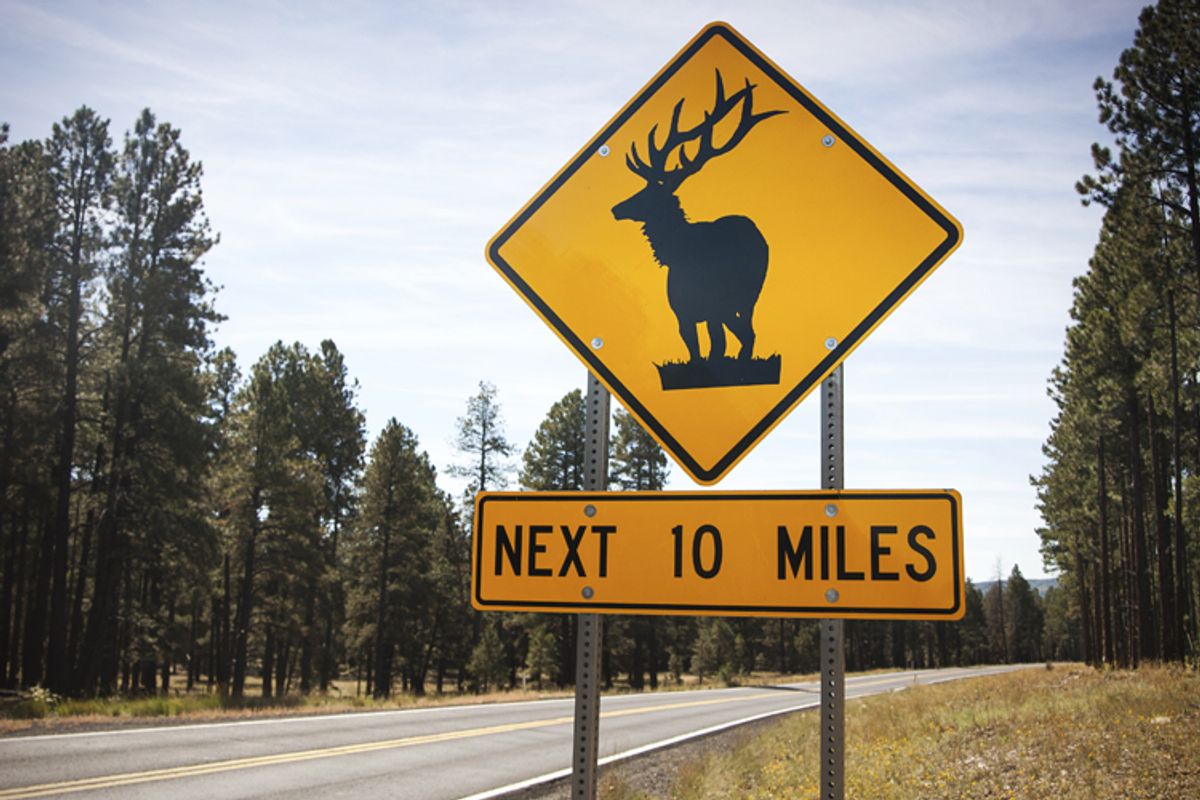 In his 2008 special "Chewed Up," comedian Louis C.K. confessed his hatred of the “f*cking deer” pooping all over his lawn. As luck would have it, he found himself bearing down on one of these loathsome creatures on his way to run errands for his wife. He really wanted to mow the deer down. Instead, he heeded the better angels of his nature, stopped the car, and waited for it to cross the road. To his aggravation, the deer refused to run away. Instead, it committed slow suicide by crashing into his car, then disappearing into the dark with various body parts wobbling. More pissed off than ever, Louis C.K. resumed his drive to the store, lest the missus get mad at him for returning home without a year’s supply of toilet paper — presumably to pass out to the deer using their backyard as a bathroom.

In Louis C.K.’s story, the silly creature did the dying but he’s the one being overrun by the wildlife. In this country, so many deer are killed by cars that this type of collision gets its own safety-agency acronym: DVC, or Deer Vehicle Collision. The numbers vary, but the annual deer fatalities in the United States tally up to millions. That grim sum doesn’t include squirrels, birds, raccoons, rabbits and other critters that usually cause little to no damage to moving vehicles, for the “accidental” killing of wildlife is as much a product of the automobile era as is the invention of the suburb. In Finland, it's gotten so bad that they're attempting to spray the reindeer with glow-in-the-dark paint to try to reduce traffic accidents. Here is my question: How would (the now ex) Mrs. CK have reacted if Louis had thrown the deer in the car, brought it home and cooked it up for supper? Would she have thanked him for putting fresh meat on the table, or run away screaming?

I’m in the “thank you” camp, which is why the recent headline in the Bangor Daily News, “With pay frozen, Maine state troopers tell lawmakers they rely on road kill to feed families,” made me laugh out loud. The headline was supposed to signal pathos, but the fact that state troopers get first dibs on roadkill has long been considered one of the job’s perks. Several decades ago during a snowstorm in northern Maine, my father's large American car collided with a 2,000-pound bull moose, making it “his” roadkill to harvest if he wanted. My mother had no interest and my dad had no clue, so all that fresh meat went to the troopers.

In Maine, hunters can go their entire lives without ever winning the lottery for a coveted moose tag, and the number of deer that can be legally harvested in a season is usually no more than one per hunter. Having a tag is no guarantee that the hunter will be successful, so in lean years, the only way to get venison in the freezer is by lucking on fresh roadkill. My boyfriend John and I tried several times to get our hands on whitetails we'd spotted lying on the side of the road, only to discover that someone else had driven by first and already claimed it.

During the rut, which is when horny bucks routinely die for love, it’s common to see guys skulking around in pickups, hoping to scoop up a fresh one by the side of the road. However, you can’t just run off with roadkill, not even if you’re the one who ran into it. The same legal framework governing regular deer also applies to salvaged roadkill, meaning that every harvested animal has to be registered by the state so wildlife biologists can keep track of populations and monitor other factors, such as overall condition and diseases. Any person caught driving around with an untagged deer is guilty of poaching, even if that deer was scraped off the highway. Another Mainer, author Stephen King, illuminated the problem when he invented a homicidal car named Christine. Though roadkill is an inelegant means of obtaining venison, it’s not outside the bounds of possibility that do-it-yourselfers might install cow-catchers in front of their trucks and just mow over the wildlife -- this hunting-by-truck is what the tagging laws are in place to prevent.

To legally salvage roadkill, you have to call the game warden or a trooper, who will come by, inspect the animal, confirm that you didn’t hit it, and then assign your deer a number. Because time is of the essence if fresh meat is the goal, some states are trying to relax these rules, even as roadkill salvaging has emerged as a new trend in environmentally conscious eating. Most varieties of Buddhism accept the consumption of animals, especially if the animals weren’t killed for the express purpose of being eaten. Eating roadkill is tolerated even by the father of the animal rights movement in the United States, Australian philosopher Peter Singer. It’s the carnivore’s version of fruitarianism, the adherents of which advocate only eating fruit that has already fallen from the tree.

Arguably, the most famous roadkill chef in the United States is Granny from “The Beverly Hillbillies,” but the U.K. is populated with real-life variants. Taxidermist Jonathan McGowan eats no meat except for roadkill. Emeritus professor Steve Baker spent his career writing seriously about human-animal relations and now photographs roadkill in order to prompt viewers to rethink their relationship to wildlife. Fergus Drennan, better known as Fergus the Forager, starred in a “Roadkill Chef” series produced by celebrity chef Jamie Oliver, and is about to embark on a year of living entirely on wild foods. Both the breadth of Fergus’ palate and the creativity of his cuisine are strikingly sophisticated, revealing that the greatest constraints on this form of cuisine are the law and the imagination. Ethical foragers are mindful of the laws protecting the land, so as to ensure that balance is maintained and that wildlife of all kinds continues to flourish for future generations.

Wild food foraging would be impossible to sustain if the whole world relied on it, but the larger point that experimental eaters such as McGowan and Drennan raise is that there is nothing wrong with it, and perhaps a great deal that is right. As food supply systems become increasingly precarious, roadkill serves as a reminder of nature's idiosyncratic bounty.  Porcupine, rabbit, raccoon, beaver, crow … the list of routinely smashed animals goes on and on. Why not eat them, since they’re nutritious, delicious and already crushed by the wheels of progress?

If we as a society are going to drive cars, it only seems right to honor the departed by feeding the hungry. Roadkill isn't a good starting place for nose-to-tail novices, but it's healthier than factory-farmed meat as long as you know what you're doing.  It's fairly simple to tell if a roadkill mammal has potential: look it in the eyes. If it still has them, it warrants further investigation. I've served salvaged venison at my table and concluded that, for several reasons, it can be better than venison from the hunt. My dinner guests agreed with me, because the venison agreed with them.