"True Detective" has a women problem

Yes, it is told through male eyes. But "House of Cards" proves a show about men can have three-dimensional women 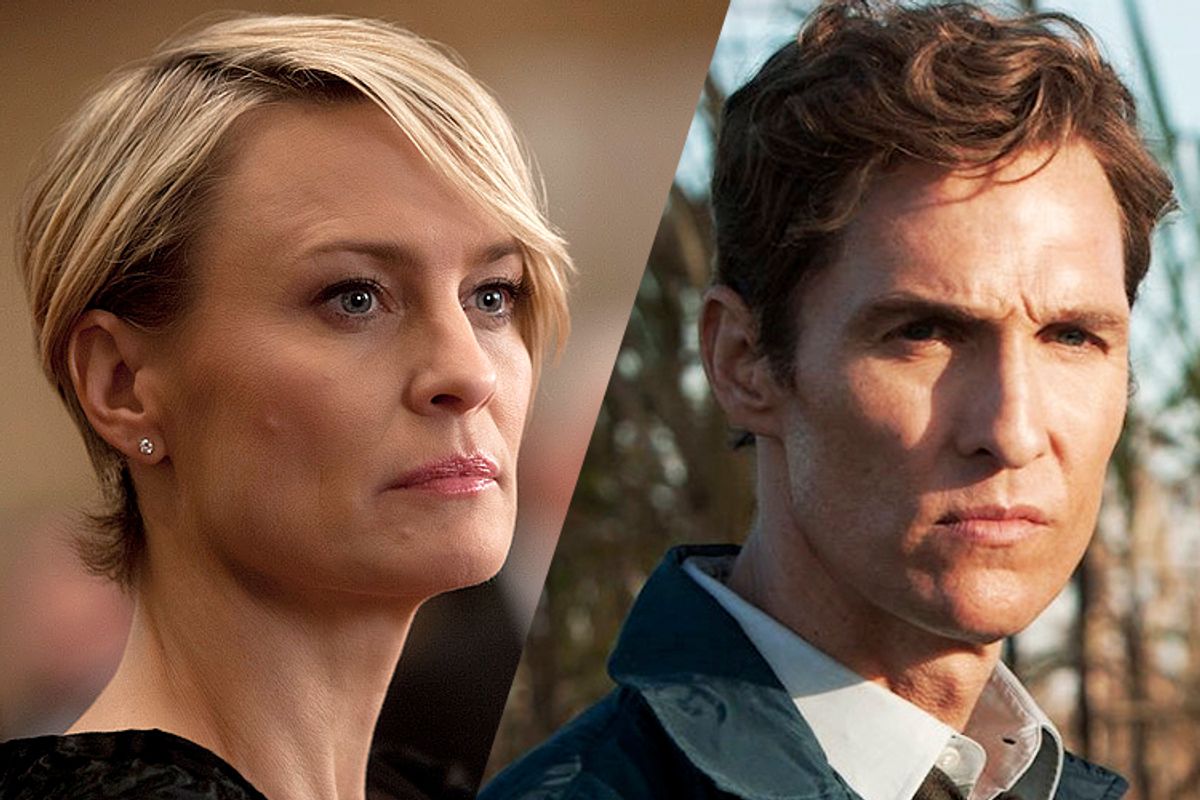 Much has been written about how "True Detective," for all its gripping, dark storytelling, is seriously lacking in the female character department. The ladies are essentially either spiteful jezebels, scorned wives or dead whores.

"True Detective" is a buddy cop whodunit with major star power, accelerating in mind-bending tension throughout the season. Matthew McConaughey’s Rust Cohle is a cerebral detective who spouts nihilistic lines like “Maybe the honorable thing for our species to do is deny our programming, stop reproducing, walk hand in hand into extinction…”.  Combine this existentialist rambling with acid flashbacks left over from his days as an undercover narc and we have a deliciously unreliable narrator.

Woody Harrelson plays Marty Hart, the family man with a mistress on the side, aka the stereotypically righteous hypocrite. He pontificates about how family gives a man necessary boundaries… boundaries he himself could never stay within. His character is the id-soaked counterpoint to Rust’s detached and philosophical demeanor. Rust is all too familiar with the hypocrisy and cruelty of the world, while Marty can’t help but personify it.

These men are morally conflicted, intelligent and often defy our expectations. For example, after a woman confesses to murdering her baby, Rust calmly tells her “if you see an opportunity, you should kill yourself.” Indeed, the show is about the horrible things that men do to women.

But what about the females in the show?

Marty’s lover, Lisa, ranges from topless to scorned, hissing “you need to respect me!” as he enters an elevator full of men. Maggie, Marty’s wife, ends up sleeping with Rust, but that was completely foreshadowed in episode three when he was drinking a beer in her kitchen. As Marty says, his “true failure was inattention” and Rust, sweat drenched and down to his undershirt, showed her what her husband sorely lacked.

It seems as if when Rust says, “Women and children are disappearing, nobody hears about it, nobody puts it together,” this also applies to female character development. We have little if any insight into any of these women’s backstories.

However, there’s a show out there that could give "True Detective" a crash course in just this topic. "House of Cards" is about power – in this case, political power. Centered around politicians, those egocentric, manipulative opportunists, what the show does brilliantly is create women just as contemptible and complex as the men.

"House of Cards" brings us one of the most written about, compelling female characters on current television, Claire Underwood. She’s the wife of Francis, the show’s archvillain and main character, and together they form a ruthless power couple. By day Claire is an environmental lobbyist and by night she schemes with her husband over a cigarette. We know she wields as much influence over his life, and the story, as he does. It’s clear that without her he’d be a fraction of what he’s risen to in Washington, D.C. Behind every conniving man is a Lady MacBeth screwing his courage to the sticking place.

Claire’s reprehensible actions are evident early on when she has her operations manager, Evelyn, fire half of her staff – 18 people to be exact – only to then dismiss Evelyn after she does the dirty work. That’s cold, lady.

Later, in the first two chapters of season two, we watch her delicately apply makeup while news of Zoe Barnes’s suicide-by-train plays on the news (it’s obvious she knows that Frank pushed Zoe). When a pregnant partner threatens her with a lawsuit, Claire cancels her health insurance, saying “I’m willing to let your child wither and die inside you if that’s what’s required. Am I really the sort of enemy you want to make?”

We then soon learn that she’s also a rape victim with the emotional wounds just as fresh decades after the crime. She’s simultaneously vulnerable and villainous, playing both cards with ethereal class (Robin Wright deserves every accolade for her portrayal). Claire isn’t quite the feminist hero that some have written about. Rather, she’s a three-dimensional character who’s just as integral to the story as the men.

For a drama as focused on masculinity as "True Detective," it’s not a requirement to have the female characters as at the forefront as Claire Underwood. "Mad Men" also focuses on the cruelty of men toward women, but its females are also three-dimensional and unpredictable. For example, in season one, Betty Draper’s dreams of escaping suburban ennui are squashed. With a cigarette dangling from her mouth, she reacts by shooting her neighbor’s birds! "Breaking Bad’s" Skyler White, wife of least likely drug kingpin Walter White, is at first the principled and controlling contrast to Walt’s moral entropy. Her character finally becomes interesting when she stops opposing Walt’s drug empire and starts laundering his meth cash. She’s both devoted mother and accomplice.

"True Detective’s" women haven’t become as memorable just yet. As Marty puts it, Rust “tastes colors" and his synesthesia may even be intertwined into the plot (can he taste the Yellow King?). There's not a single throwaway gesture or trait to these men, but the ladies have so far been disposable.

It’s completely fine for women to pole dance, trick turn and child rear, but let them defy our expectations in some way and go beyond mere reactions to male actions. Let them be just as morally conflicted and enigmatic as the men.

Yes, "True Detective" is told from the POV of the male leads; I get it. The show makes the men chase the devil while dealing with their own demons. We see the world through their eyes only, shading women as both mystery and mundane. Therefore, at its logical storytelling conclusion, the women become reflections of the men. But couldn’t Maggie shoot some birds like Betty Draper did instead of screwing her husband’s partner?

Don’t get me wrong – "True Detective" is a great show. Episode four’s stash-house raid was single-shot epic filmmaking rivaling Alfonso Cuarón (closing with a Grinderman song catapults the scene to perfection in my book).

Willa Paskin wrote a wonderful piece on Slate about how the show gives us glimpses of the mysterious world of women that the men can’t seem to penetrate. Paskin is willing to wait until another season to see "True Detective" flesh out these women beyond mere reactions of men. "House of Cards" proves that we shouldn’t need to.