Jake Gyllenhaal: Movies are like dreams -- "I'm thrilled by the open ends and questions"

The star of the new movie "Enemy" on playing a double role, ambiguous endings and acting opposite a tennis ball 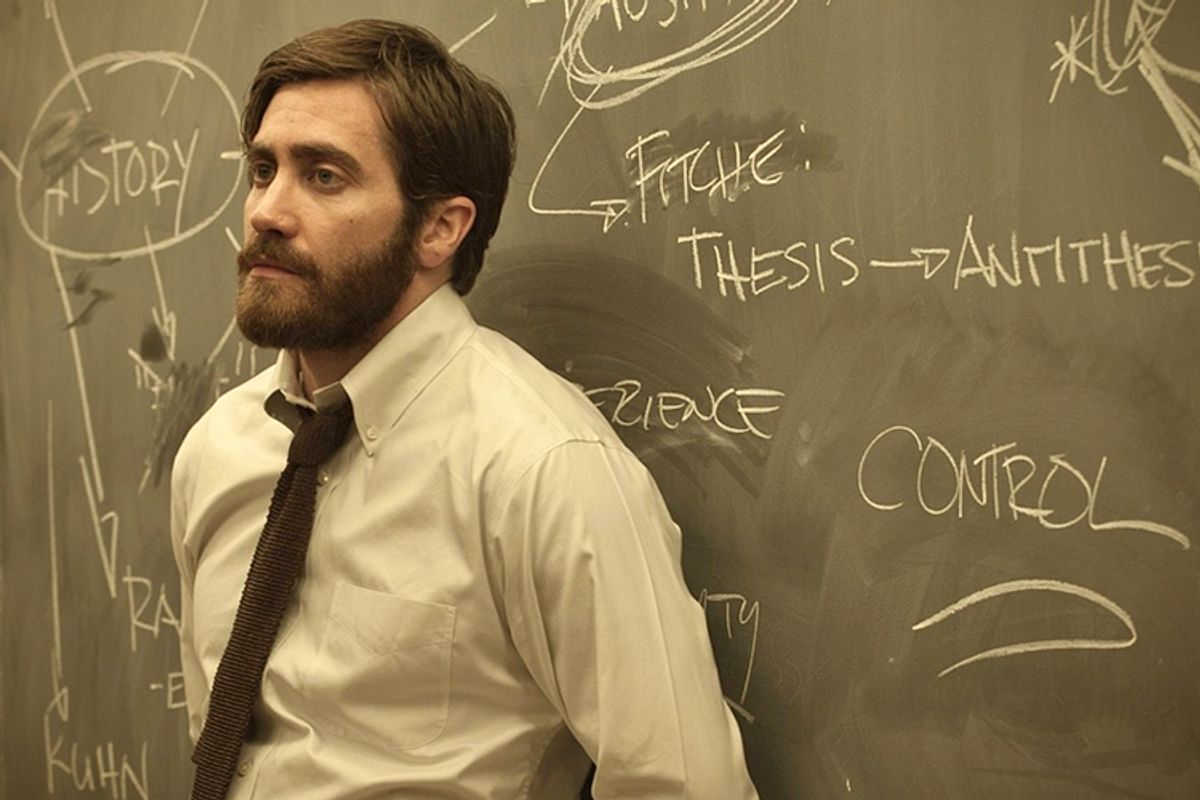 Who knew Jake Gyllenhaal was such an artiste?

The hunky star has spent the past several years a bit removed from the spotlight, working on thinky projects like "Source Code," "End of Watch" and "Prisoners" -- not a Marvel flick in sight! He's reunited with his "Prisoners" director, Denis Villeneuve, on one of the strangest, most compelling indie flicks in recent memory.

"Enemy" (out March 14 in New York and March 21 in Los Angeles and elsewhere) tells the story of a college professor who becomes obsessed with his doppelganger, a famous actor. Both men are played by Gyllenhaal, who acted opposite a tennis ball in order to create the effect. The concept originates from the novel "The Double," by the Portuguese Nobel laureate José Saramago, but heads in directions no viewer, not even a Saramago completist, could have predicted.

In a recent interview in New York, Gyllenhaal's temperament suited his more recent filmography: He was cool, cerebral, and preoccupied with questions of identity -- some of which flew over the interviewer's head, but, like "Enemy," it was quite a ride. "To me it’s really about being inspired. There’s no better fuel than that," Gyllenhaal said. "I’m sure you do many, many, many interviews and there are some that are inspiring or exciting before or during." This was one of them!

I was struck that one of your characters was an actor -- and I was wondering the degree to which “Enemy” is about your experience of fame?

I don’t know if it was about that, as much as about identity. I mean, obviously you can probably correlate that with anything we do or that we’re involved in. There is that aspect of the movie that’s interesting that I don’t think we even really realized was [what] we were doing. When I call him and I say in a way that I’m a fan of his work, but at that time in the movie it’s a manipulation to try and meet him ... There are a lot of things at play in that moment and that is definitely one of them. There’s a sort of sense of desperation in terms of him trying to find his own identity and at the same time seeking an identity, or someone else’s identity, or the perception of that to understand his own. So that’s at play definitely. But I think we do that all the time, regardless of whether it’s about fame or not.

It’s really about … We try and connect all the time. I think that gives us a sense of who we are. When you meet somebody you connect with, like, “Oh wow. That’s amazing." You know?

Whether you're famous or not.

Yeah. I mean, to me, I think of my excitement that I get to hang out with my friends who I love hanging out with. I don’t know if that would be similar, but there’s an excitement whenever people are of like minds.

Did you this time?

No, I didn’t. I do generally read source material. In fact, that type of preparation is really informative to me usually. But not in this case because it was such a …

And then I decided, because of what he talked about, the idea of identity, the idea of sort of the exploration of intimacy, sexuality, connections of all kinds with yourself, with other people, commitment — all these things — to yourself, to a relationship. I decided not read the the book because I felt like it would somehow hinder this exploration. Sometimes the literary form makes it hard to interpret something cinematically because you get caught up in the things you love so much about the words and I really actually didn’t want to get caught up and I knew I would because I knew the script was already different from the book.

Then you start going, “Well, I love this thing about the book. Can we maybe put that?” As opposed to how do I experience and how do I feel about it? And I think for Denis it was really important, the feelings that came up so we could express those from the experience as opposed to from the book.

I saw the film yesterday and really enjoyed it, but you can’t deny that there are aspects of it that are challenging. And it’s not the first film of yours like that. As your career goes on do you find yourself more drawn to things that push you? Are you playing against any sort of image?

I mean, that’s a very conscious question. Meaning, am I conscious of the choices that I’m making? And I think I can’t make decisions like that and be creative. You know? All I can do is try to listen to something — a story that’s being told or a person who’s making the movie or the script that I read — and say, does this move me? Would I be excited to help translate this onto screen? And that’s it. Someone just asked me, “Have you always had a bucket list where you wanted to play two characters in a movie?” You know -- is that some sort of actor indulgence or something? And that was the implication and I’ve never thought about that, ever. In fact, it was more about this idea of what is intimacy? How do we search for our own identities—separate from a relationship, in a relationship? What is a sexual relationship? What is an intimate, romantic relationship? These two characters are struggling with both of those ideas and I was fascinated with that, and hopefully will continue to be fascinated with that for my whole life.

Yeah, and to me the experience of making the movie was the best part. It was one of the best experiences I ever had. We would go shoot during the day and then at night we would all — usually me, Denis the director, and Nico [Nicolas Bolduc] the cinematographer, and sometimes other crew members and some of his cast — would go out to dinner and we would discuss what we shot and how it would move into the next day.

Right, and when you have a larger or more elaborate production it’s not as easy to drill down and do it.

Hopefully you can explore in the structure, the space that you’re given. But to me it’s really about being inspired. There’s no better fuel than that. I’m sure you do many, many, many interviews and there are some that are inspiring or exciting before or during. Things that you never knew would be exciting during and then they are and you’re engaged. That to me is the same thing and maybe you would say, “Oh! I would love to interview this person or that person,” but ultimately you never know what’s going to be fascinating …

It’s kind of in the moment …

I think I always had thought of myself as not a very technical actor and I think I learned during the process how much I love the technicalities of moviemaking. Because you have to follow, particularly in the scenes you’re playing against yourself, some very, very intense rules. Because we work on a stop-motion camera and you want it to be right and the eye lines and how things move and what’s real even in an imaginary world. You know, you’re looking at a tennis ball. You’re listening to your own voice in your ear. Melding the creative world with the technical world, it sort of felt like a science along with that sort of artistry too. And I never thought of myself as someone who would love that world so much. A lot of people ask me questions like, “Oh, if you do a movie and there is a tennis ball or there’s a green screen behind you, do you like that?” I actually didn’t realize how much I loved that.

Right, a lot of people complain about that in other movies.

Yeah, a lot of people say, “I don’t like that. I want to really interact with someone.” And I do like interacting with other people so much, other actors. Watching another actor do amazing work, for me, is my other favorite thing. But I never realized how much I love the technical aspects of moviemaking. You feel like you’re helping make a movie even more when you’re doing those things because so much of moviemaking — the filmmaking process — is so technical.

I’m curious how you feel about the film having an ambiguous ending. Did that bother you when you were reading the script, when you were making it or do you love it?

I love it. I look at movies like dreams in a way. We have them. There’s something to be learned there. Some people might say they are these things at night that ultimately just keep your neurons going and keep your brain warm. Other people might say they’re open for interpretation. Other people have many ideas. But, to me, I think movies are like that. When you wake up from a dream sometimes you’re moved, sometimes you’re terrified, sometimes you have no idea what happened. And I like all of those things that happen during it. But most of the time you wake up and go, “Wait a second. This just happened when I was asleep. But I don’t know what it’s about.” And I like that about movies and I think you sit in the dark, much like you do when you’re dreaming and you experience something. So I am thrilled by the open ends and the questions. I think they’re what it’s all about.