McConnell's Tea Party nightmare: He can't kill them -- because they run his party

The embattled GOP leader says he’s going to vanquish the wingnuts, but he can’t. They’re now his party’s mainstream 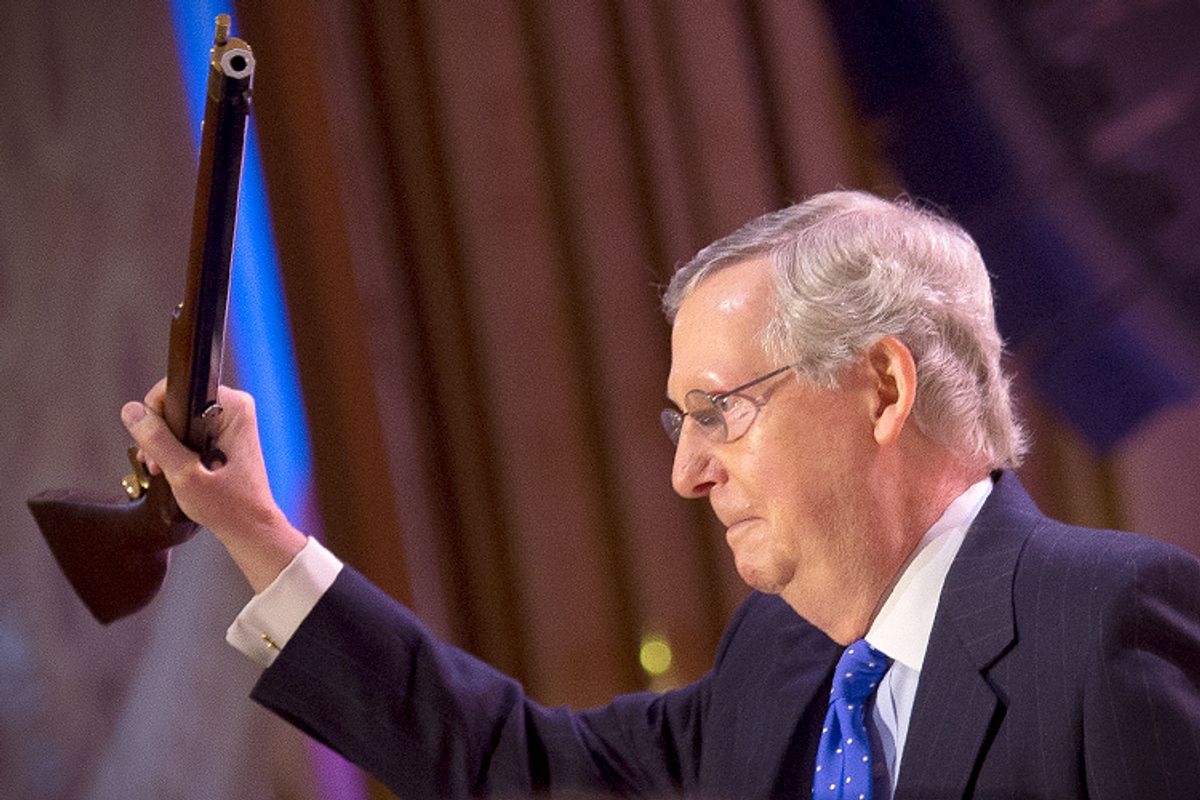 OK, Sen. Mitch McConnell wasn’t brandishing a rifle at the Conservative Political Action Conference Friday in order to shoot Tea Party marauders. The unpopular Senate Minority Leader was just trying to avoid being booed by the crowd, using the most reliable prop on the far right, a gun (President Obama in handcuffs would probably work well too). But the embattled leader did go ballistic this weekend, figuratively, on his party’s restive far-right activists. The Tea Party is not going to be able to knock off GOP senators in red states, McConnell warned.

"I think we are going to crush them everywhere," McConnell told the New York Times. "I don't think they are going to have a single nominee anywhere in the country."

Not surprisingly, McConnell is starting with his own Tea Party challenger, Matt Bevin. He released a new ad trashing not only Bevin but the Senate Conservatives Fund that’s backing him, charging the group “solicits money under the guise of advocating for conservative principles but then spends it on a $1.4 million luxury townhouse with a wine cellar and hot tub in Washington, D.C.” Wine and hot tubs, you know what that means – these folks are probably just uppity liberal hypocrites in conservative clothing!

But McConnell’s crusade comes a few years too late. Clearly the Tea Party is already the mainstream of his party.  Just last week, a Washington Post-ABC News poll showed that Republican voters say a candidate’s Tea Party ties make it more likely they’ll support them, by a margin of nearly 2-1. Unfortunately for the GOP, Tea Party affiliation makes the broader electorate less likely to vote for a candidate by about the same margin.

Back in 2010, McConnell decided that if you can’t beat the Tea Party, you join them. After his candidate for Kentucky’s open senate seat lost to Tea Party insurgent Rand Paul in 2010, McConnell embraced his new colleague, and now he relies on Paul’s support to hold off Bevin. For a time he shifted right, encouraging the 2011 debt-ceiling standoff and declaring his far-right colleagues had discovered they had “a hostage worth ransoming.” That of course let Tea Party Sen. Ted Cruz think he could try it again. Cruz ultimately failed when McConnell joined Harry Reid in ending the game of chicken, but his show of courage was too little, too late. The Tea Party has the power; McConnell can’t fight them without Democrats.

Even some Republicans who the media oddly place in the “moderate” or pragmatic camp don’t belong there. Wisconsin’s scandal-challenged Gov. Scott Walker has bragged about being “the original Tea Party in Wisconsin." In a popular CPAC session using Wisconsin as “the model” for union-busting and right-wing coalition politics, the RNC’s Reince Priebus credited “total and complete unity between the state party, quite frankly, Americans for Prosperity, the Tea Party groups, the Grandsons of Liberty. The [Glenn Beck-instigated] 9/12ers were involved. It was a total and complete agreement that …everyone was going to run down the tracks together.”

And while it’s true that Congressman Paul Ryan, endorsed in 2012 by the Tea Party Express as “the strong Tea Party candidate for Vice President,” has had tension with Tea Partiers since he partnered with Democratic Sen. Patty Murray to pass a budget, at CPAC Ryan downplayed the notion of a rift between himself and the party’s right, comparing intra-party debates to a “family reunion” among Irish-Americans. (Actually, nobody in my family wants to take lunches away from poor children, not even the Republicans among us.)

Now it is true that Tea Party challengers in three red states – Kentucky, Mississippi and Kansas – are having a hard time getting traction against reliably conservative GOP senate incumbents. One poll has McConnell up 42 points over Bevin; another has his lead at 26 points. Thad Cochran and Pat Roberts are likewise leading their Tea Party challengers.

But oddly, McConnell – and the Times – don’t even mention Georgia, where five extremists have been virtually tied for the lead in the GOP senate primary to succeed retiring Saxby Chambliss, competing for the opportunity to run against Michelle Nunn. The most extreme of the five, U.S. Rep. Paul Broun, just pulled ahead in the last PPP poll. Broun would abolish the IRS, the EPA and the Department of Education, and wants the U.S. to pull out of the United Nations. He’s called evolution and the big bang theory “lies from the pit of hell.” Interestingly though, Broun is the only GOP candidate with a (slight) lead over Nunn in an early head to head match up; the others trail her. Presumably, in a one on one race, Nunn and the Democrats would have a lot to work with battling Broun. He is an early contender to be the Todd Akin of the 2014 cycle.

“I know this: Politics doesn’t like losers,” McConnell told the Times, suggesting defeats in primaries in places like Kentucky and Mississippi would discourage Tea Party insurgents. “If you don’t have anything to point to, it is kind of hard to keep it going.”

But while McConnell has a big lead over Bevin, he’s trailing his Democratic challenger, secretary of state Alison Lundergan Grimes. It’s far too early to count McConnell out, but it’s worth asking whether the far-right’s animus towards McConnell will make him the ultimate loser in November.