Novelist and "Real Housewife" Carole Radziwill: Can a Bravo star be taken seriously in the lit world? 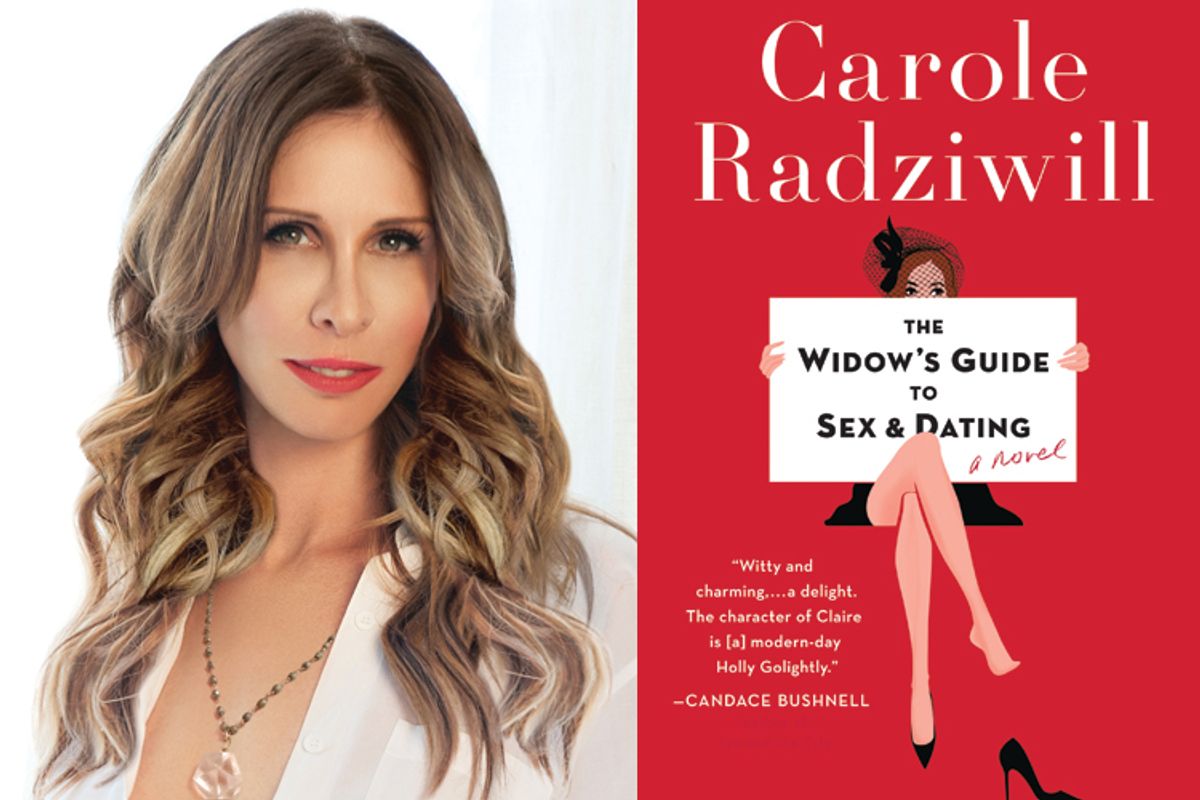 No one could claim Carole Radziwill isn't a hustler.

The former ABC News producer turned great tragedy into a moving success story. The death of her late husband, ABC colleague and Polish royal Anthony Radziwill, shortly after that of his cousin John F. Kennedy Jr., and Carole Radziwill's best friend Carolyn Bessette Kennedy, gave rise to the thoughtful and widely acclaimed memoir, "What Remains." And, as she promotes her new comic novel "The Widow's Guide to Sex and Dating," Radziwill is also a part of the bickering and squabbling on "The Real Housewives of New York City" -- whose new season debuts tomorrow.

The "Housewives" franchise can certainly be a launching pad -- Bethenny Frankel, for instance, capitalized on her "New York City" berth with the Skinnygirl spirits brand. Various "wives" in the franchise (from New York to New Jersey to Atlanta) have produced quickie books attempting to cash in on Bravo-fueled fame.

But Radziwill's book is different -- if only because it was long underway at the point she decided to join the reality show. It's a serious attempt to do something comic, a novel about grief and starting again that feels like the product of lived experience. In its strangeness for a book by a Housewife, it fits Radziwill's on-screen persona: She avoids, generally, the bickering among her cast mates, preferring to be a wry commentator on the action.

It makes sense, given the circumstances under which she joined the show, after an internal debate over perceived seriousness versus the advantages of a boost in sales: "The downside is there are a lot of people who bought my first book who would never watch the show and might think less of me because of my involvement in it," Radziwill told Salon. "On the other hand, there are millions of people who do watch the show and would learn about me and Google and find out more and end up buying the first book."

"Publishing isn't what it used to be," Radziwill admits. But she's certainly making the most of every opportunity available to her in the new paradigm.

Talk to me about the differences between your more serious memoir and your lighter novel.

"Widow's Guide" is not meant to be a guide in any fashion. But I think of it as a comic relief to the tragedy that was my first book. Any writer -- or really anyone who makes a film that gets any kind of acclaim -- the second time around, you do think about that. You try not to think about that, but let's be honest. Especially because the story of my first book was really well-received and people really loved it. It's funny when you write memoirs -- no one thinks you're an unlikable character! But when you write a novel, plenty of people will find the opportunity to say, "I didn't really like Claire." And that really hurts! Because I love Claire!

I don't think characters need to be likable, but I think she is! Characters don't have to be likable, but if they're well done, they have to be human. As my grandma Millie used to say, it takes all types to make a world. I'm a bit of a novice, so I take it much more personally than I should. I want people to really like my book, because they really liked the first one. Maybe that's a beginner's mistake -- once you've done the first one, you understand that the audience is like the public. Some people will love it, some people will find it interesting, and some people won't identify with it. And that's OK.

Are you over the first-timer's jitters that come with writing a book?

More confident? ... I sure as hell hope so! But I can't guarantee that. It's interesting because when I was writing the memoir, there were times when I thought it'd be so much easier just to make it up. The transition between scenes would be smoother. And when I started writing "Widow's Guide," it wasn't the case at all. Fiction writing is much harder, for two reasons: First, you're limited by your imagination, and that's incredibly daunting. You keep thinking you can come up with something more interesting. Also, the burden of truth is greater in fiction. When you're reading a memoir, you're conscious of taking a leap of faith with someone. You don't do that as much in fiction. The level of detail when you're writing fiction has to be much greater; they all have to behave perfectly consistent with everything -- what they wear, how they behave -- because I always think with one false move, the reader's pulled out of the story.

Life kind of writes the script for you with a memoir.

I thought for a bit I would fictionalize the account of my life story, but it was too unbelievable. The Cinderella story that ended up not happily ever after ... She marries a prince, but he gets cancer, and her best friend dies three weeks before her ... No one would believe that really happened.

OK, either way -- but you began your TV career at an interesting moment, with your novel almost completed. Were you worried about how it'd make the reading public think of you?

I was nearly done with "Widow's Guide" when I started the "Housewives" show. And the downside is there are a lot of people who bought my first book who would never watch the show and might think less of me because of my involvement in it. On the other hand, there are millions of people who do watch the show and would learn about me and Google and find out more and end up buying the first book. [Bravo personality] Andy Cohen is an old friend, and when he asked me to do the show, it was definitely out of my comfort zone and out of my experience, having spent most of my career behind the camera at ABC News, and then writing. The show is the antithesis of writing -- writing's all about introspection, and that show doesn't give you it. But "Widow's Guide" was nearly complete; I thought I'd talk about it, and it's a great platform to let people know about it, and they can buy it, and that's great. But I didn't expect "What Remains" would go back on the best-sellers list. That, I think, had never happened in publishing; that book's been out for six or seven years. And I didn't even mention it, really, but viewers knew my background or found out about it, and "What Remains" went back on the New York Times best-sellers list. When that happened, I thought, "Wow."

It's hard to navigate the show in terms of my career sometimes. But also it's a powerful platform to get the word out. What writer wouldn't, though? You have to hustle a little bit to sell books, now. Publishing isn't what it used to be. It was an opportunity to raise my profile a little bit and have people learn about me, and if they liked me they could look at my work -- which they did, and maybe they'll do again. There'll always be haters who say, "I can't believe you did that show, you used to have a serious career as a journalist and a writer -- but that's OK, too. If I look back on my life when I'm 80 and this is the goofiest thing I've ever done, I'm OK with it. I've done serious things and had serious things happen to me. Maybe this is the comic relief.

You can be serious and frivolous all at once, I think.

After my husband died, it took a while, but I definitely found the humor, or at least the absurdity of life, how we think we can plan things -- I gave my sense of humor to Claire early on in "Widow's Guide."

Do you hope people take anything from the book?

The title is very funny, I have to credit my old family friend Christiane Amanpour. She's the one who titled it. She wants me to make sure to tell people she came up with the title! But it just came from me telling people funny stories about my life. She knew my husband very well, and we were all very close -- she told me I should keep a journal called "The Widow's Guide to Sex and Dating." I decided to keep the title, though it is a little tongue-in-cheek. I gave Claire a sense of humor but kept it tongue-in-cheek. I didn't go through the five stages -- there are other books that do that well. I got her fairly quickly to acceptance -- or, at least, "Oh, shit, now what?" Someone said this to me a couple of years after my husband died: All beginnings are disguised as endings. That's a thing I try to think about. It took me a while to get there, but I did. I'm not just saying that for myself -- I think anyone going through a divorce or breakup will relate to Claire.

Do you consciously think about reinventing yourself?

I don't think about it that way! I just think about it as my life flowing and winding. There is something about reinvention, though -- it's a very American story. I had one dream in my life. It was to get out of my small town and see the world. We didn't have any money, so I didn't know how I'd do that, but my dream was to be a journalist and report on stories and try to make a bit of a difference. I did that. Everything after that's been a byproduct of that dream. And if you think about the show, when Andy called me -- listen, it's not like I was thinking of having a baby or getting married or something that really changes things. It's a TV show, life goes on. It's important to be open to what the universe offers you; it's not my job to analyze my life. It's my job to live it.