Watch CUPID shoot an 80,000 volt stun gun: A demonstration meant to start conversation on the future of technology 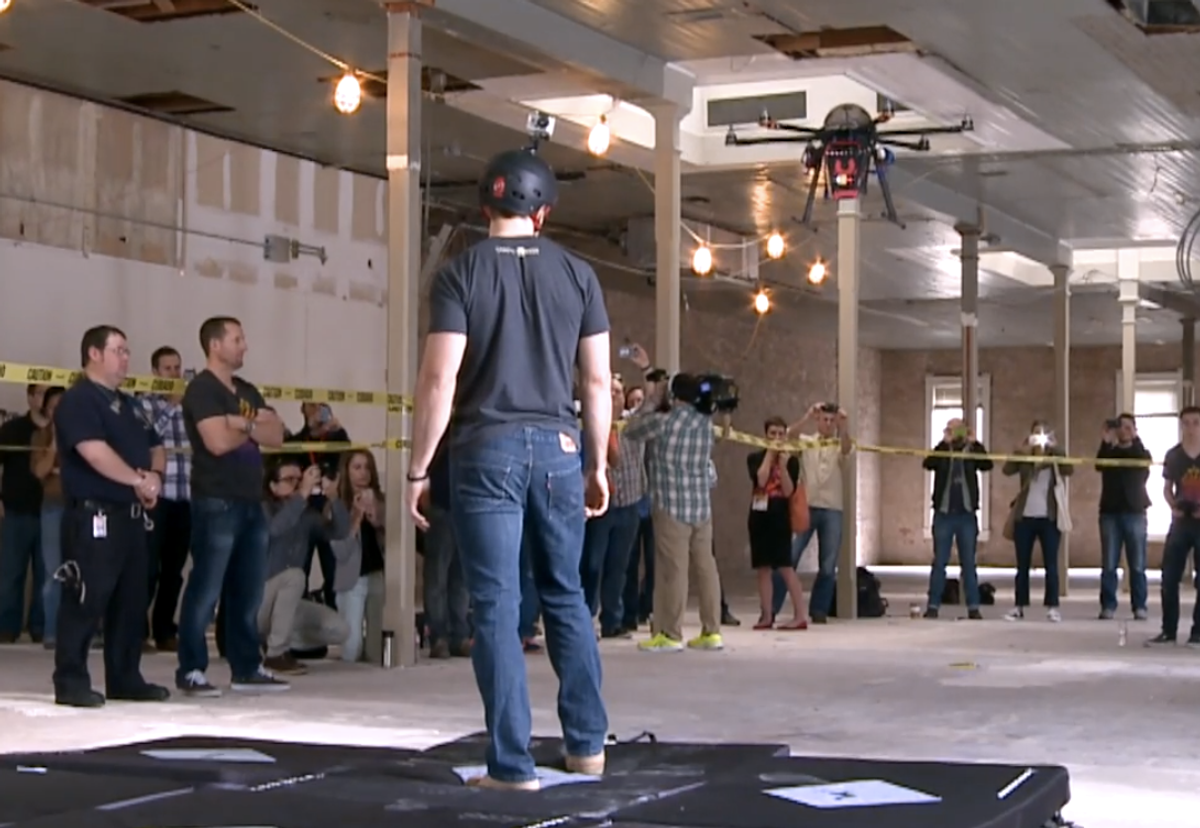 Today at SXSW, the company Chaotic Moon demonstrated its latest product -- a drone equipped with a stun gun -- in a dramatic display of aerial voltage. In the video below we see the insect-like copter-drone, CUPID (Chaotic Unmanned Personal Intercept Drone), stun an intern with laser precision and 80,000 volts of electricity.

Though awareness of drone capability may be limited to controversial military use, or Jeff Bezo's pipe dream of delivery drones (mocked by Netflix), the startling revelations of this video are the very real, terrifying capabilities of drones.

That is Chaotic Moon CIO William “Whurley” Hurley's point. The drone will not be available for commercial sale and its demonstration of a "home intruder" situation was to open up a dialogue about the potential function of drone technology -- today. According to BetaBeat Hurley Said:

“The things we thought were science fiction aren’t anymore. This conversation isn’t just between innovators, entrepreneurs, legislators – we’re trying to bring the discussion beyond our peers in technology to the people this technology will affect.”

The drone can function on its own or be piloted remotely. In the above scenario, which was coordinated with military and local law enforcement for maximum safety, it was human controlled. In an actual home invasion the drone would detect the intruder, send a notification to your phone along with a video of what the drone detected. From there you can "authorize" the person or "detain," a euphemism for shoot them with 30,000 volts more than a typical police taser. That's not all, when "detain" is authorized CUPID fries all electronic gadgets in a five foot radius.

This is where the questions are raised. Are CUPID-like stun gun drones even legal? Would civilians use them? Or law enforcement? A year ago former New York City Mayor, Michael Bloomberg, seemed to think that law enforcement's use of surveillance drones was inevitable. He probably didn't have CUPID in mind. This kind of technology could be, as BetaBeat put it, "abused."

Hurley also seems aware of this fact. “Usually when we finish a project with Chaotic Moon, we’ll open source the project for everyone’s use," he told BetaBeat. "Now we’re going to kill it.”