Fox News has an "Angry Grandpa" freakout: Obama is making them irrelevant 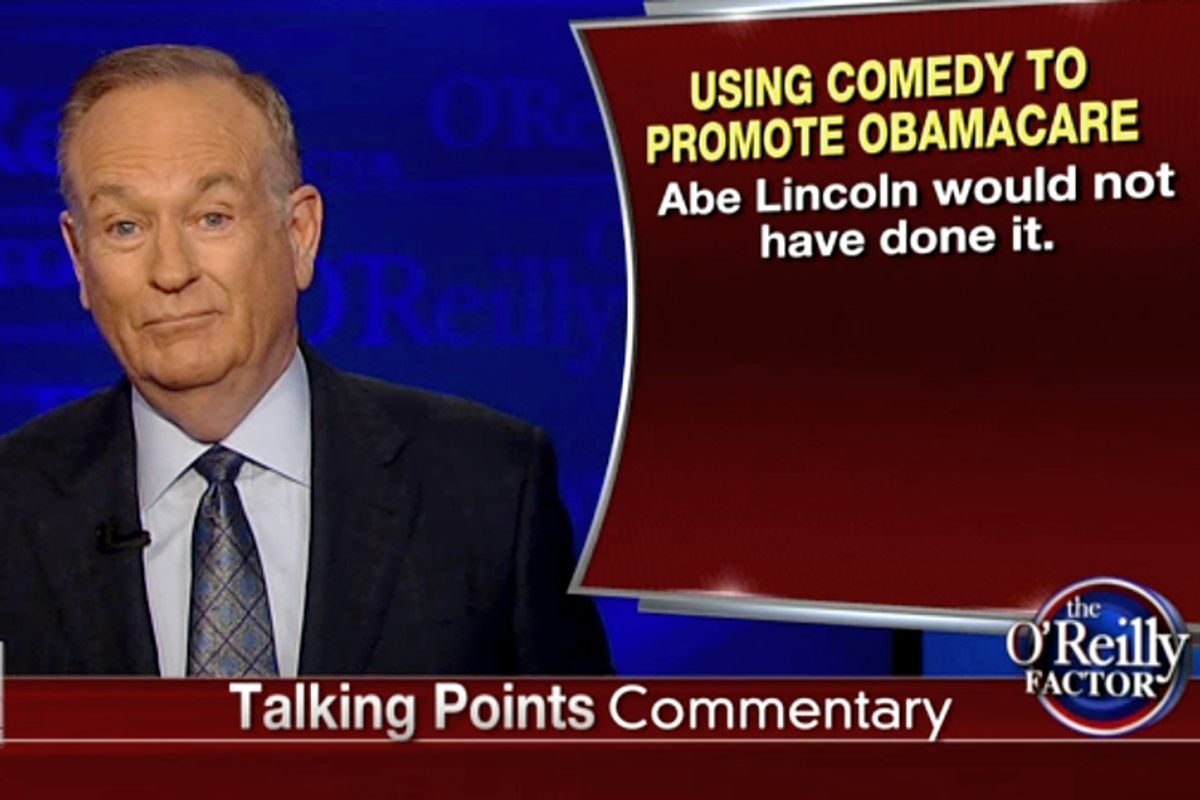 It’s easy to poke fun at Bill O’Reilly’s freakout over President Obama sitting down with Zach Galifianakis on his satirical Web series “Between Two Ferns.” On one level, it’s a typical case of Angry Grandpa just not getting it – Did he really say “Abe Lincoln would not have done it”? Why, yes he did – but it’s more than that. It’s a case of an entire political demographic panicking over how irrelevant they’re becoming, and how Obama is hastening their passing. To be honest, some in the mainstream media had a comparable reaction to O’Reilly’s – without O’Reilly’s surreal Abe Lincoln reference and right-wing angst. CNN pundit and bipartisan presidential fixer David Gergen brought O’Reilly’s point into the 20thcentury, tweeting:

But even ABC News’ Jim Avila, unbelievably, badgered Jay Carney at his Tuesday briefing about whether Obama had “damaged” the presidency by appearing with the “Hangover” star (and deadpanning mean jokes about the flop that was “The Hangover III”). "How much discussion was there in the White House about the dignity of the office and whether or not, in order to reach these people who don't watch us at 6:30, or who don't watch this briefing," Avila asked Carney. He went on to wonder "how much the dignity of the office might be lost? This is an interview like no other probably ever done by a president." Beyond the fuddy-duddy concern about the “dignity” of the presidency, traditional media folks are defending their own turf. They know this president, and increasingly other politicians, are learning how to move out beyond the networks and the Sunday shows, to reach a demographic the networks can’t reach: younger people.

The great part about it is, this president knows how to reach young people in a way that no other president has, and it’s very important that he reach young people with this issue. This is so much better and will attract so much more attention than him going on a Sunday morning show and talking about this issue when most people I know of this generation aren’t even up that early on a Sunday morning.

Making Aukerman’s point (and Obama’s): Funnyordie.com was the largest referrer to Healthcare.gov on Tuesday. Within two hours, 320,000 people had viewed the video and 19,000 had gone to the ACA website.   On the Fox side, though, the traditional media’s anxiety is a full-blown panic. In a meeting I once heard Roger Ailes brag that his audience consisted of “the 55-to-dead” demographic, and while I believe in some sort of afterlife, I don’t think the dead are watching Fox News (no, I don’t believe in hell).  So the Fox freakout is both institutional, representing the interests of the network pitched to seniors, and ideological: This is how that unqualified huckster in the White House is building a coalition that could lock up the White House, anyway, for the rest of their lifetimes. How dare he!

Media Matters tracked how the right, and particularly the folks at Fox, went apoplectic over Obama’s sit down with Galafianakis.

They should be alarmed. This is an approach that’s taking off among progressives. My friends at LadyPartsJustice are using hilarious videos to spoof right wing attacks on women’s rights, particularly reproductive rights. "It's the Law," on ugly anti-choice attacks, including the beloved transvaginal ultrasound, got over 655,000 views on YouTube with only viral grass-roots play, says co-founder Lizz Winstead. Sarah Silverman's visit with Jesus, during which the two watched TV and talked women's rights, has over a million YouTube views in six weeks. Elon James White and the team at "This Week in Blackness" use video and radio humor to subvert the media's white-centric conversation on race.

We have Galifianakis, Silverman, Winstead and White. They have O'Reilly. No wonder they're scared.