Owning my mixed-race identity: Why I don't have to choose sides

People can't seem to understand that I'm not either black or Anglo-Pakistani, but all of the above 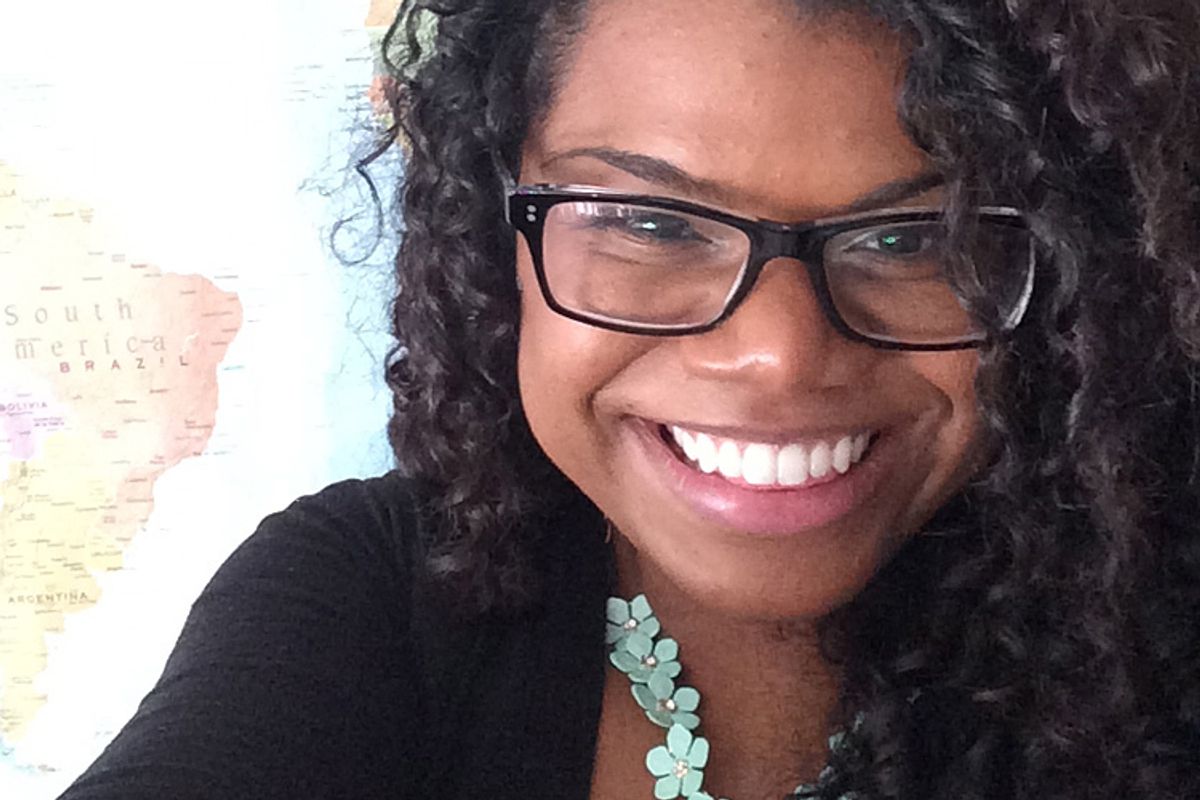 My mother is Anglo-Pakistani and my father is Jamaican (and a quarter Chinese). I grew up with my mother and her family, a chubby, curly-haired, dark-skinned child eating chana masala, aloo paneer and chicken makhani.  As a child, I didn’t know I was any different from the rest of my family. But as I grew up, I realized that I was different, because I looked different.

My mom is fair-skinned with pin-straight hair. My uncle and several other members of my family are also fair with clear, light green eyes. I did not get any of those traits -- I'm the darkest-skinned person in my immediate family, and the only one who's mixed-race. As a child, I envied my mother’s skin; I longed to be white. She didn’t have to feel uncomfortable in the spaces white people inhabited. She wasn’t sneered at, followed around department stores by an employee as if she was a thief, or pushed off the sidewalk when she was walking to school by white kids. Life seemed easy for her.

I despised my father; his absence humiliated me. Not only did I loathe his withdrawn parenting, but I hated his genes. I inherited his dark skin and large nose. All six of his kids did. They were markers of my presumed inferiority, giving people a reason to treat me unkindly, giving boys a reason to rate me a “4” for my “monkey face” while my other female classmates received a generous “9.” It also didn’t matter that I was my mother’s child; nowhere did people recognize me in her.

By the time I was a teenager, it became normal for waiters and sales clerks to ask my mother and I if we wanted separate bills for our meals and separate bags for our purchases. I usually just declined, but my mother would get frustrated. “She’s my daughter,” she’d say impatiently. “Oh, but you look nothing alike!” was the answer we’d always hear, and that was the end of that. I felt like I was adopted.

I felt most distanced from my fair-skinned mother in public settings, and I was embarrassed and angry, at the same time, that my skin color caused people to question our relationship. The powerful bond a daughter has with her mother made this questioning especially upsetting. I didn’t have a father, so being considered nothing more than a non-significant friend of my own mother was quite traumatizing.

The feeling was intensified when my cousin, and even my own ex-boyfriend (both lighter than I), came out with my mother and me for dinner. The waitress mistook them for her children, having a conversation with the three of them while turning her back to me. My mother stepped in to point out her real child.  “That’s your daughter? But there’s no resemblance!” the waitress said apologetically. But what she meant was that there were no convenient skin color resemblances to immediately identify us as family; my mother, in her eyes, was white. To her, I was black. And that meant we weren’t related.

I realized that inheritance is attributed with likeness; to belong to your family, you must look alike. Not alike in the eye shape, frown lines or smile, but alike in skin color. In our society, skin pigmentation is the greatest marker that sets us apart from one another. When a child looks different from her family members due to that pigmentation, her inheritance is questioned. As feminist author Sara Ahmed explains in her book "Queer Phenomenology: Orientations, Objects, Others," she becomes the “Black Sheep” of the family; she becomes the outcast, constantly having to explain her lack of familial resemblance to others.

Quite appallingly, I’ve heard parents try to justify their child’s familial difference. “She got that black nose from her father’s side!” or “I guess that little bit of Asian in the genes came out,” or even, “It must be the way the DNA was mixed.” An Anglo-West Indian friend of mine has two infants who, like me, are fathered by a Jamaican man. While they both have light eyes and beautiful hair, their grandfather explicitly favors the lighter-skinned child, because she looks so much like their mother (his daughter) did as a baby. When their mother was a child, she was also her father's favorite, chosen over her darker sister.

Now that I am in university and on my own, I face a more complex issue of mixed skin color. Ever since I have moved to London, Ontario, a predominantly white city, people identify me as “black.” To challenge them, I ask them why they think so. Their answer is usually that they can’t think of any other race I could be. When I ask them what kind of black they think I am, they can only come up with Jamaican, Guyanese or African. When I push them further, they can’t think of “any more black countries.”

The issue of looking “black” only comes up when I challenge it. Pakistani people I encounter frequently deny that I share in their culture. “No, you’re not,” they affirm, as if my mother greatly offended them by having a baby with a Jamaican man. Others are intrigued. They are at a loss for words when I tell them my mother is Anglo-Pakistani and fly out of their seats when I show them her picture.  However, when I tell people, especially white people, that my great-grandfather was full Irish, they brush off the fact entirely, perhaps because they think second-generation grandparents are irrelevant, or because I’m too dark to even comprehend having such a white grandfather. They also inquire about my existence, asking, “How did that happen?” as if it really wasn’t supposed to.

Whether I tell people that I’m mixed with Portuguese, Irish, Jamaican, Pakistani, Indian, Chinese, purple, blue, or red, black is all they choose to hear, and it comes to define me, creates others' scripts for how to deal with me, know me, speak around me, identify with me.

When trying to identify me or tell a story, even my friends refer to me as the “black girl,” though they know I am mixed. Men have wanted to date me because they have “never dated a black girl before.” I've tried to dismiss this political incorrectness, but it really bothered me. Why do I have to be one or another? Is it because it is convenient? Is it easier for people to categorize? Or is the failure to acknowledge mixed-race people as such deeply embedded in history?

For centuries, Canada and the U.S. have been wary of interracial relationships, and especially anxious about mixed-race children. From the colonial settlement years of the 1600s through the 20th century, mixed-race children represented a fear of contaminated blood, a threat to white purity.

By the 1620s European women were sent to the colonies to restore white “morality,” racial purity and European family life. Essentially, their main job was to wean European men away from sexual liaisons with women of color (the colonized), which often resulted in mixed-race children. Once the European women were situated, the interracial dynamics shifted; the children produced in these liaisons presented a concern for the government, who debated whether to extend citizenship and privileges to mixed-heritage children.

As interracial relationships became more taboo and criminalized, many mixed-race children were abandoned by their fathers, who went on to have “appropriate” family lives with the settled European women. Subsequently, when their shunned mothers could not afford to care for them or were taken by the government or biological father, these children might be abandoned altogether.

This fear of mixed-race individuals is not personal, but a matter of leftover anxiety over the blending of racial blood. For many years, different races of people have been trying to separate and distinguish themselves from one another as a means of cultural and racial preservation. Especially in the painful divide between whites and blacks, any child mixed with black (even if it’s a small percentage) has never be considered “white.” This is known as the “one-drop rule."  (The "rule" extends to other races as well.) The very existence of biracial children continues to be viewed by many as “tainting” whiteness with black blood, as we have seen in the angry response to the interracial Cheerios commercial.

It also comes back to inheritance. The side we resemble most is the side we are forced to take. If we are light, yet have ethnic features, we are black. If we are dark but look like our white mother, we are black. In my case, because my mother is Anglo-Pakistani and my father is black, I am black, even though my mother looks white. I am black because I don’t have traditional “Pakistani” features. I am black because my father is black.

This is not about denying any side of us; it’s about learning to accept and understand all oppositions and violences within our own histories that have kept races of people apart and that have kept us stuck in racially and socially constructed categories that have serious historical and present-day implications. Mixed-race awareness is essentially about that: mixed race. Calling myself mixed does not mean that I accept one race and deny another. What it means, as Gloria Anzaldua explains in her essay "La Conciencia de la Mestiza: Towards a New Consciousness," is accepting both with an open, welcoming mind, and understanding the contradictions that many mixed race individuals embody.  It is about learning that not only are mixed race individuals the future, but that we are evidence that society is accepting, at least in some ways, the blending of racial lines. It is about realizing that only when society learns to embrace multiple identities, including mixed ones, will we be able to move forward.

Eternity E. Martis is a fourth-year student living in London, Ontario. She is currently working on her full-length memoir. You can follow her @iratemixedchick.