GOP's sleazy pickup artists: Why their lame lines will never work on women

The right thinks it has a new way to woo female voters. Unfortunately for them, women aren't as dumb as they think 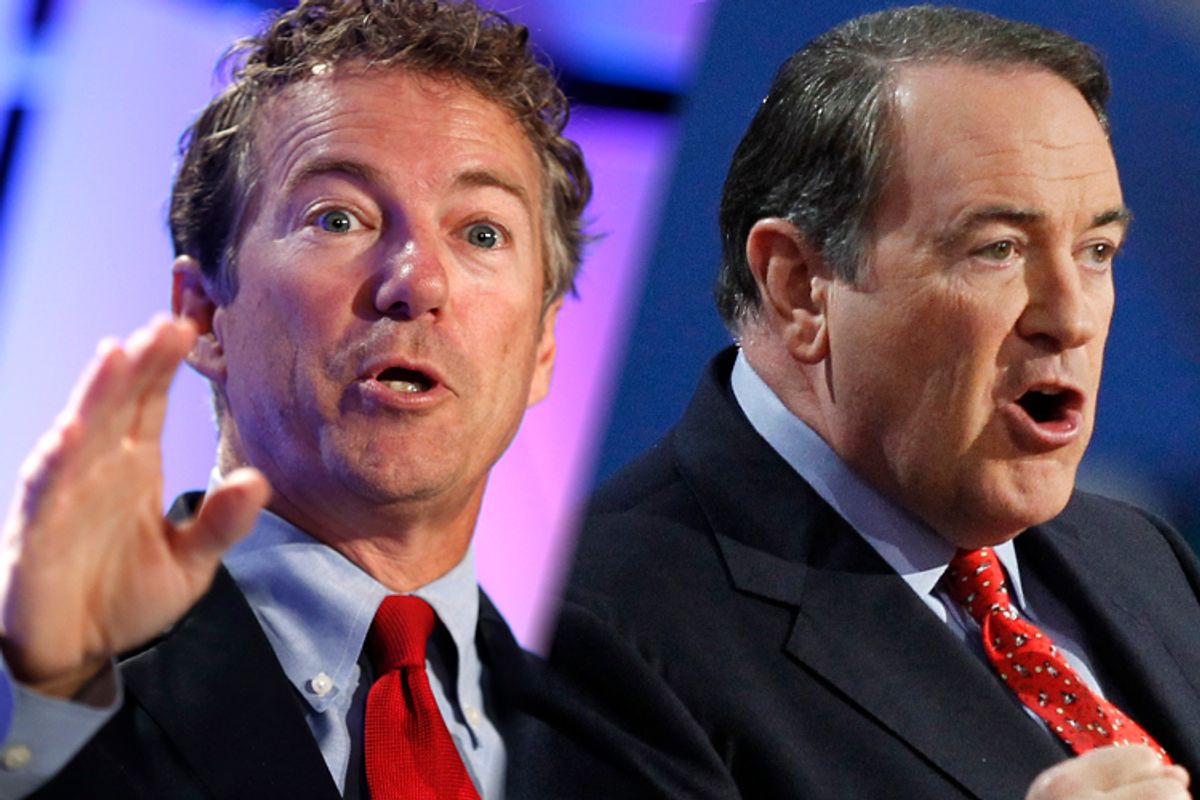 Lots of Republicans have lots of feelings about the party's problems with women.

This week, Mike Huckabee argued that dealing with women requires treating them like "special treasures" (who, presumably, he trusts can control their libidos). And Rand Paul has surprisingly little to say about how few conservative women currently hold political office, but seems very impressed by a strong showing from female veterinarians who hang around with his niece. Lesser names in the party have tried to connect with women by calling them "vaginas" or "hosts" for fetuses.

But savvier conservative strategists have tackled the question more thoughtfully, framing the problem as one of "optics" and "messaging" getting in the way. Stop the flood of casual misogyny and bizarre paternalism, the argument goes, and the votes will fall into place.

And the GOP has tried. In its meager effort to shift the party's brand and appeal to a broader (read: not white) base of women voters, they have appointed Republican women to tell the country precisely the same things that Republican men have been saying for years. In recent months that has meant explaining that the GOP believes it is sound policy to force people to buy expensive "abortion riders" in case they get raped, to attempt to cut food assistance programs by an obscene $40 billion at a time of record need and to tell workers that they shouldn't be able to access birth control -- that they already pay for -- because it might hurt their boss's feelings.

These "optics" were also the subject of the CPAC panel, "Why Conservatism is Right for Women" -- the only panel at the conference to feature all women. (Women only accounted for 21 percent of the speakers at CPAC this year.)

As much disdain as the panelists had for Democrats, they also -- unlike many of the men in their party -- seemed to agree that the GOP didn't "get it" when it came to women. But the problems facing the party, they argued again, were about the messengers -- not the message.

In order to reach women voters beyond the narrow pool of older married white women that the party has a slim lock on, the panelists advised Republican men to stop saying "stupid" (read: violently misogynistic) things and help women voters see that the "conservative ideal" is all about empowering women. “We cannot have any stupid comments this year. OK? No stupid comments,” Obenshain told the audience.

This is, of course, total garbage. Politicians who believe there is something called "legitimate rape" or that an angry God should punish the United States over legal abortion may fall faster and harder than those who keep their misogyny buttoned up in legislation, but they are each pushing the same narrow and alienating agenda that has doomed their party in the face of sweeping demographic shifts.

And the GOP's small step toward letting women do the talking when it comes to the rollback of reproductive rights, voting rights or the gutting of social services -- a strategy which has been loosely and unevenly applied several times over the last year -- has done little to persuade most women to support these policies.

Earlier this year, the GOP tapped Washington state Rep. Cathy McMorris Rogers to deliver a rebuttal to the State of the Union, where, in addition to explaining that "the true state of the union lies in your heart," also told Americans that the real problem right now isn't rampant and worsening inequality but an "opportunity gap." In October of last year, Tennessee Rep. Marsha Blackburn told Americans without health insurance that she wants them to stay that way because, apparently, dying of a treatable disease or losing your home over unpaid medical bills is the same thing as being able to choose disposable cups over champagne flutes. Sure, the optics may be slightly different, but the acoustics are still profoundly messed up.

As I've argued before, the GOP's problem isn't just its messengers, though they certainly don't help. The real issue is about its policies. The "war on women" may fail to capture the depth, range and targets of the battles Republicans have launched on all but a narrow segment of people living in the United States, but it's not, as the panelists suggested, a "meme." It's a policy platform with profound consequences. To act as though women don't already understand that is insulting -- even when it's coming from other women.

To be fair, the panelists are undoubtedly sincere in their efforts and had plenty of sound advice about how to make the GOP a (slightly) more inclusive party. They advocated investing more in female candidates, toning down the rhetoric that shames single mothers and women who choose not to have children and, again, encouraged men to stop saying terrible things about rape.

These are all fine things to do, and I hope the party leadership will listen, because conservative women deserve to feel represented and respected in their own party. Beyond that, the GOP would probably be well served to read Wright's postgame on the conference, or listen to Obenshain when she tells them that, "White men stay behind, let the women get out there and talk about these issues."

But if and when those white men step back, the women who step to the front will still be selling the same out of touch policies. They may not call college students who use birth control "sluts," but they will fight to deny them access to affordable contraception. They may not use made-up stories to argue that that low-income parents are unloving, but they will still fight to slash programs that help hungry kids eat.

And this, more than any kind of optics, is why they will continue to lose with women.