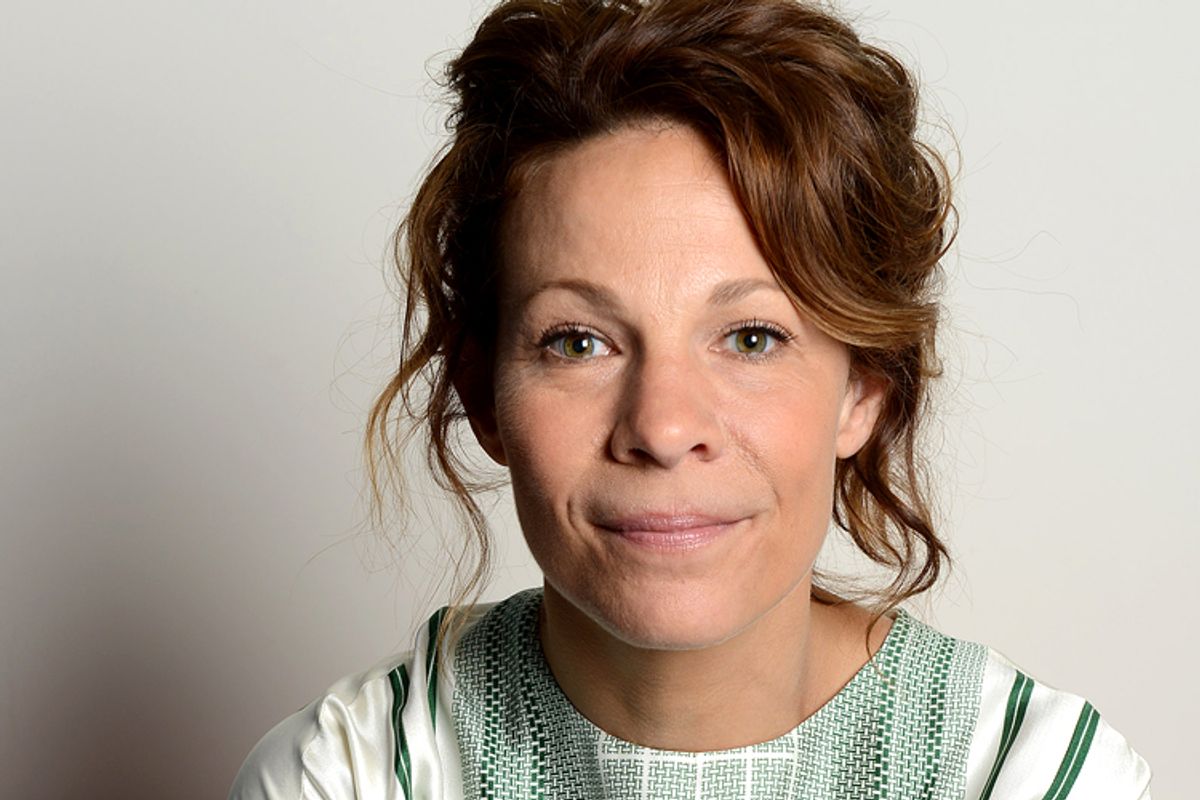 What is perhaps most distinctive about Lili Taylor, other than the offbeat characters she often plays, is the wonderful cadence of her voice. Her manner of speech is deliberate; she has these pauses in her sentences that practically force listeners to hang on her every word. Taylor seems to be thinking and speaking at the same time. Her rhythmic, husky tones suggest the intelligence and integrity of the characters she creates as much as they reveal her approach to playing them.

In "The Cold Lands," written and directed by Tom Gilroy (his previous feature "Spring Forward" was one of the best films few people saw), Taylor plays Nicole, a single mother in the Catskills who homeschools her son Atticus (Silas Yelich). Nicole is a well-meaning mom: she disdains TV, cupcakes and violent videogames, preferring “pioneer nights” with her son, where they might play Scrabble by candlelight.

Nicole has a close bond with Atticus, and it is palpable. She teaches him to be self-sufficient, something viewers can infer Nicole has been most of her life. Her lessons are useful. When Nicole dies suddenly, Atticus opts to eke out life on his own rather than be taken to a foster home by authorities. He hides in the woods and ultimately befriends Carter (Peter Scanavino), who takes him under his wing.

Taylor is on-screen for about a third of "The Cold Lands," but her presence is felt throughout. The beauty of this small, compelling film is that the characters, like Nicole, are so realistic, so lived-in, they resonate even when they are not on-screen.

Salon spoke to Taylor about her work on the film, and why she plays characters who get under the viewer’s skin.

You knew Tom Gilroy from working in theater with him. Did he write Nicole with you in mind?

I think if there’s a woman around my age, he usually thinks of me. I don’t think he wrote Nicole with me in mind, but he wanted me to play her. The character is loosely based on someone Tom knew.

Nicole recycles, composts and homeschools her son. It seems like a tailor-made role for you. What appealed to you about playing Nicole? Could you live off the grid?

No. I couldn’t. I love nature but I like society, too. I think any extremes are extreme, and there’s something good about being in the middle.

How did you create Nicole’s backstory — she moves to the Catskills, and eking out the life as a single mother?

Tom and I have been friends for 20 years and have a great working relationship. We’ve been talking about "The Cold Lands" for a year. By the time I got there, we laid a foundation on how we imagined Nicole and how she lives. It’s really about imagining stuff. I don’t know anyone like her, nor do I live like that, but I can imagine her and why she is the way she is. I think she’s complicated. I don’t agree with all of her ways — for instance, medicine. Her philosophies almost got the best of her. If she was open to Western medicine she could have been around a lot longer. I don’t have to agree with my characters but I need to empathize with them, I need to understand them.

Let’s explore that. Nicole is proud and stubborn. I like how she teaches her son to be self-sufficient almost by example. But she’s also hiding something important from him. That’s an interesting wrinkle. Is it part of your process of “finding” a character to explore how they might respond to a situation, especially if it is not how you would?

What you hit on with her flaws — I feel the same way. With human beings, perfection doesn’t exist. It’s important for me to expose the parts of the character that are uncomfortable, unevolved, and reactionary — the shadow aspects. But also the strengths, her self-reliance, her imparting her curiosity to her child — that’s huge, a beautiful gift. Getting her strengths to stand next to her weaknesses — that made me interested in her. Especially as a parent. Every day there are huge mistakes. My child — nothing makes her light up more than when I tell her the mistakes I made. Her smile is ear to ear. It’s comforting. Why do we have to hide it?

Nicole’s relationship with Atticus is close, but it never feels forced; she exasperates him when they choose a birthday gift but he really does adore her. How did you bond with Silas, the actor who plays your character’s son? Did you have pioneer nights, and play Scrabble? Are you a good Scrabble player, by the way?

I don’t know if I’m a good Scrabble player. I’m curious about Words with Friends. So much of acting is adapting and seeing what you have and working with what you have and not imposing on the character or the other actor. Tom worked with Silas for a year, and was telling me who he was and about his growth and development. [Connecting with] a boy of that age is coming through the back door and being honest with him, but not letting him know exactly how you are trying to get in. We found a way in through animals and sports. I like sports too, so it’s being authentic, but finding a common ground with the authenticity.

What do you think of how Atticus responds to the death of his mother?

I liked it. It was really realistic. In all the kids Tom talked to about the death of parents, none cried on their own; they only cried in the presence of adults because they felt they had to. They don’t know how to process it. You can’t comprehend it in a way.

What do you think of the character of Carter in the film? Is he an appropriate father figure?

I think he works for Atticus. That’s one thing that’s important — finding someone the kid can respond to. Carter’s means are questionable, but the ends are great.

My favorite scene in the film is when Nicole gifts her son the slides she finds by the side of the road and she and Atticus make up stories together about the people in the photos. Was this scene improvised? It felt like it might have been.

No, Tom had written that. One nice thing about doing an indie is that there’s such a comfortable niche. The crew feels like family and you feel like you’re [shooting] in your living room, so the artifice is not there. A lot of the work’s been done.

You were a bit of an indie darling for a while — my favorite role of yours is in "Starting Out in the Evening." You have also made a few Hollywood films ("Haunting," "The Conjuring") and developed a body of work in television ("Almost Human," "Hemlock Grove," "Six Feet Under"). You also have a theater performance coming up (The Library at the Public Theater, March 25-April 27). Can you discuss your approach to your career?

I love working and what I do. I love collaborating. Thank goodness that the lines between mediums have blurred. In the ’90s it could hurt you to do TV. In some ways it’s like the English way of working — bouncing between all three [film, TV, stage]. It keeps a lot of doors open, and you get to flex muscles, especially between theater and film. “No contempt prior to investigation” is a saying I try to live by. I try to stay open.

I love your voice and your cadence. You have a scene where Nicole calls her son Atticus and it almost sounds like “Add a Kiss.” What can you say about the rhythm of language and how you develop your characters’ speech patterns and inflections?

It’s interesting. I have funny hang-ups about my voice. I was told it wasn’t trainable. The conservatory wasn’t going to let me in because of my voice. I don’t think a lot about it. I really appreciate you saying this. There is something at work there. I can just trust what’s at work. I imagine it’s about getting to know the character, which is not easy, and hopefully that character has as much room as possible to come through. I guess my job is done if you’re hearing different cadences from character to character, so her voice is getting through.

There’s a line in the film that Atticus has that his mom says, “Everyone wants to be happy.” What makes you happy?

Gratitude is one thing. It’s something I don’t have and feel enough, but when I experience it I feel connected to everything and feel happy and alive. But it’s finding ways to have more of that in my life.