From creationism to ESP: Why believers ignore science 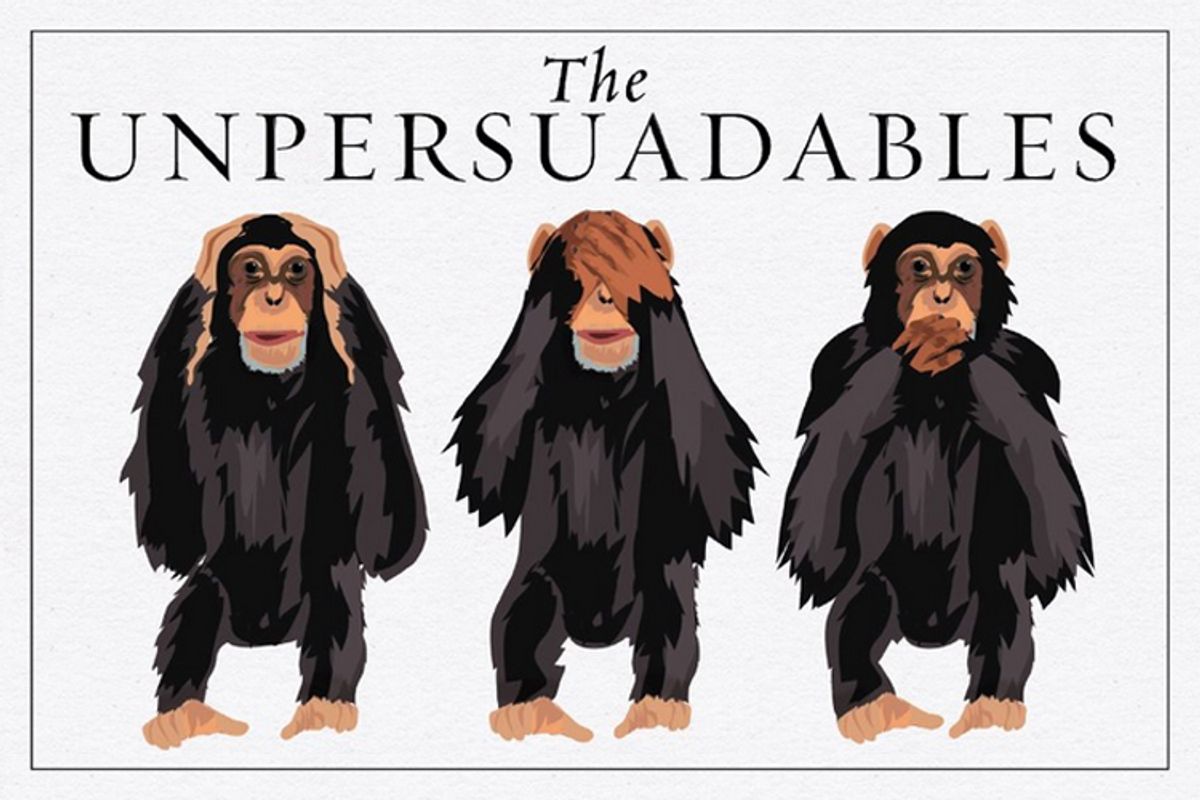 Will Storr knows exactly what sort of book you expect "The Unpersuadables: Adventures With the Enemies of Science" to be. He opens it with a gathering he covered in a small town in rural Australia, a place nicknamed after a species of tree with potentially lethal stingers. A couple of hundred people gathered there to hear John MacKay, a science teacher turned creationist, lay out evidence for his belief that the world was created by God, 7,000 years ago.

"I see the lines there," Storr thinks, looking down at his notepad, "ready to be filled with descriptions and strings of overheard dialog and the thoughts I'll think about these Christians, these crazy Christians; the words that will make up the story that will be read by people just like me. I see the lines, and I already know what they're going to say." None of it will answer the nagging question of why people believe the strange things they do.

And if Storr is sure of anything -- being sure emerges as a dubious quality in the course of "The Unpersuadables" -- it's that he's tired of how this story has been told. He doesn't believe in creationism, and sees no reason why he ever should, but after quizzing a few of the attendees about their understanding of the scientific substance of the creationist debate, he admits that his own pro-evolution position is just as faith-based as theirs. "Like so many people who hold strong opinions about it, I have never studied evolution. I have exercised no critical thinking on the topic whatsoever."

And so begins a searching, extraordinarily thoughtful exploration of what it means to believe anything -- not just the weird things that the fanatics, eccentrics and heretics that Storr interviews believe. These renegades lavish their conviction on everything from the fairly respectable (homeopathy) to the decidedly not (Holocaust denial) and their fixations range from from such classics as UFOs and ghosts to an obscure malady called Morgellons, whose sufferers believe that their skin has been infested by a mysterious agent that some think is a rare parasite and others are sure is a top-secret form of nanotechology run amok. Storr undergoes past-life regression and attends a huge convention of the followers of a superstar guru whose breathing exercises are said to cure cancer. ("It has been found that cancer cells cannot thrive in a highly oxygenated environment," a follower informs him.) He also rubs shoulders -- and butts heads -- with public figures from the thriving skeptic community.

"The Unpersuadables," like most books intended to make you think rather than to tell you all the ways you're right, is difficult to characterize. It contains a larger portion of autobiographical material than some readers will expect or welcome, but to my mind this background creates an illuminating context for Storr's perpetual self-questioning. In his youth, he rebelled against his parents' Catholicism and expectation that he'd go to college; he also suffered from periods of depression, kleptomania and obsessive, self-destructive jealousy. Now a novelist and journalist, Storr comes across as a man on even footing who never takes that evenness for granted. He also likes outsiders and dissenters, having spent the first part of his life adamantly refusing to fulfill his family's dreams for him.

Fortunately for Storr, he wanted to write and he's really good at it. Each chapter in "The Unpersuadables" plunges the author into a peculiar subculture, and each has its own narrative flavor. The account of a family who discovers that their late, estranged daughter and sister had fallen into the clutches of therapists convinced of the existence of networks of Satanic ritual child abusers, murderers and cannibals works like a detective story. Another on Lord Monckton, a famous British climate-change denier, is a profile in reactionary nostalgia as a way of life. The Morgellons chapter is, of course, a medical thriller, although the results are not vindicating when Storr finds a doctor willing to analyze some fibers for a sufferer. (Most medical professionals view even the request to have such lab work done as a symptom of a psychological disorder, but this particular physician had been afflicted with a rare parasite himself and sympathized.) And Storr tries -- very, very hard, in a chapter resembling a courtroom drama -- to get to the bottom of some troubling disputes surrounding the presiding saint of the skeptics movement, James Randi.

Running through all these stories is Storr's growing uncertainty about certainty. In the first chapter, he presents his readers with a conundrum: "I consider -- as everyone surely does -- that my opinions are the correct ones," yet to assume that he really is right about everything "would mean that I possess a superpower: a clarity of thought that is unique among human beings. Okay, fine. So accept that I am wrong about things -- I must be wrong about them." Yet when Storr surveys his own views, again, they all strike him as spot-on. "I know that I am not right about everything, and yet I am simultaneously convinced that I am. I believe these two things completely, and yet they are in catastrophic logical opposition to each other."

Such rumination undermines Storr's faith in his convictions, rooted as they once were in the rather quaint confidence that human beings make up their minds rationally. Instead, exploring recent developments in neuroscience, he learns that we believe first -- engaging mental models formed early in life and rarely amenable to change -- and come up with the reasons for it afterward. By the now-familiar process of confirmation bias, we ignore what doesn't support our most favored notions, and shine a brilliant spotlight on the ones that do. Our minds operate unconsciously to a flabbergasting degree, while our consciousness is forced to tag along after, cooking up convincing rationales. "We do not get to choose our most passionately held views, as if we are selecting melons in a supermarket," is Storr's provocative conclusion.

The two most memorable chapters in "The Unpersuadables" exemplify two ways of responding to the unreliability of even the most reliable mind. In the first, Ron Coleman, the founder of an advocacy group for people who hear voices, explains that the two he hears (his late wife and a priest who molested him when he was a boy) are really portions of his own self trying to communicate with him. He went off the psychiatric drugs that are, despite their crushing side effects, the inevitable official treatment for people who hear such voices and get labeled as schizophrenic. He strove instead to negotiate and live with them, and he created Hearing Voices Network to help others try this, too. The group and some supportive psychiatrists have argued that the voices are not a symptom of "some disease in their brain," but a reaction to early trauma, and that this is simply the way some brains respond to such emotional damage. But whatever the cause, Coleman sounds more humane and even more reasonable than the institutions that want to drug him into lethargy.

Most fascinating of all, however, is Storr's account of going on a tour of World War II sites with David Irving, a historian notorious for his position on the Holocaust. This is a somewhat unstable body of claims that has included Irving's insistence that fewer than 6 million Jews were murdered by the Nazis, that the concentration camps did not contain gas chambers and that whatever happened to the Jews was not Hitler's fault, anyway. (In an inversion of the old "just following orders" defense, Irving's Hitler was ill-served by scheming genocidal underlings.)

This narrative is a tour de force in which Storr tries to blend in with a group of men whose flagrant racism makes him want to gag. Meanwhile, he is ever seeking a sit-down with the surly, stand-offish Irving, who will barely speak civilly to any of them. This bizarre expedition is managed by Irving's assistant, a beautiful young blonde who takes care of him to the point of mending his trousers, but has no romantic interest in him. "He thinks he adores me," she tells Storr. Meanwhile, the men tour concentration camps where Irving triumphantly points to the handles on the inside of the doors to the "alleged" gas chambers, but he fails, Storr observes, to notice the bolts on the outside of the doors. All this culminates in a flabbergasting conversation in which Irving explains away Hitler's several unequivocally genocidal anti-Semitic remarks as mistranslations and "reading between the lines." "It's not between the line," Storr says in exasperation. "It's on the line." But Irving remains unmoved and unmovable, so eventually Storr flies back to the U.K. to marry a woman of Pakistani-English heritage. There are entire novels that do less than Storr achieves here in a mere 30 pages.

That Storr finds many self-professed skeptics to be just as knee-jerk in their opinions as any other flavor of fanatic is not surprising, but his dogged approach to nailing many of the most celebrated skeptics in lies and misrepresentations is welcome. That's not to say that Storr agrees with the other people he interviewed; in fact, he retains his disbelief in telepathy and UFOs despite liking many of the people who are convinced they exist. But the gleeful self-righteousness of some of the skeptics, their conviction that they are the only ones who aren't judging the world through a scrim of prejudice and wishful thinking, understandably irks him, as does their fondness for presenting themselves as heroes. "Christians or not, there will be tribalism," he writes. "Televangelists or no, there will be scoundrels. It is not religion or fake mystics that create these problems, it is being human." Criminality, intolerance and hatred should be stopped, but "where there is ordinary madness, we should celebrate. Eccentricity is our gift to one another. It is the riches of our species. To be mistaken is not a sin. Wrongness is a human right."