Sexual assault charges against Brig. Gen. Jeffrey Sinclair have been dropped as part of a deal 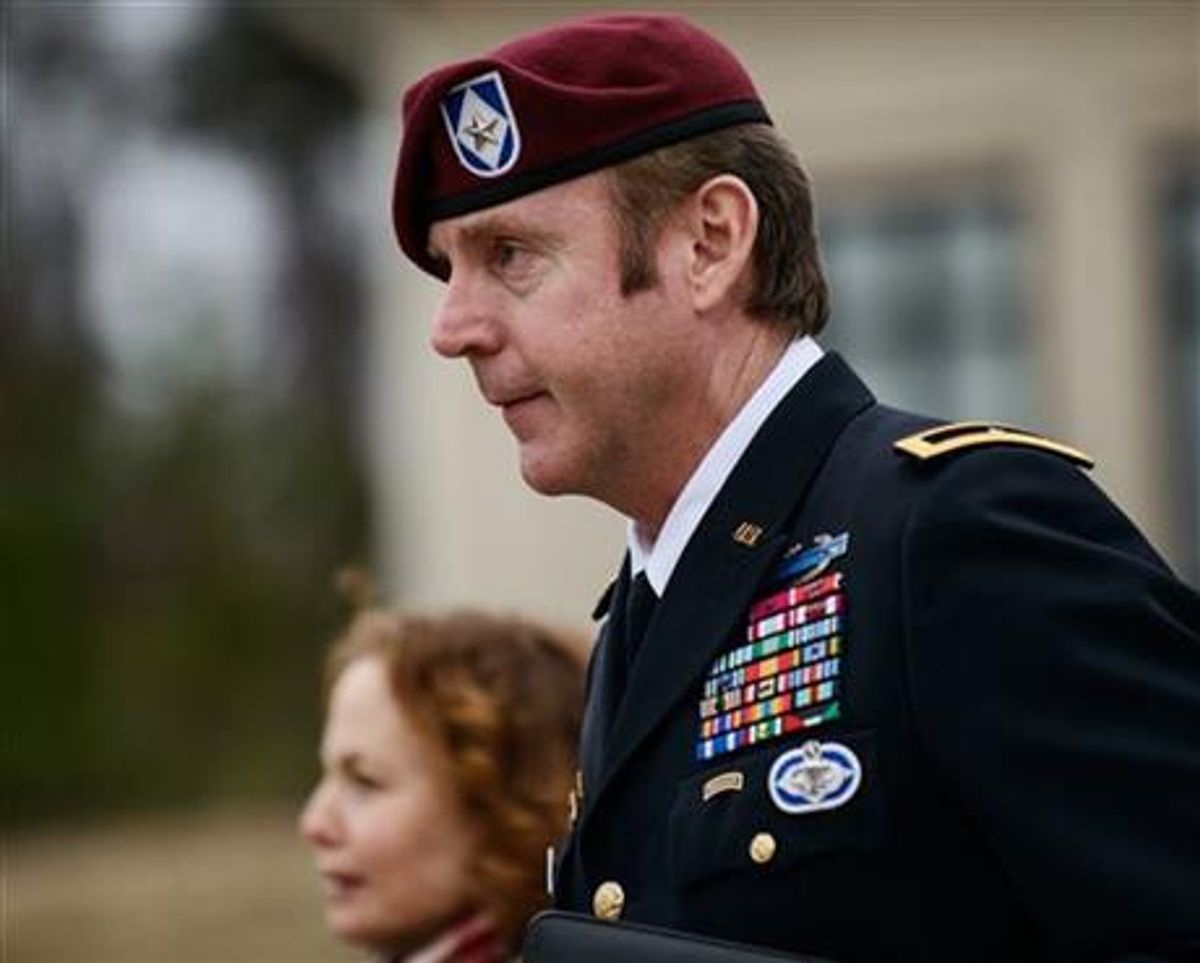 FORT BRAGG, N.C. (AP) — An Army general who admitted to multiple affairs with soldiers under his command was expected to plead guilty Monday to a host of charges while the most egregious — that he forced one woman to perform oral sex — was to be dropped as part of a deal.

The hearing at Fort Bragg is likely to cap the high-profile prosecution of Brig. Gen. Jeffrey Sinclair. It comes as the military continues to grapple with revelations of sex crimes in its ranks and political pressure to address the issue. A sentencing hearing for Sinclair — believed to be the highest-ranking U.S. military officer to face court-martial on sexual assault charges — could begin as soon as Monday.

Lawyers for Sinclair said he will plead to lesser charges in exchange for the dropping of the sexual assault charges and two other counts that might have required Sinclair to register as a sex offender.

Sinclair, 51, had been accused of twice forcing a female captain under his command to perform oral sex during a three-year extramarital affair. The Associated Press does not generally identify alleged victims of sexual assault.

The Army's case against Sinclair started to crumble as questions arose about whether the woman had lied in a pre-trial hearing. It was further thrown into jeopardy last week when Judge Col. James Pohl said the military may have improperly pressed ahead with the trial to send a message about its determination to curb rape and other widespread misconduct. Under the military code of justice, the decision was supposed to be decided solely on the evidence, not its broader political implications.

Ultimately, a judge will give Sinclair a sentence that can't exceed terms in the agreement struck between defense lawyers and military attorneys. The legal agreement is likely to require a punishment less severe than the maximum penalties of 15 years in prison and dismissal from the Army.

Sinclair may also face additional administrative penalties from the Army, which could force him to retire at reduced rank. That could cost Sinclair hundreds of thousands of dollars in pension benefits.

Retired Maj. Gen. Walt Huffman, a Texas Tech University law professor who previously served as the Army's top lawyer, said Sinclair could be busted back two ranks to lieutenant colonel since the affair at the heart of the case began before his most recent promotion.

Huffman said it's possible the judge could sentence Sinclair to a punishment lower than what's called for in the plea agreement.

"If the judge determines he was a good soldier who served his country well other than his inability to control his zipper, then the judge might cut him a break," Huffman said. "But either way, his career in the Army is going to be over."

Sinclair's new plea agreement was approved and signed over the weekend by a high-ranking general overseeing the case, according to a copy provided by the defense team.

The married 27-year Army veteran pleaded guilty earlier this month to having improper relationships with three subordinate officers, including the female captain who accused him of assault. He also pleaded guilty to adultery, which is a crime in the military.

Under the plea deal reached over the weekend, Sinclair will also admit abusing a government credit card he used while traveling to visit his mistress.

Defense attorney Richard Scheff said Sinclair is admitting to his mistakes, but added that the general is pleading guilty to behavior that likely wouldn't be criminal in the civilian world.

"After wasting millions of taxpayer dollars, the Army finally admitted what it's known for many months: General Sinclair is innocent of sexual assault," Scheff said. "Brigadier General Sinclair has admitted to mistakes that are normally a matter between husbands and wives, or employees and HR departments. It's time to put this matter to rest."

The former deputy commander of the 82nd Airborne Division, Sinclair is believed to be the highest-ranking U.S. military officer to ever face court martial on sexual assault charges.

A spokesman for Fort Bragg commander Maj. Gen. Clarence K.K. Chinn, who approved Sinclair's plea deal, could not be reached for comment Sunday.

According to the defense, a separate agreement reached with Chinn will dictate what punishments Sinclair will receive.

That part of the agreement will remain secret until after Pohl, as the judge overseeing the case, conducts the sentencing hearing. That process will include testimony from about 20 witnesses.

It was not immediately clear whether his primary accuser will be among those called to the stand. The Associated Press generally does not name those who say they were victims of sexual assault.

At the hearing, Pohl will sentence Sinclair based on the evidence presented before unsealing the plea deal. Sinclair will receive whichever is the lesser punishment — the judge's sentence or the negotiated pre-sentencing agreement with prosecutors.

Capt. Cassie L. Fowler, the military lawyer assigned to represent the accuser's interests, did not respond to a message seeking comment Sunday.

In a December letter, Fowler had argued to prosecutors that dismissing the sexual assault charges against Sinclair would not only harm her client, but would set back the military's broader fight to combat sexual assault.