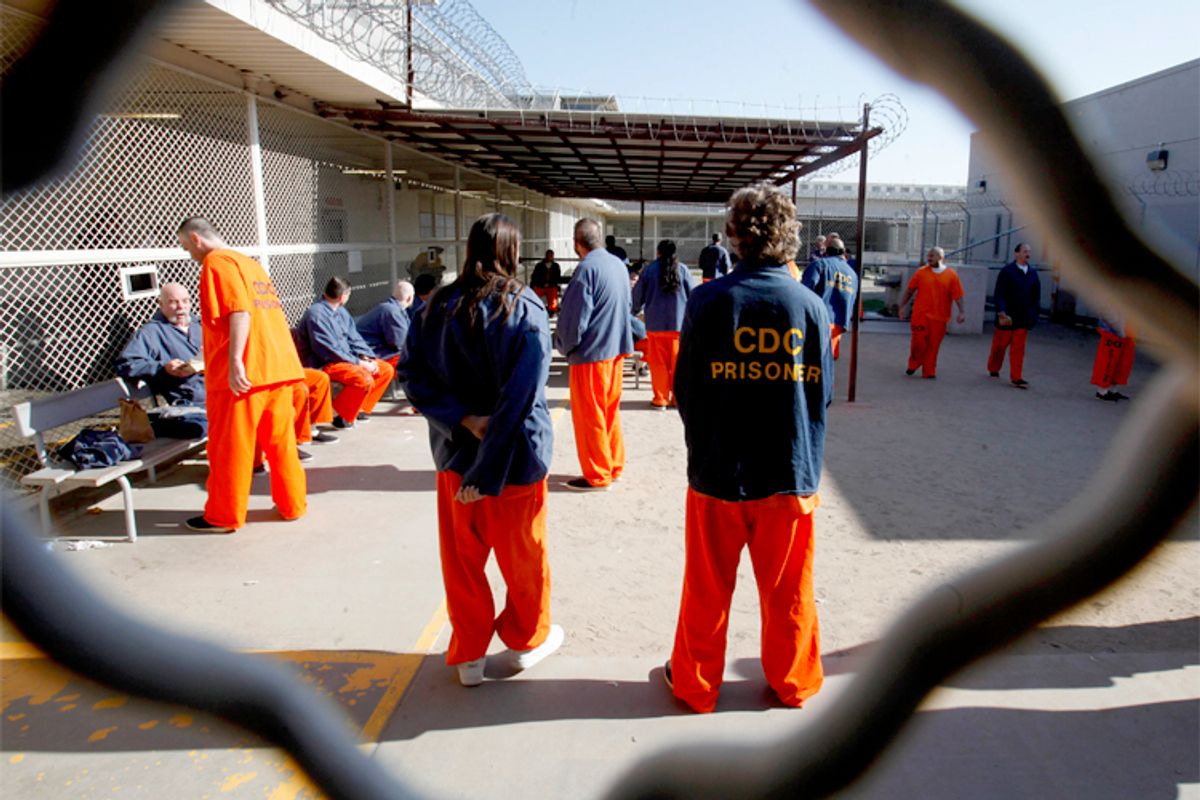 Recently, Human Rights Watch released its World Report evaluating each country’s human rights practices around the globe. The United States fared poorly in safeguarding the rights of its own population, with those hit hardest by abuse typically the most vulnerable in the society, including racial and ethnic groups, minorities, the poor, immigrants, prisoners and the elderly. Here are 10 key areas identified by HRW where the United States fell short in upholding and preserving human rights.

1. Harsh sentencing. The United States has the world’s largest incarcerated population in the world with 760 inmates per 100,000 residents and an estimated 2.2 million people behind bars. Our country holds about five percent of the world’s population, yet houses around 25 percentof its prisoners. Mass incarceration in the United States is the result of decades of punitive sentencing regimes, including life-without-parole sentences, high mandatory minimum sentences and three-strikes laws, with nearly half of current federal inmates serving time for drug-related crimes.

While Attorney General Eric Holder has urged for changes in federal sentencing guidelines to reserve the harshest penalties for the most serious drug traffickers, low-level and nonviolent drug offenders still remain subject to disproportionately long sentences and are often left with no choice but to accept plea bargains from prosecutors or face arbitrarily fixed minimum sentences.

While the number of death sentences in the United States per year has fallen, 32 states still impose the death penalty, despite the fact that its usage has been found to be contrary to international law. Last year alone, 42 people were executed and 10 people have been executed as of March this year.

Last year, 30,000 inmates of a California state prison went on a hunger strike to rally against inhumane conditions and the use of solitary confinement in jails. Still, prisoners continue to be held in the Special Housing Unit, or the SHU, often for weeks or months on end. Prolonged solitary confinement amounts to “cruel punishment or torture” under international law and is scientifically proven to cause serious mental and physical suffering.

3. Youth detention. In nearly all jurisdictions in the United States, youth offenders are tried in adult courts and sentenced to serve time in adult jails. It is estimated that more than 95,000 youths under 18 were held in adult prisons in 2011 where they are subject to solitary confinement. In 2012, the Supreme Court struck down mandatory life-without-parole sentencesfor juvenile offenders convicted of homicide, calling into question almost 85 percent of all juvenile cases in the country, according to HRW.

In a positive move, California enacted a law in September providing for the possibility of review for about 5,000 young people sentenced to life in prison. However, many states have yet to comply with recent Supreme Court decisions, which means life-without-parole sentences for youth homicide crimes are still executed. More alarming, HRW found that nearly every youth offender serving life-without-parole reported physical violence or sexual abuse by inmates or corrections officers.

4. Poverty and justice. The link between poverty and criminal justice remains apparent with the majority of poor defendants suffering in pretrial detention because they are simply too poor to post bail or pay the high court fees and surcharges. According to HRW, 60 percent of jail inmates are confined pending trial because they lack financial resources to secure release, which costs this country approximately $9 billion a year.

Furthermore, the law continues to unjustly punish economic hardship. The poor and homeless are routinely and unfairly harassed by police and arrested under laws that prohibit loitering, sitting and occupying public spaces. Those who cannot pay their rent in some states also face criminal prosecution. Not only are the poor “stigmatized, scapegoated and mistreated” by the criminal justice system but also inadequately legally represented in court by under-sourced, overworked public defenders, which ultimately impairs their right to a fair trial. In response, the Chief Judge of New York pledged within a year to implement legislative reforms that would reduce pretrial incarceration of indigent defendants.

5. Racial disparities in criminal justice. African Americans only account for 13 percent of the population, yet they make up 41 percent of state prisoners and 44 percent of federal prisoners serving time for drug offenses. They’re also arrested for drug offenses at four times the rate of whites and Latinos even though all have comparable rates of drug use. Racial and ethnic minorities, particularly those with criminal records, are also more likely than white people to experience stigma and legal discrimination in employment, education, housing and the right to vote.

Racial disparities are also evident among police routine stop-and-frisk practices. African Americans are three times as likely than white people to be searched during a traffic stop. The New York Civil Liberties Union found that more than 86 percent of those stopped and frisked by the police in New York City were black or Latino, even though 88 percent were innocent. In August, a federal court found that the stop and frisk policy of the New York City Police Department violated the rights of minorities, a decision Mayor de Blasio recently moved to uphold.

6. Labor rights. Millions of American workers suffer from weak or non-existent labor laws making them vulnerable to exploitation. Many find themselves subject to below-minimum wage or overtime violations, hazardous work conditions or discrimination based on age, disability or family responsibilities. Those paid below minimum wage have been met with hostility and subject to retaliation by their employers for speaking out for higher wages. In a small victory last year, home care workers who provide essential services to the elderly and people with disabilities won the right to minimum fair wage.

Far less talked about is the fact that Congress has still not closed legal gaps allowing children to engage in hazardous work in agriculture starting at age 16, despite such work being prohibited in all other jobs until age 18. In the meantime, hundreds of thousands of children working on American farms—many Latino—risk pesticide poisoning, heat illness, life-long disabilities and death. HRW reports that 75 percent of children under 16 who suffered fatal occupational injuries worked in crop production.

7. Health policy. Despite Obama’s efforts to implement a national health plan to expand access to health insurance to all citizens, Republicans in 21 states have refused to expand Medicaid services for low-income residents under the Affordable Care Act. This has directly impeded the right to health for the poor and those vulnerable groups with limited access to medical care.

8. Women’s rights. In 2013, Republicans in 22 states enacted 70 different restrictions on access to abortion, which was a major blow to women’s reproductive health rights across the United States. These restrictions took a variety of forms, including requiring abortion providers have admitting privileges at local hospitals, patients undergo pre-abortion ultrasounds, abortion bans after 20 weeks or pregnancy and limiting insurance coverage. This surge in restrictions led to the closure of clinics, threatening others and has made it increasingly difficult to obtain abortion in many regions for women.

In addition, sexual violence against women and inadequate investigations into rapes remains particularly disconcerting. Only 30 percent of rape survivors report incidents of sexual assault to police in the United States, but even reported cases are not adequately investigated. Last week, it came to light that there are 400,000 unprocessed rape-kits in the United States that have sat in storage for years without being tested, leaving many to wonder whether rape really is a crime without consequences in the U.S.

9. National security and surveillance. The NSA surveillance program came under harsh criticism last year for violating fundamental civil and political rights including the right to privacy after whistleblower Edward Snowden leaked confidential documents showing that the United States and other countries had engaged in global data interception techniques.

Counterterrorism policies also remain questionable with the United States holding at least 154 detainees indefinitely without charge at Guantanamo Bay as the facility enters its 12th year of operation. Adding fuel to the fire, a U.S. federal court refused to stop the practice of force-feeding detainees last week, a practice that violates fundamental medical ethics and constitutes ill treatment.

Finally, the shroud of secrecy surrounding Obama’s targeted killings abroad without providing any legal justification remains a key concern, particularly the lack of accountability relating to drone policy and strike attacks that have been found to be in breach of international humanitarian law.

10. Rights of non-citizens. There are approximately 25 million non-citizens in the United States with at least 10 million in the country without legal authorization. Up to 400,000 non-citizens are held in over 250 immigration detention facilities across the country despite many having no criminal history and strong ties to the United States such as a family member. In 2013, the U.S. Immigration and Customs Enforcement deported almost 370,000 non-citizens, with illegal reentry the most prosecuted federal crime. HRW documented a high number of detainees subject to chaotic and frequent transfers between facilities hampering their access to due process and intensifying general distrust of authority in immigrant communities.

Republicans across the United States continue to reject immigration law reform and are fighting hard against immigration polices that impact on the rights of unauthorized immigrants including the Deferred Action for Childhood Arrivals. DACA suspends deportations of those brought to the United States as children who are over 30 years of age and have lived in the country for five years.