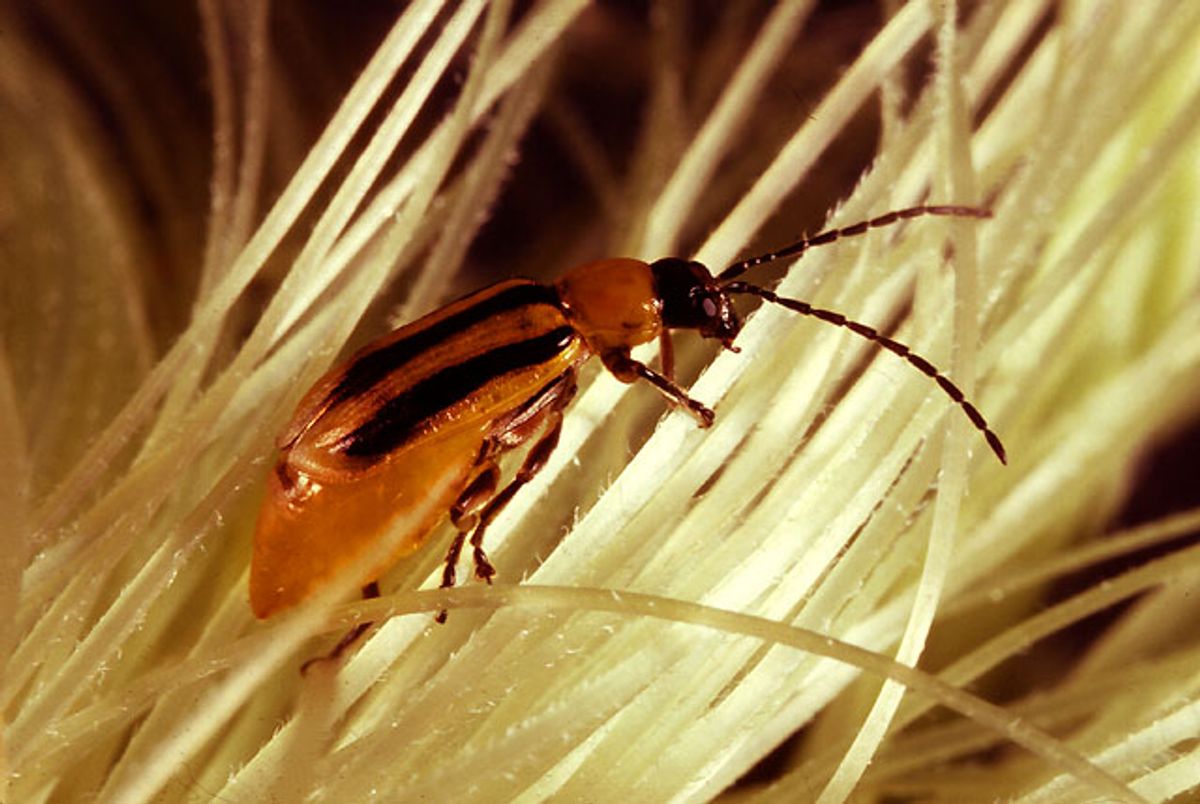 A parasitic worm is becoming rapidly resistant to the corn that was genetically engineered to kill it, according to a new study.

Published Monday in the Proceedings of the National Academy of Sciences, it's a cautionary tale of how bioengineering is only beneficial until evolution manages to catch up -- and how mismanagement of biotech crops can hurry up that process.

The crop in question, known as Bt corn, was first planted in 1996. Able to resist rootworms and corn borers, it helped farmers increase their yields and reduce their use of conventional pesticides. It worked so well that it now accounts for three-quarters of the U.S. corn crop. Wired explains how everything went wrong:

By the turn of the millennium...scientists who study the evolution of insecticide resistance were warning of imminent problems. Any rootworm that could survive Bt exposures would have a wide-open field in which to reproduce; unless the crop was carefully managed, resistance would quickly emerge.

Key to effective management, said the scientists, were refuges set aside and planted with non-Bt corn. Within these fields, rootworms would remain susceptible to the Bt toxin. By mating with any Bt-resistant worms that chanced to evolve in neighboring fields, they’d prevent resistance from building up in the gene pool.

But the scientists’ own recommendations — an advisory panel convened in 2002 by the EPA suggested that a full 50 percent of each corn farmer’s fields be devoted to these non-Bt refuges — were resisted by seed companies and eventually the EPA itself, which set voluntary refuge guidelines at between 5 and 20 percent. Many farmers didn’t even follow those recommendations.

Fast forward to 2009, when Gassmann responded to reports of extensive rootworm damage in Bt cornfields in northeast Iowa. Populations there had become resistant to one of the three Bt corn varieties. (Each variety produces a different type of Bt toxin.) He described that resistance in a 2011 study; around the same time, reports of rootworm-damaged Bt corn came in from parts of Illinois, Minnesota, Nebraska and South Dakota. These didn’t represent a single outbreak, but rather the emergence, again and again, of resistance.

In the new paper, Gassmann describes further incidents of Bt resistance in other parts of Iowa. He also found rootworms resistant to a second variety of Bt corn. Moreover, being resistant to one variety heightened the chances of resistance to another. That means corn engineered to produce multiple Bt toxins — so-called stacked varieties — won’t do much to slow the evolution of rootworm resistance, as was originally hoped.

“Unless management practices change, it’s only going to get worse,” Aaron Gassmann, an Iowa State University entomologist and co-author of the study, told Wired. “There needs to be a fundamental change in how the technology is used.”