The stunning dishonesty of Charles Murray 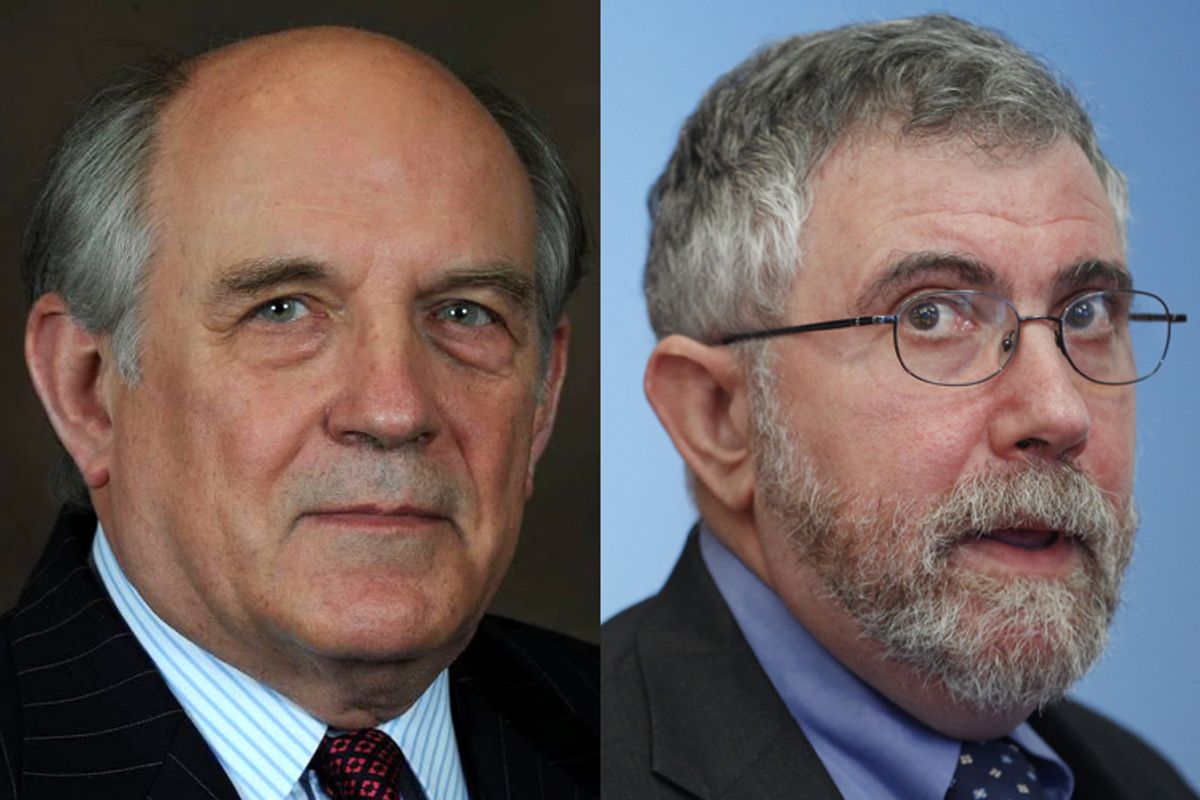 I should no longer be shocked at the intellectual dishonesty of Charles Murray, but I am. On Tuesday Murray made a brief reply to his critics, most notably Paul Krugman, who have accused Murray of racism for much of his work, but especially his 1994 book, “The Bell Curve.” Murray rejoined the news cycle last week, when Rep. Paul Ryan cited him as an expert on poverty and the troubles of “inner city” men, who, in Ryan’s words, are “not even thinking about working or learning the value and the culture of work.”

Krugman – and I and Josh Marshall and lots of other people – explained why citing Murray got Ryan accused of racism. The New York Times columnist stated flatly that Murray is “most famous for arguing that blacks are genetically inferior to whites.” Josh and I and others spent a lot more time and energy explaining Murray’s pernicious race and class biases, but of course Murray replied only to Krugman. And to do so, he cherry-picked a few sentences from “The Bell Curve” in which he and his late co-author, Richard Herrnstein, acknowledged there remains debate over whether the lower IQ scores of blacks and Latinos are genetic or environmental.

If the reader is now convinced that either the genetic or environmental explanation has won out to the exclusion of the other, we have not done a sufficiently good job of presenting one side or the other. It seems highly likely to us that both genes and the environment have something to do with racial differences. What might the mix be? We are resolutely agnostic on that issue; as far as we can determine, the evidence does not justify an estimate.

Let me grant this to Murray: That paragraph is indeed in his book. But the rest of its 800 pages are devoted to arguing that blacks and Latinos have lower IQ than Asians and whites (whites are inferior to Asians, by the way); that IQ is largely (though not exclusively) hereditary; that lower IQ means these groups are more likely to commit crime and drop out of school and have illegitimate (and lower IQ) babies and live in poverty, and that there's not much to do to help those groups rise. In fact, Murray and Herrnstein argued, American welfare policies that provide aid to women with children “inadvertently social-engineer who has babies, and it is encouraging the wrong women.”

When you’ve spent an entire book arguing that blacks and Latinos have lower IQs, more out-of-wedlock babies and higher reliance on welfare, it’s clear who “the wrong women” are. Oh, and the book also argued for limiting immigration, because unlike earlier waves of immigrants, today’s are coming from countries with a lower national IQ. In what world are those arguments not racist?

Now, Ryan may argue that he was thinking about Murray’s earlier discredited work, “Losing Ground,” which argued that poverty, especially among black families, was due to their propensity to have babies outside of marriage, shun work and rely on welfare. But that book, too, relied on racial stereotyping and was discredited by rigorous research, so Ryan doesn’t get himself out of trouble if he cites “Losing Ground.”

As I argued last week, Ryan (and Murray’s) best potential argument that they’re not racist is to promote the conclusions of Murray’s last book, “Coming Apart: The State of White American 1960-2010,” in which he sadly concludes that rising poverty among whites is due to their sharing the cultural habits he once attributed mainly to blacks, mainly single motherhood and shiftlessness. But like all of Murray’s work, “Coming Apart” is shot through with genetic fatalism, that lower IQ people are on balance lazier, more promiscuous and more crime prone, and that social policy that seeks to help them only encourages them to reproduce, worsening our problems.

Perversely, there’s only one social policy intervention Murray wholeheartedly supports, and that’s easier access to effective contraception. Which helps explain why right-wing culture warriors get to claim contraception is a form of eugenics, because for people like Charles Murray, it is.

Learning from the flap over “The Bell Curve,” Murray now insists IQ is “intractable” – he no longer uses the words “genetic” or “innate,” though he still emphasizes that it’s largely hereditary. And he continues to argue that the ways we decide to structure society and create opportunity can’t make a difference. I come from a group of people, Irish Catholics, whose median IQ has climbed as the opportunities provided to us increased as well. Murray is wrong. IQ is not destiny.

Murray ends his self-defense with this last remarkable piece of dishonesty:

I’ll leave you with this thought: In all the critiques of The Bell Curve in particular and my work more generally, no one ever accompanies their charges with direct quotes of what I’ve actually said. There’s a reason for that.

That’s absolute bullshit. For one thing, I’ve written about Murray’s work extensively, and with lavish documentation and direct quotes (and I’m not the only one). Since I debated Murray on WBUR in 2012, I know he knows my work. So he’s a liar when he says "no one ever accompanies their charges with direct quotes of what I’ve actually said." You can trust the rest of his self-defense as much as you can trust that last self-serving statement – which means not at all.