Westboro Baptist Church's massive setback -- that no one's talking about

When Arizona's bill to allow discrimination failed, the religious right wept. But this could be far worse for it 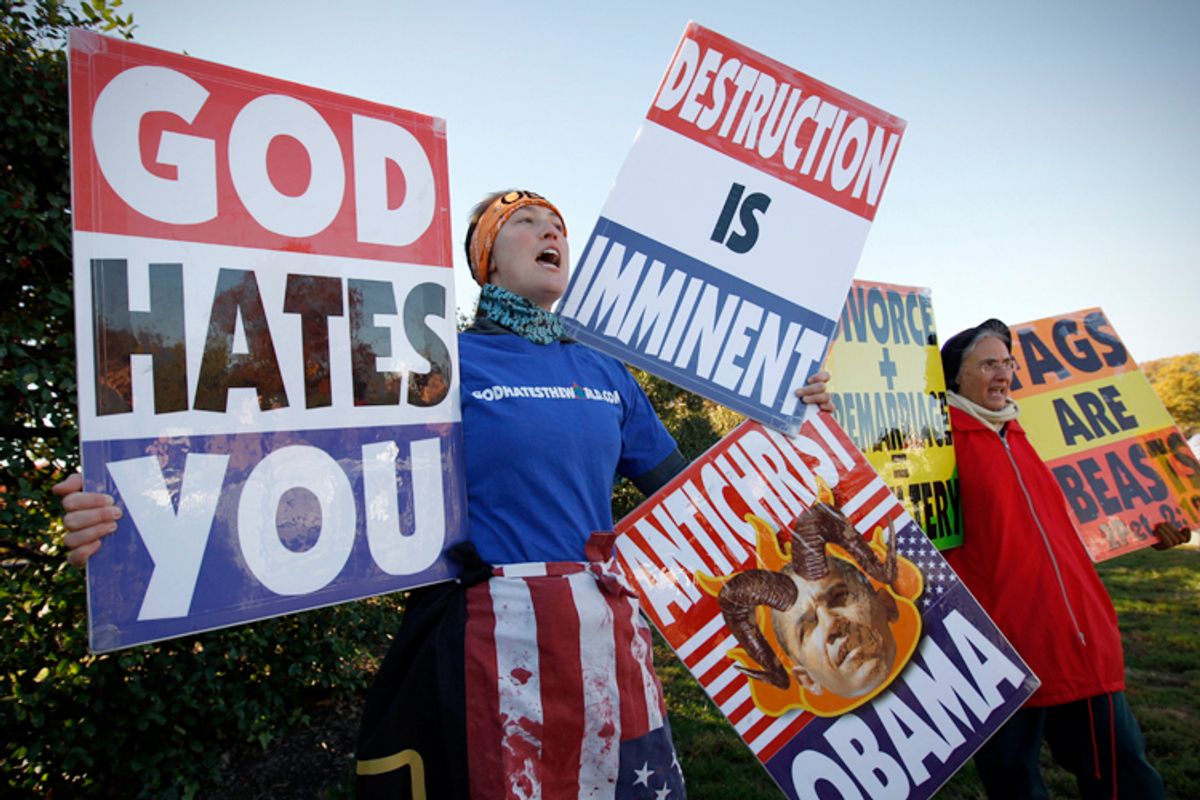 A federal judge in Missouri dealt a huge blow to religious liberty last week when he upheld a law forbidding individuals from picketing within 100 yards of a funeral. Passed nearly a decade ago, the law is clearly targeted to prevent members of the Westboro Baptist Church from practicing their religion, a religion that they claim commands them to provide witness at funerals.

This effort to destroy the religious liberty of the Westboro Baptist Church comes on the heels of Arizona Governor Jan Brewer’s recent decision to (according to some) destroy the religious liberty of business owners by vetoing a law that would endorse their ability to discriminate against gay people. Conservatives cried oceans of tears at the prospect of enforcing economic anti-discrimination against bigot bakers, citing their abstract commitment to content-neutral religious liberty. Yet, here we are presented with exactly the same situation, and conservatives are strangely quiet.

Their quiet is particularly odd because the Missouri law targeting the WBC is a much greater infringement on religious liberty than economic anti-discrimination laws are.

In the case of the funeral rules though, the law is forbidding the WBC from doing things required by their religious beliefs. From their voluminous TV interviews, it is clear that their deeply held religious beliefs command them to witness at funerals in the manner that they do. It is an article of their faith that they must spread the truth of God’s condemnation of America’s embrace of homosexuality and worship of the military at funerals, especially those of dead American soldiers whose deaths they regard as a function of God’s punishment of America. But now Missouri law forbids them from doing so.

So the funeral anti-picketing law actually forbids people from doing things that are specifically required by their religious beliefs while economic anti-discrimination law does not. The anti-picketing law generates a world where the WBC must necessarily violate the commandments of their religion while the anti-discrimination law does not. If you seriously believed in the principle of content-neutral religious liberty, the WBC case would be far more troubling and elicit far more outrage. Yet somehow it doesn’t.

The reason why it doesn’t is not mysterious. As I wrote earlier about the gay-bashing Duck Dynasty kerfuffle last December, arguments that proceed by appealing to content-neutral procedural justice are almost universally disingenuous and non-serious. In actual reality, people side with those with whom they sympathize substantively, and then temporarily adopt whatever content-neutral procedural rules generate their preferred conclusion. This is as true of the justness of firing people for saying unpopular things as it is for the justness of laws that might restrict religious liberty.

Here, conservatives can eject gallons of spittle from their mouths when it comes to discriminating business-owners because they sympathize with those owners. They can imagine either themselves, people they know, or people in their political tribe wanting to run a business without having to service gay people or gay weddings. And it makes them feel bad that those people won't be able to carry on like that, that those people will either have to find another way to make an income or reluctantly comply with anti-discrimination rules. Because they find such people with those particular beliefs and commitments sympathetic (beliefs they also hold, or once held, or that are held by people they know), they mobilize any number of largely disingenuous abstract appeals to content-neutral religious liberty in support of those people.

Conservatives cannot sympathize with the Westboro Baptist Church, however. If anything, it is conservatives that seem most disturbed by WBC's form of witnessing about God, probably because it is so disrespectful to the dead soldiers that conservative cultural circles hold up as demigods. Naturally, then, the pretended respect for content-neutral religious liberty fails to mobilize for WBC. Their message and their form of delivering it does not garner the necessary sympathy among conservatives for that to happen.

The fact that content-neutral appeals to specific processes are shell arguments that mask the real motivation of those making them is important to keep in mind as we progress. Anti-gay bigots are still sympathetic enough to conservatives that they can mobilize pretend shell arguments in their favor. As with racism, however, that will fade. The religious objections to racial integration no longer carry enough sympathy for pretend arguments about procedural liberty to gain that much currency among conservatives. The same will be true of anti-gay bigotry soon enough, and the hand-waving about procedural justice (which is not even violated in the case of anti-discrimination for reasons explained above) will fall away.