How to be an ally: What Piers Morgan can learn from W. Kamau Bell

The comic was ignorant about issues affecting the trans* community. But he shut up, listened, and now he's learning 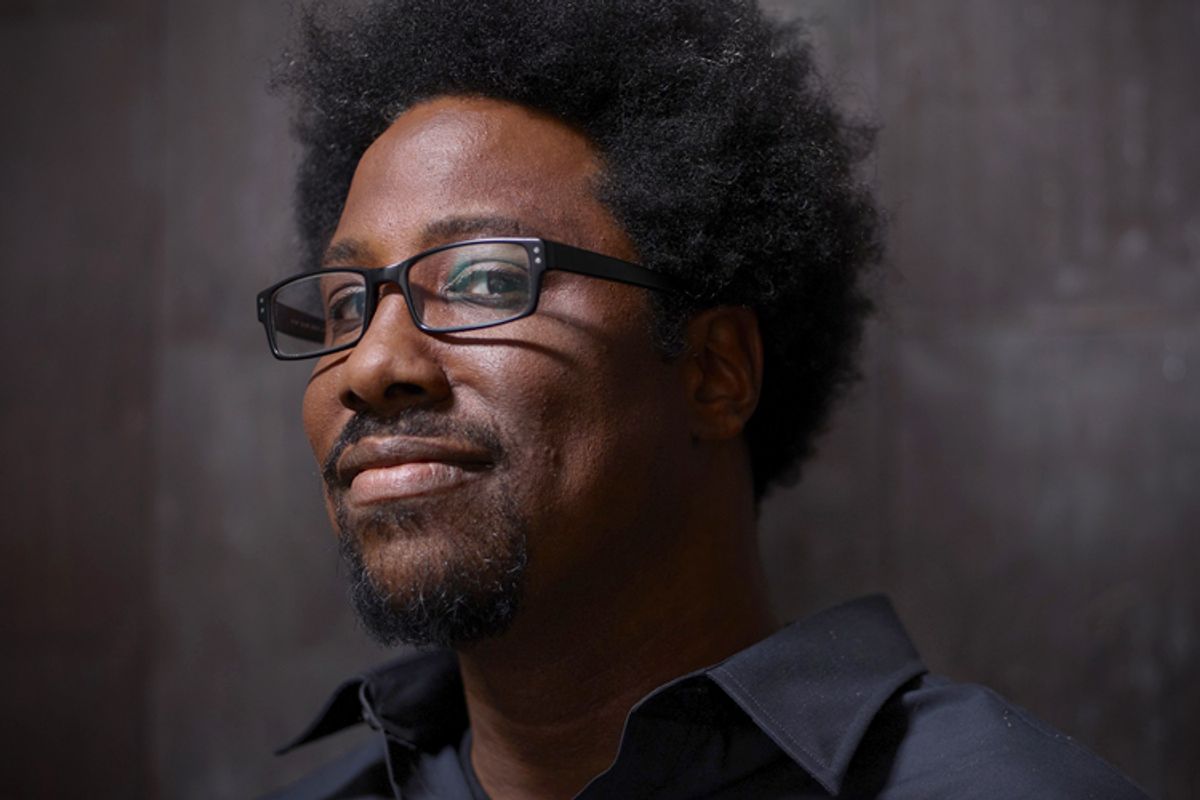 W. Kamau Bell was performing stand-up in the city where he established himself, San Francisco, when he launched into a bit about the first time he ever met a transgender woman. During the routine, Bell started exchanging some friendly banter with a man in the audience who identified as transgender -- except that Bell assumed he was a woman. After the show, the man took Bell aside and corrected him. The comic was deeply embarrassed and apologetic, but thankful. “I was so sorry, and luckily he understood that it was a mistake,” Bell recalled in an interview with Salon. "I would rather be corrected than look like a fool."

Since FXX canceled Bell’s show, “Totally Biased” -- which critics had praised for covering race and culture with humor -- Bell has been busy with a stand-up tour, "Oh, Everything!" Now he's eager to branch out and cover a wider range of subjects, including transgender rights. “You know me, unfortunately, as ‘the race guy,’” he said. “And I’m really excited at this point about being ‘the boundary-crossing guy.’” As a black comic who understands the inherent privilege of whiteness, Bell has found an intersection with another community that has long been marginalized and misunderstood by the majority.

“I may get some of it messed up,” Bell admitted, but he expressed a desire to “enter into it as an artist" and "not make fun of it," but instead, "make comedy about it."

“That seems to me more important than claiming the race base,” he said.

It’s certainly a conversation that needs to be considered more carefully by the mainstream. Take, for example, the case of Jared Leto -- a straight white man controversially tapped to portray a transgender woman in “Dallas Buyers Club” -- who made jokes at the expense of transgender people in his Golden Globes acceptance speech in January. That same month, talk show host Katie Couric asked invasive questions of “RuPaul’s Drag Race" star Carmen Carrera and "Orange Is the New Black" star Laverne Cox. Two weeks later, Grantland outed a transgender woman who committed suicide during the reporting process. Then, in February, former CNN anchor Piers Morgan weirdly threatened author Janet Mock after she pointed out his show’s offensive language that identified her only as “a boy until 18."

It seems that most of the recent stories highlighting a member of the transgender community have been tainted by the media’s ignorance of transgender issues -- a serious disservice by an institution in charge of disseminating information, especially when inflicted upon a community that experiences disproportionate rates of violence, suffers a suicide rate more than 25 times that of the general population, and in which 82 percent of children feel unsafe to be themselves. When Couric insisted on talking about transitioning bodies, Cox gracefully shut her down, explaining:

“The preoccupation with transition and surgery objectifies transgender people. And then we don’t get to really deal with the real lived experiences. The reality of transgender people’s lives is that so often we are targets of violence. We experience discrimination disproportionately to the rest of the community. Our unemployment rate is twice the national average; if you are a transgender person of color, that rate is four times the national average. The homicide rate is highest among transgender women. If we focus on transition, we don’t actually get to talk about those things.”

The media’s mess-ups have been rightly criticized by the transgender community and its allies, but the response has been a mixed bag: Morgan responded to the outcry especially poorly, claiming to be a victim of “cisphobia.” Couric, to her credit, acknowledged the criticism and clarified the offending segment -- though she did not explicitly apologize for it. Grantland apologized for its errors. Leto only vaguely acknowledged the trans community in his follow-up acceptance speech at the Oscars.

Though Bell was admittedly ignorant regarding transgender issues prior to his San Francisco experience -- and aired problematic representations of transgender issues on "Totally Biased" -- unlike some of the aforementioned figures in the media, he is actively trying to learn from past mistakes. “I think that ultimately, if these people want to be allies, you really have to be willing to be corrected. And that’s the thing. It’s not always fun to be corrected and it’s also really helpful if you want to be a part of the discussion,” said Bell, who added that he’s not “trying to be the leader of the conversation.”

This is an approach that the rest of the media, even the well-intentioned, would benefit from. “I think that’s what happened with Jared Leto,” said Bell. “There was a sense, you felt like, when somebody challenged him on it he was like, ‘No, no, no. I know.’ For me, that’s the place I want to be clear about. I will lead a race discussion because I feel pretty solid about that, but if there’s a transgender person in the room, I’d like to pass the mic to them.”

Julie Rei Goldstein, a transgender actress, voice-over artist and activist who works with transgender artist advocacy group TransHollywood, has praised Bell’s work, specifically a comment thread in which Bell responded to attacks against the trans community on his Facebook page. Goldstein told Salon over the phone that “instead of making that distinction of ‘you should’ or ‘you shouldn’t be offended,’ [Bell] took the arguments that basically the trans* community has been saying, and amplified [them] by giving his own perspective on things that he has seen through his own community’s historical oppression."

Across the board, none of the media high-profile offenders -- not even Morgan -- would consider themselves unsupportive of the transgender community. In fact, Morgan claims to support “the issue 100 percent.” He considers himself an ally.

But, as Bell points out, Morgan’s mistake (aside from his tantrum) was that he took the stance “that ‘I understand everything.'”

Goldstein echoed Bell’s sentiments, explaining that the biggest problem with a lot of people who are saying, "‘Don’t attack me, I’m an ally,’ is that they’re not allowing the trans* community to give their own dialogue, to tell their own stories, to say what they’ve found to be discriminatory.”

“It seems like a lot of these ‘allies,’ rather than listen to the trans* communities ... they’ve tried to steer the conversation and that’s not what an ally does,” Goldstein said. “An ally amplifies that conversation.”

This might not be something that comes naturally to journalists and television personalities, who are often seen as experts that should guide a conversation. But not everyone knows about everything, and, as evidenced by the media’s recent mistakes, perhaps it’s time to own up to that.

“If you’re having a conversation, or you’re starting a conversation regarding trans* issues, the least you can do is that initial research on what’s offensive and what’s not,” said Goldstein, citing the GLAAD Media Reference Guide as one of many resources available on the Internet.

Goldstein added that it’s OK to ask someone questions like, “How do you self-identify?" or, "What pronouns would it be correct to refer to you by?” before an interview. “That’s not an offensive thing to ask at all, and actually, it’s very respectful, because it shows interest in not disrespecting somebody,” she explained.

It’s also important to understand that people who make mistakes can learn from them and move forward. According to Goldstein, even Morgan can become a true ally, but “it’s going to be about him no longer creating the conversation ... but allowing people in the trans* community to initiate the conversation and guide the conversation.”

Meanwhile, Bell is determined to “keep the conversation going.” The comic thinks it is far riskier to tell others, “Let me explain to you how this works,” than it is to make comedy around a subject that’s not fully understood by the mainstream.

“I feel like it’s important as an ally -- which is going be the word of 2014 if I have anything to say about it -- we’re in the conversation but we should also take a notebook and a pen with us to write some stuff down to go Google later,” declared Bell.

“And look, I know historically white guys have done a pretty good job of dictating when the conversation ends, but that’s changing,” he added.

Bell found his way into a discussion about the transgender community through his own experiences with ignorance and oppression. But anyone can participate in the conversation if they “stop thinking there’s a limit on how progressive and liberal the world can get,” he said. “That’s why I think it’s so funny about the transgender thing, it’s basically people trying to put an ideology behind [a feeling]; ‘It’s just weird,’ is what they really want to say. So I think the more you try to justify your discomfort, it starts to sound more, uh, what’s the word I’m looking for? ‘Tea Partyish!’

“There’s always some point in life where everybody goes, ‘Well, the world has gotten as crazy as it’s going to get and this is a good stopping point,’" he said. “And I just feel, ‘No, no, no! The world is going to keep moving and if you’re lucky and live long enough, you’re going to see something that you never could have imagined.’”