The modern horror of MH370: Vanishing planes, conspiracy theories and the fear of not knowing

Grasping for answers about a missing airplane, we conjure ridiculous theories to avoid a tragic truth 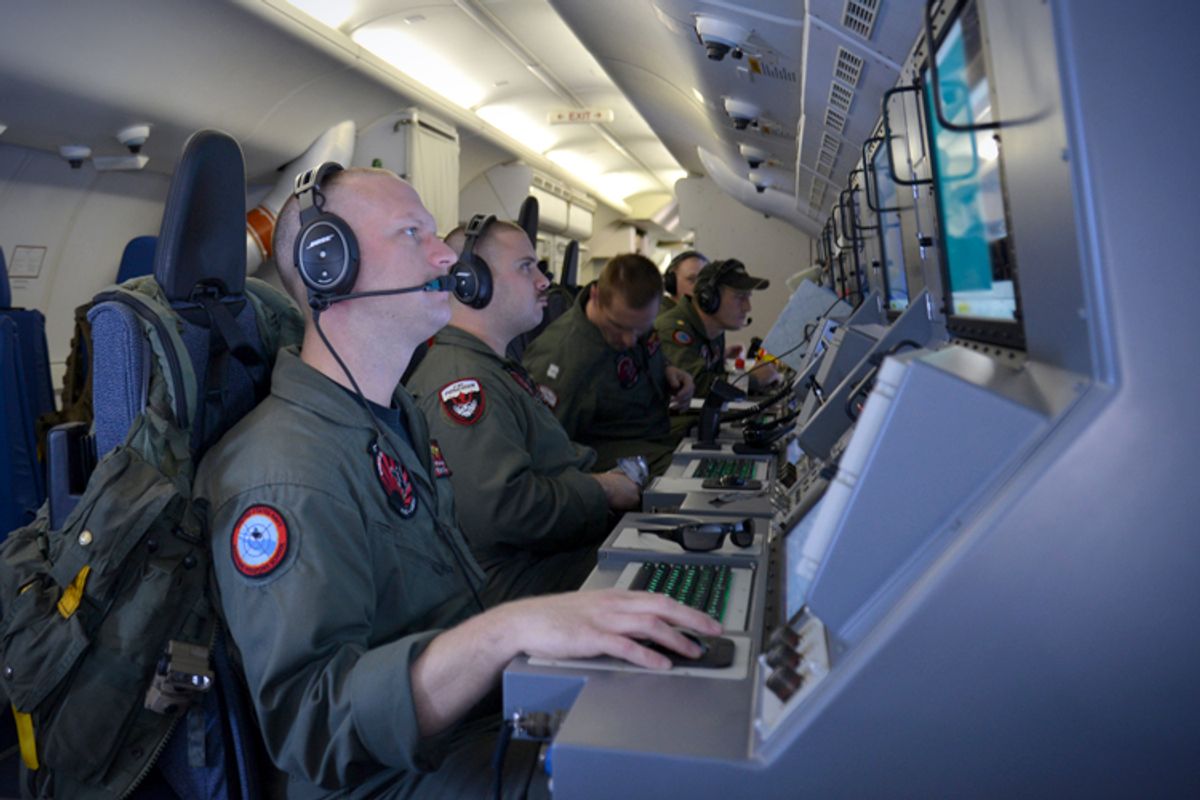 Crew members on board aircraft P-8A Poseidon assist in search and rescue operations for Malaysia Airlines flight MH370 in the Indian Ocean, March 16, 2014. (AP/Eric A. Pastor)
--

The day before Malaysia Airlines Flight MH370 departed Kuala Lumpur International Airport, a Malaysian court reversed the acquittal of longtime opposition leader Anwar Ibrahim on charges of violating anti-sodomy laws. The revelation that MH370 pilot Zaharie Ahmad Shah was a strong Anwar supporter (and may even have been one of his relatives) encouraged some reckless commentators to speculate that the plane's inexplicable disappearance might have something to do with Shah's disappointment at the latest distressing development in Malaysia's longest-running political melodrama.

Subsequent reporting has uncovered scant evidence that Shah was the kind of person who would willfully endanger the lives of 227 passengers. But for anyone familiar with the modern history of Malaysian politics, the spectacle of Anwar Ibrahim getting dragged into the story isn't the least bit surprising. When in doubt, at least some members of a stunned nation latched on to the trauma they knew best.

Once widely perceived as the anointed successor to Malaysia's most powerful and longest-serving prime minister, Mahathir Mohamad, Anwar Ibrahim ended up driven from power when Mahathir suddenly saw him as a threat, and mobilized the entire Malaysian system of justice to crush him. Anwar partisans and most impartial foreign observers have long been convinced that the sodomy charges were nothing more than a trumped-up fraud. The reversal of the acquittal, to many Malaysia-watchers, offered just one more piece of evidence proving the corruption of the ruling party.

Narrative, like nature, abhors a vacuum. In the absence of hard data, faced with an astonishingly vanished plane, everyone is projecting their innermost fears and desires on whatever template is nearest at hand. The conundrum is a Rorschach ink blot to be interpreted as we please. As many have noted already, the disappearance of a state-of-the-art jetliner, at a moment in history when the movement of individual humans can be routinely watched by satellites and every phone is a tracking device, is inconceivable. This isn't how the all-seeing surveillance state is supposed to function. MH370 rebukes everything we thought we knew about the world we live in. We're not all connected, all the time. Even Reddit can't find the plane. Our technology isn't working.

The failure spawned uncertainty and anger high and low.

"I follow the development (search and rescue mission) and am puzzled that in a modern world with such advanced technology, we are still unable to track the 63-meter-long aircraft," [said former prime minister Mahathir Mohamad]...

"Given today’s technology, the delay smacks of either dereliction of duty or reluctance to share information in a full and timely manner," [The Chinese news agency} Xinhua said. It said Malaysia "bears inescapable responsibility.”

The assumption implicit in Xinhua's denunciation is that it should be impossible to lose a plane. So there must be another explanation. In Malaysia, domestic political antagonisms revved up. Not only is the government corrupt, the thinking went, but it was incompetent, unable to properly search for a missing plane or even ask for relevant information from its neighbors. On a broader regional scale, the narrative expanded to include China's growing economic clout. Therefore, the 150 Chinese passengers on the plane must be held for ransom somewhere in Central Asia.

It goes without saying that this surveillance black hole is a fertile bed for conspiracy theorizing ranging from alien abduction to Pitbull-Shakira duets to the obvious conclusion that what's really happening here is a bio-catastrophe covered up by the U.S. military!

Betrayed by technology, driven to desperate anxiety by the gaping holes in our vaunted net, we're forcing MH370 into boxes that it can't fit into. But what's still missing? How about our responsibility to face up to the awful truth. When a jetliner goes missing for 10 days, and there is no actual evidence to support conspiracy or terrorism, then, sooner or later, we must accept what we don't want to know.

The failure of the Panopticon, and the cognitive dissonance provided by a faraway tragedy, has created the perfect conditions for ridiculous conjecture to bloom. Instead of grappling with human horror, we can divert ourselves by speculating about the mystery. On this tabula rasa we can write any story we want. So the plane is in Kazakstan! Or Somalia! Or the U.S. Naval Base on Diego Garcia -- best of all, the passengers might still be alive.

We embrace the mystery because deep down, we don't want to admit that what really happened to MH370 will turn out to be unbearably prosaic and tragic. Like, maybe, an out-of-control electrical fire that overcame the valiant efforts of desperate pilots. (Or maybe not.) We don’t want to be reminded that even with our fantastic technological accomplishments, our godlike abilities to see where every sparrow falls, accidents still happen, and people die for no good reason. Even in the 21st century, our technology fails. A planes crashes. And no one sees it happen.