If there were a real progressive movement in the U.S. it would side with producers against rentiers -- of all kinds 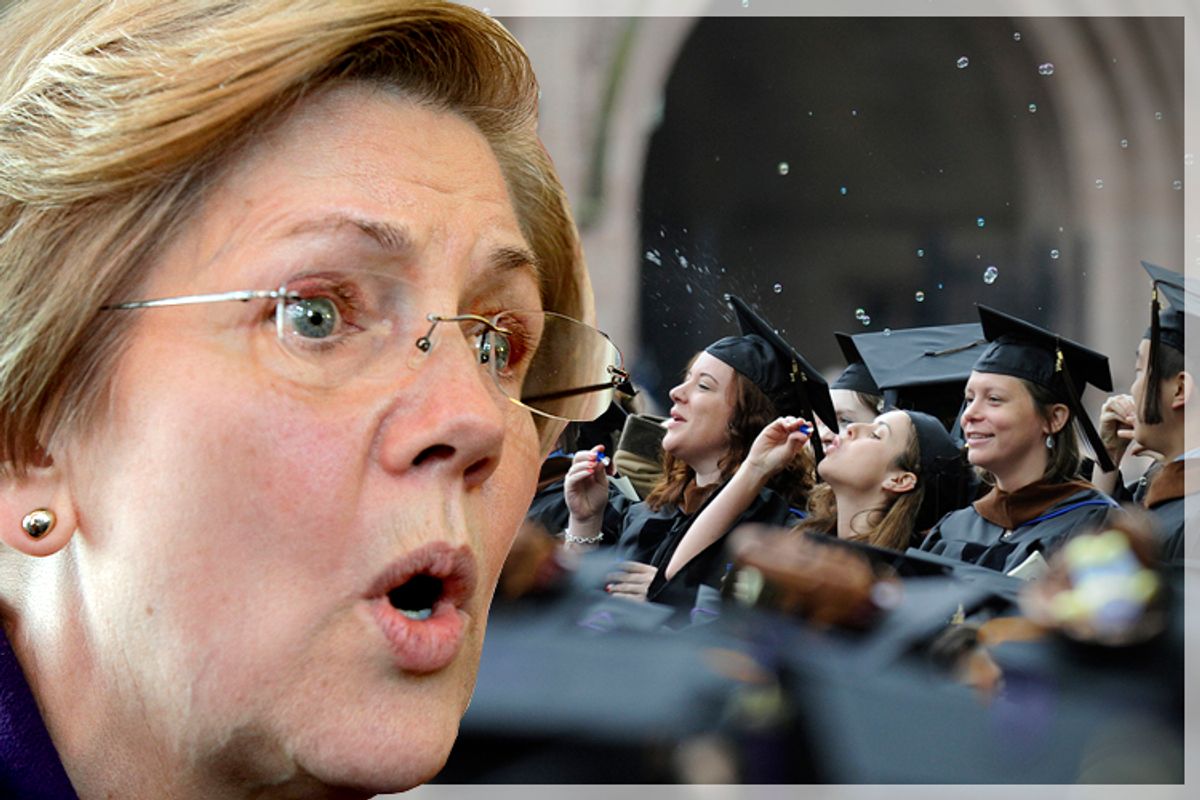 Will the professional class doom American progressivism? The very suggestion seems heretical. After all, college-educated professionals are an increasingly important part of the base of the progressive movement and the Democratic Party. According to the Center for American Progress Action Fund:

Professionals are now the most Democratic and fastest-growing occupational group in the United States, and they are a huge chunk of the burgeoning white college graduate population. They gave Obama an estimated 68 percent of their vote in 2008. By the middle of this decade, professionals will account for around one in five American workers.

This trend is treated as something to be celebrated by most progressive activists, thinkers, commentators and politicians—most of whom happen to be members of the professional elite by birth or education. I beg to differ. Here are three reasons why the growing domination of the center-left by college-educated professionals in the U.S. and other Western democracies is bad on the whole for progressive politics.

You can’t create or sustain a decent welfare state without higher taxes on the professional class. If you want to expand Social Security, extend the ordinary duration of unemployment insurance benefits, and create new tax-and-transfer payment entitlements for family leave and long-term eldercare, you have to pay for these programs. And while you can pay for a more generous welfare state partly by means of higher taxes on the rich, the experience of European social democracies suggests that you also need to raise payroll taxes and/or consumption taxes on upper-middle-class professionals and maybe even on median-income workers.

But today’s Democratic Party panders to the taxophobia of the near-rich as much as today’s Republican Party panders to the tax-hating super-rich. In 2008 President Obama promised that he would not raise taxes on any American household making less than $250,000 a year — a number that Hillary Clinton first floated during the primary campaign. Obama repeated that pledge in 2012. Obama has also called for limiting tax expenditures like the home mortgage interest deduction and lifting the cap on Social Security payroll taxes … for households making more than $250,000.

According to the IRS, only 2 percent of American households make more than $250,000. In 2008 a household that made $250,000 earned five times more than the median U.S. household income. And yet progressives are supposed to consider this elite minority part of the “middle class.”

The new “Better Off Budget” of the Congressional Progressive Caucus purports to provide a bold progressive vision. But while it endorses some good ideas, like expanding Social Security, the Congressional Progressive Caucus, like Obama, pampers the upper middle class. The budget calls for returning to Clinton-era tax rates — but only for households making over $250,000. Even worse, it proposes to cut taxes on the near-rich, by creating a “new Hard Work Tax Credit for households earning less than $150,000.” This is the self-professed left, mind you. Why on earth are congressional “progressives” calling for even more tax credits for Americans in the top 2 percent?

The center-left’s outrage about income inequality and low taxation is curiously selective. Yes, most of the gains from recent economic growth have gone to the 1 percent, or even the 0.01 percent — but so what? Why not raise taxes on the 2 percent, as well as the 1 percent?

Doctors, lawyers and professors tend to think of themselves as altruistic servants of the public good. At the same time, many insist on being compensated well enough to belong to the top few percentiles in income, rather than being paid like teachers, nurses, police officers and firefighters. This contradiction generally does not bother professionals, but it should bother progressives.

The dirty secret of the American professional elites is credential rents. By restricting the supply of practitioners — you generally can’t be a tenured professor, a practicing lawyer or a doctor without the right degree — the guilds that the professions control artificially drive up the price of college education, legal services and physician services.

The answer is: subsidies!

We professionals will continue to use our guild-monopoly power to gouge the consumers of professional services, so that we can maintain our membership in the few percent. But being progressive, we care about the poor — we really, sincerely do! That’s why we won’t object, if the government taxes those richer than us in the 1 percent to subsidize the poor, so they can afford the high prices our monopoly professional guilds maintain for our benefit. The poor get more access to professional services; we few percent professionals get to keep exploiting our monopoly-based market power; and the 1 percent super-rich get the bill for the subsidies. What’s not to like?

As a political formula to align the interests of near-rich professionals with working-poor voters, subsidizing the purchase by the poor and middle class of overpriced professional services may be clever. But it’s hardly progressive. Progressives are right to go after greed and rent-seeking in the financial industry and corporate boards. Why not go after greed and rent-seeking among professors, lawyers and doctors, too?

In my experience, much of the professional class is not very interested in working Americans. In principle, professional-class progressives are against poverty and support economic justice. But on the list of issues that excite college-educated progressives, the bread-and-butter issues that dominated Farmer-Labor Progressivism and New Deal liberalism are often low priorities, compared to saving the planet from global warming or freedom from NSA surveillance.

This is not a caricature. I base my observation (admittedly a personal one) on a quarter-century of experience in journalism and the nonprofit sector. If you want to fill an auditorium at a think tank, magazine office or other venue, hold a panel on one or more of the non-economic issues I just mentioned and the seats will fill up quickly with enthusiastic, affluent, mostly white upper-middle-class progressives. If you want to hold a panel on the minimum wage or workplace tyranny, expect to have a lot of empty seats. To avoid embarrassment, you might reserve a smaller room.

The recent wave of protests by low-wage fast-food workers confirms my point. Their concerns had been neglected for years by upper-middle-class progressives more concerned with inspiring world-saving crusades than trench warfare against McDonald's. Only when the workers took matters in their own hands did most of the center-left credentialed class start paying attention (perhaps temporarily).

During the Progressive Era and the New Deal era that succeeded it, idealistic professional-class reformers were only one element of a coalition they were forced to share with the representatives of farmers and blue-collar workers — groups that made up a majority of the workforce in the mid-20th century. Take away the farmer-labor wing of the center-left, and you are left with upper-middle-class do-gooders like Woodrow Wilson and Eleanor Roosevelt. A progressivism based among college-educated professionals is going to be much more elitist, and perhaps much less egalitarian and effective, than one dominated by union leaders, urban bosses and agrarian politics. True, nonwhite and low-income Americans are important in the Democratic electorate — but they are grossly underrepresented in the organized center-left.

If there were a real progressive movement in the U.S., its attitude toward the professional class would be more skeptical than celebratory. In order to fund a decent-size welfare state, genuine progressives would demand higher taxes on Americans making more than $100,000 — or maybe more than $50,000 or even $30,000. Why not? Polls show that Americans are willing to pay somewhat higher taxes as long as they get better benefits like expansions of Social Security or Medicare. The pressure to exempt professional households that make between $100,000 and $250,000 a year is not coming from Middle America.

Genuine progressives would side with producers, of all kinds, against rentiers, of all kinds — including credential-rentiers like the members of professional monopoly guilds. If software can replace pricey lawyers, if moderately paid instructors can replace highly paid professors, if skilled nurses were allowed to do some of the things that only M.D.s now do at a fraction of the salary, the working-class majority would benefit immensely.

The proletarianization of the professional class should be welcomed and encouraged by the progressive movement. Already independent physicians are being replaced by doctors who are salaried employees of hospitals. Let prole lawyers work for legal services corporations and prole professors work for educational service companies. Unable to set their own incomes by means of guilds, many downwardly mobile professionals might belatedly discover the benefits of unions and legislation protecting workers against exploitation by managers and investors.

The bad news, then, is that the self-serving minority of credentialed professionals, rather than the majority of wage earners, is increasingly important in setting the agenda of the center-left. The good news is that the contradiction between progressive reform and the self-interest of the professional elite may come to an end as technology and economic reorganization eliminate the professions altogether.