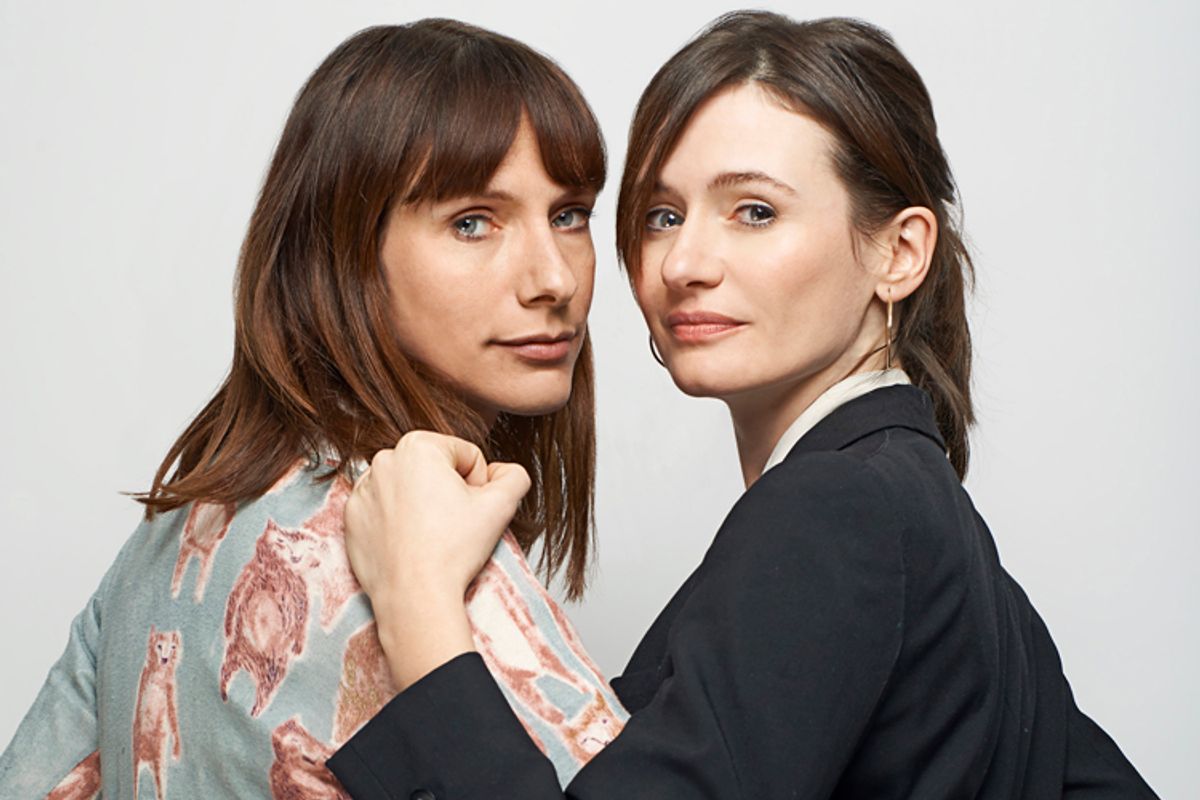 Emily Mortimer’s character on “The Newsroom,” ostensibly a strong, accomplished woman deftly holding down a powerful position in a man’s world, has been criticized for being not that at all. Indeed, MacKenzie McHale has, at times, exhibited rom-com-level silliness and unprofessionalism during office hours. The decidedly less accomplished women of “Girls” have often been cited for cattiness, pettiness, self-absorption and frustrating inertia. Perhaps the executives at HBO felt there was not enough material to fill the spectrum in between these two depictions and so, last night, premiered the first two installments of Mortimer’s latest vehicle, “Doll & Em.”

“Doll & Em,” created my Mortimer (Em) and friend Dolly Wells (Doll), focuses on the professional and interpersonal struggles of two 40-year-old besties living in Los Angeles. Mortimer – in a role tailor-made for her and by her! – plays a successful actress currently filming a movie with Susan Sarandon who is nevertheless inept at navigating the Hollywood social landscape and still flustered by the audition process. Wells plays her best friend, fresh from an ugly breakup, whom Em flies, all-expenses paid, over from the U.K. to be her assistant. Though Em is fond of telling others that Doll is more of a friend than an employee, her well-intended gesture is obviously doomed from the moment she tells her employee how she prefers her coffee (“frothy”).

Doll and Em have known each other since childhood. There is a photo of the two that, as set dressing, attests to that. Apparently, such an overwhelming spirit of competition exists between them that it’s a wonder they managed to remain even cordial over the last three decades. Reunited, they try to one-up each other in virtually everything: grief, crying on cue, procuring Sarandon’s attention. At one point in the second episode, Em, though married, seduces the object of Doll’s meager affections after a couple of sips of champagne and a dip in the hot tub. Later, absurdly, Doll and Em end up in the waiting room of a casting session auditioning for parts in the same project. (Doll is, by the way, not an actress.)

This is not one of those situations in which a male critic has difficulty accepting women behaving badly. (At least, I hope not!) It’s just that once the nature of Doll and Em’s friction is clear – the source has yet to be revealed – their constant competition becomes predictable and quickly tiresome. Combine that with the fact that “Doll & Em” relies heavily on the kind of awkward moment/cringe humor that was established and exhausted so precisely by U.K. comedies like “The Office” and “Extras.” “Doll & Em” has less in common with those Ricky Gervais creations than with Stephen Merchant’s narratively limp HBO offering from last year, “Hello Ladies.”

Both shows are set in the modern Hollywood milieu where being in the movie business isn’t really that awesome, and glamorous, exclusive parties are all just gilded red herrings. In the second episode, Doll runs afoul of Sarandon, playing – as we’ve learned to expect from “Extras” and “Episodes” among others – an evil version of herself. Both Doll and Em seem alternately surprised at how mercurial the world-class actress turns out to be. Us outsiders know all of this already and, guess what? A shit-ton of us still want to be in the movie business if for no other reason than that those elite folk get to make movies and TV shows about how let down they are by it all.