Republicans' clumsy "You go girl!" outreach relies on a very odd view of both women and "common sense" 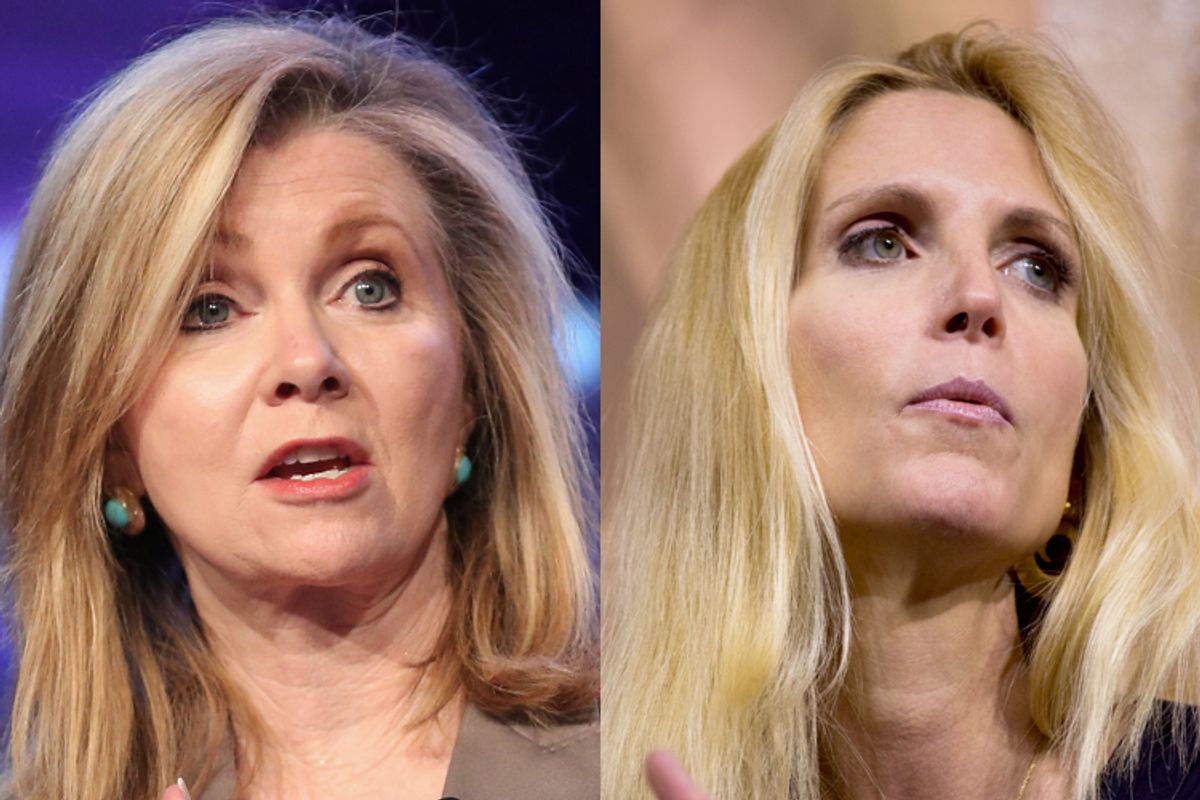 For those women who haven't already been won over by the new ads featuring super-cool guys wearing leather jackets and practical ladies exercising in the woods, Republicans have another way to appeal to their modern sensibilities: trumped-up rhetoric about how powerful and unstoppable women are in achieving anything they set their minds to -- all without any help from the stupid government!

It's kind of like if the Spice Girls really, really hated the idea of raising the minimum wage or funding Head Start.

So it was probably some version of this "You go, girl!" outreach that the head of a conservative PAC in Texas was playing at when she announced earlier this week that equal pay laws don't offer "real-world solutions" to the problems faced by women today.

"Women want real-world solutions, not more rhetoric. ... Women are extremely busy, we lead busy lives whether working professionally or working from home. And, and ... times are extremely busy," Cari Christman explained in an interview with Texas' "Capital Tonight," seemingly stumbling over some talking point she'd badly forgotten. "It's just a busy cycle for women, we've got a lot to juggle. When we look at this issue, we say, 'What's practical?' We want more access to jobs. We want to be able to go and get a higher education degree at the same time that we're working or raising a family. That's common sense, and we believe it's a more practical way to approach the problem."

The Lilly Ledbetter Fair Pay Act? Not practical, according to Christman. Incoherent banalities about "busy" women and the life-work balance with no alternative policy recommendations to speak of? Welcome to the GOP's "real-world" solutions.

Less than 24 hours later, the executive director of the Texas Republican Party agreed that equal pay laws aren't the answer for today's women. The real problem, according to Beth Cubriel, is the fact that women are terrible negotiators. Don't try to get legal recourse once you find out your employer is paying your male colleagues more money for the same work (Texas will fight you on the statute of limitations, anyway). Instead, host a viewing party of "Glengarry Glen Ross" for your friends and absorb the timeless wisdom of "Always be closing" if you want to make a living wage. You can do it, girlfriend! Bootstraps, or whatever! (Cubriel, besides being an apologist for discrimination, is also wrong about women as negotiators.)

This is the empty, clumsy language of empowerment that the GOP is hoping will fool women voters into forgetting about the actual policies at play  -- in Texas and the rest of the country.

The Texas stumbles were a cynical and embarrassing ploy to sell women on transparently anti-women policies, but the best articulation of this effort to paint measures addressing systemic and long-standing inequities in the workplace as disempowering came this week courtesy of the Minnesota state Legislature. Republican state Rep. Andrea Kieffer argued that a series of economic reform measures -- including a small increase to the minimum wage and a paid sick and family leave policy -- were actually hurting women.

“We heard several bills last week about women’s issues, and I kept thinking to myself, these bills are putting us backwards in time,” Kieffer said of the reforms. “We are losing the respect that we so dearly want in the workplace by bringing up all these special bills for women and almost making us look like whiners.”

Leave women alone, the conservative argument goes, when they are negotiating fair pay, addressing discrimination at work or balancing the responsibilities of career and family. Because policies crafted to challenge the well-documented consequences of institutional sexism are really very condescending. Women are adults, after all! They don't need to be babied by Uncle Sugar when it comes to tackling centuries of gender bias that has, you know, contributed to a pretty devastating poverty rate among women and female-headed households, as well as the pathological undervaluing of women's labor across almost every industry.

At the national level, this is verbatim what politicians like Tennessee Rep. Marsha Blackburn -- the new face of the GOP's pseudo-feminist revolution -- have to say about equal pay laws and similar measures. According to Blackburn, modern women simply don't want them.

"You know, I’ve always said that I didn’t want to be given a job because I was a female, I wanted it because I was the most well-qualified person for the job. And making certain that companies are going to move forward in that vein, that is what women want," she remarked this summer on "Meet the Press." "They don’t want the decisions made in Washington. They want to be able to have the power and the control and the ability to make those decisions for themselves."

This scam about the government staying out of women's business becomes all the more absurd when you consider just how enamored the GOP is of forcing the state into women's personal lives.

As much as Republicans try to argue that women can, at the very least, be trusted to control their libidos and keep their knees together (thanks for that one, Ann Coulter) without the government stepping in, it's clear that when it comes to making reproductive health decisions, the GOP believes women need all the guidance from they can get.

Republican rhetoric about modern ladies making their modern way in the modern world falls away pretty quickly when you apply a little pressure -- particularly when it comes to reproductive rights and abortion care. This becomes abundantly clear in a state like Texas, where women and other people seeking abortion must wait 24 hours, undergo coercive counseling and have their ultrasounds described to them in detail before they can make a decision about their health.

Follow the logic here and you're left with the distinct impression that the GOP believes women can sometimes be fiercely independent -- but are mostly really, really stupid.

Republicans keep fumbling in their efforts to couch their platform in the language of women's empowerment because their real motives -- and the real consequences of these policies -- are clear to anyone who is paying even the slightest bit of attention, especially women.

Women certainly are all of the things Republicans celebrate in their talking points -- smart, independent, able to make up their own minds. Which is why they know that if women in Texas -- or anywhere else in the country, really -- want to go to school while holding down a job, they'd be in a better position to do that if they made more than 77 cents on the dollar their male colleagues are making. That if they are already struggling to balance work and family life because women continue to shoulder a majority of household and caregiving responsibilities, then paid family leave and affordable childcare would go a long way. The same could be said for women who are confident that an unintended pregnancy won't mean dropping out of college, scaling back hours at work or wondering how they'll support another child.

The pseudo-feminist revolution in the GOP stands very little chance of actually persuading anyone beyond a narrow segment of white women voters to lean right, but if there's any lesson for Republicans in their quasi-empowerment scheme, it's that the women in the party really are their male colleagues' equals -- particularly when it comes to having contempt for other women's intelligence and and a disregard for their rights.