Bye, Fred Phelps! Thanks for everything!

Some are celebrating the Westboro Baptist Church leader's death, but most are showing a kindness that he never did 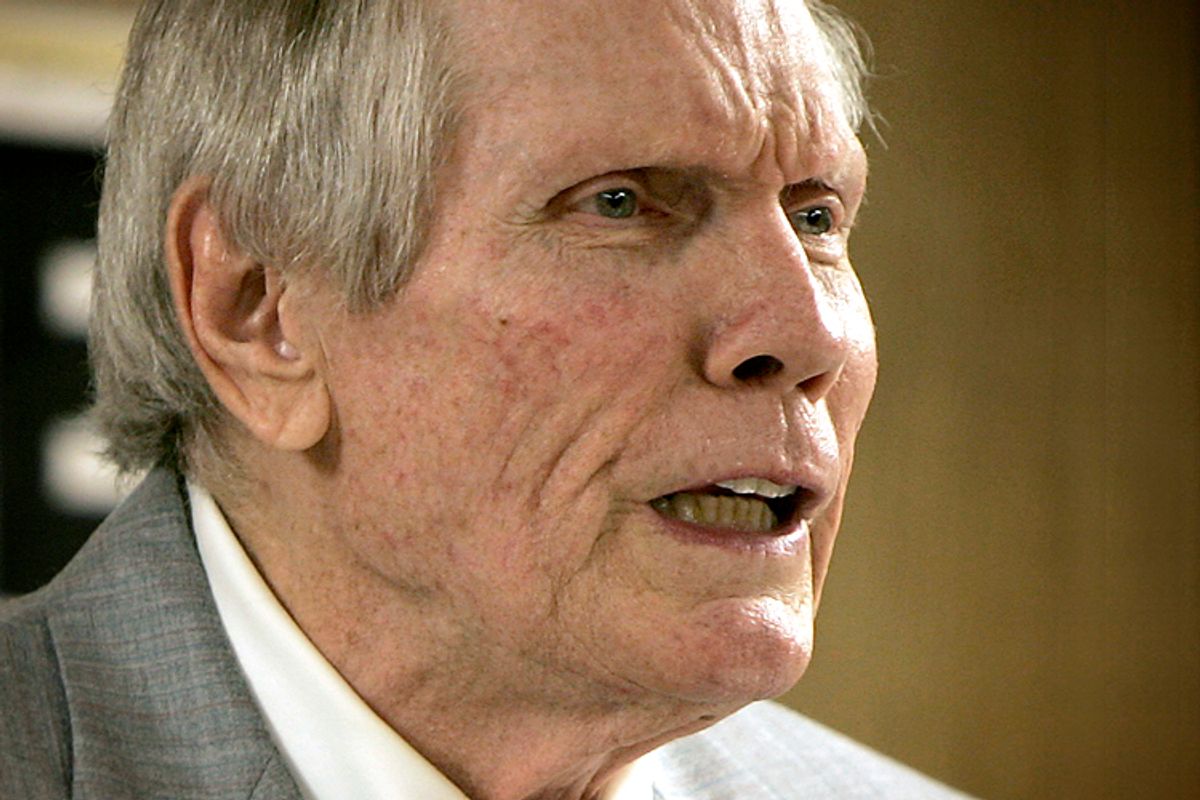 When a man like Fred Phelps dies, you expect some grave-dancing.

Indeed, it began even before the 84-year-old, famed for public protests with signs reading, "God hates fags," passed away. Upon news of his rapid decline, Brandi Lynn Wallberg, a stay-at-home mom from Wisconsin, started the Facebook page, “Fred Phelps Death Watch,” which as of this writing has more than 3,000 likes. The page is filled with lolcat images featuring the likes of Hitler and what I can only interpret as jokes about his being anally raped in Hell.

In the hours following the announcement of his death, the tone did not soften any. The page displayed an image of Phelps with the all-caps epitaph, “REST IN PISS.” There were photos of a dead Wicked Witch of the West and a Photoshopped image of Phelps being flushed down a toilet. “I'm a little sad,” read a status update. “I hardly think he suffered enough.”

The Satanic Temple has announced that it will attempt a “post-mortem homosexual conversion” on Phelps. Some tweeters were quick to enthusiastically ring the death knell. Auragasmic wrote, “Anyone have an appropriate gifset for celebrating the death of Fred Phelps? I've waited so long for this and I'm UNPREPARED.” Another suggested that Phelps “enjoy the continental breakfast” in Hell, followed my a fire emoji.

All rather understandable anger -- and an infinitesimal fraction of the hate that Phelps, founder of the Westboro Baptist Church, showed the word, even on his tamest of days.

But Phelps’ detractors -- a group including approximately everyone outside of his immediate family -- are doing in his decline what he himself could never do: surprise. The truth is that, overwhelmingly, people are responding to this cruel man’s demise with startling humanity. One, even this strident atheist, might go so far as to call it Christlike.

Earlier this week, Thomas Witt, executive director of Equality Kansas, set the tone. "This is our moment as a community to rise above the sorrow, anger, and strife he sowed, and to show the world we are caring and compassionate people who respect the privacy and dignity of all." Blogger Azariah Southworth, who once had an encounter with Westboro protesters, urged, “Let’s go all the way with the message and show love to the most unlovable person.” Sounding a similar note, Kristen Hotham Carroll wrote, "Truly, the best way to avenge hurt inflicted by our enemies is to simply forgive them, and not allow them to have a stronghold in our hearts," she wrote. "Rest in peace, Fred. I forgive you."

This, for a man who picketed with homophobic signs at the funeral of 21-year-old hate-crime victim Matthew Shepard.

Even a blog post on the Huffington Post with the headline, "Fred Phelps is dead and I'm grateful,” acknowledged, "While my desire is to celebrate, as this man was by all accounts evil and deranged, I know that celebrating his death would just be trading evil for evil."

It isn't anger that most of us feel in Phelps' death, it's pity. Actor and gay activist George Takei said in a Facebook post, "I take no solace or joy in this man's passing. We will not dance upon his grave, nor stand vigil at his funeral holding 'God Hates Freds' signs, tempting as it may be," he wrote. "He was a tormented soul, who tormented so many. Hate never wins out in the end. It instead goes always to its lonely, dusty end." Even in the snarky realm of Twitter, civility reigned. As Wolfrum wrote, "In life, Fred Phelps did nothing to make me hate. Nor will he in death."

This lack of hatred not only speaks to the integrity of his opponents but also to his utter ineffectiveness -- at least in accomplishing his own aims. Most surprising of the generous responses to his death have been the earnest expressions of thankfulness -- as E.J. Graff tweeted, "He tormented indiv families but revealed how much hate faced lgbt ppl." Matthew Shepard's mother Judy once said of Phelps, "Oh we love Freddy. If it wasn’t for him there would be no Matthew Shepard.” He made homophobic bigotry all too vividly real. Phelps was a monster the rest of the country could unite against. He did more damage to his cause than gay activists ever could.