Paul Ryan's condemnation of "inner city" values just scratches the surface. The modern GOP is fueled by such claims 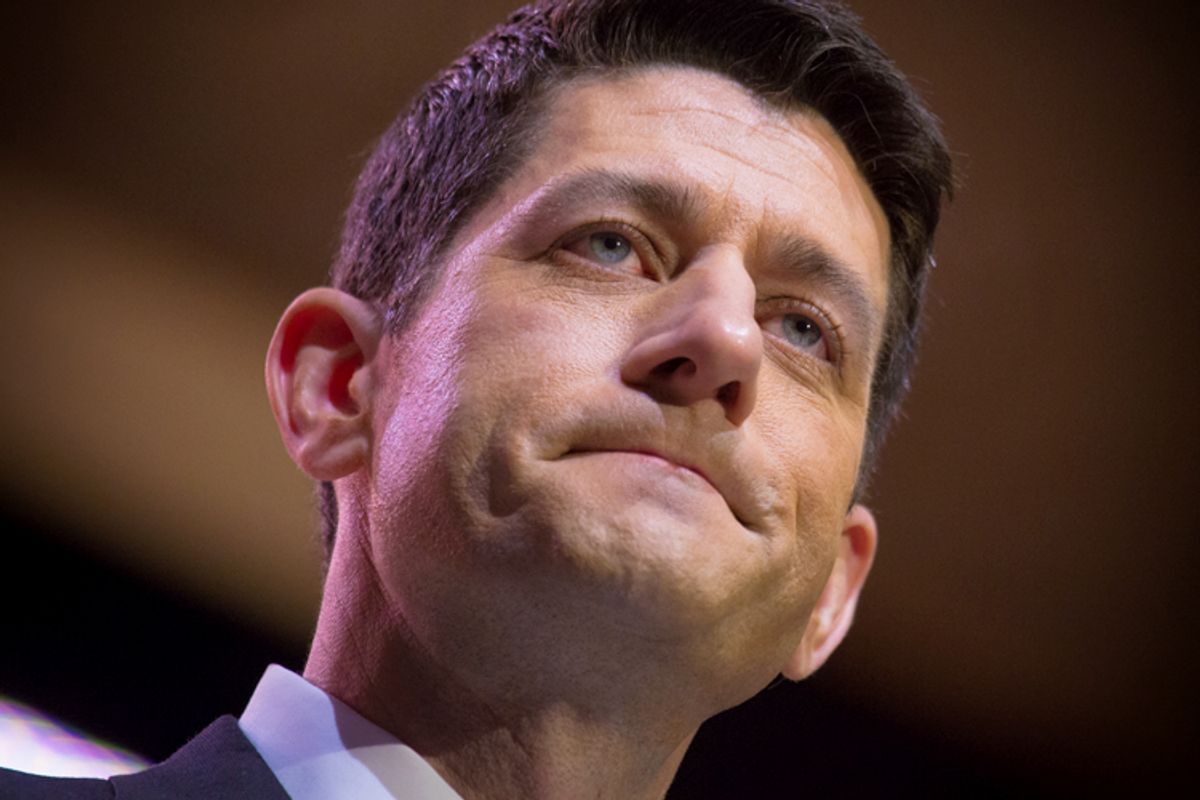 Paul Ryan has attempted to clarify  his racist argument that “inner city” black people are lazy and do not want to work. He issued a statement that:

After reading the transcript of yesterday morning’s interview, it is clear that I was inarticulate about the point I was trying to make. I was not implicating the culture of one community—but of society as a whole.

This is a false and disingenuous pseudo apology. Paul Ryan is the leader of a political party that is the country’s premier white identity organization. The Republican Party has also merged conservatism and racism in such a way that appeals to white racial resentment are its Lingua Franca and a taken for granted way of thinking about political and social reality.

Paul Ryan traffics in racism because the Republican Party is a racist organization. The calculus is not complicated.

There has been  some smart writing about Paul Ryan’s use of  coded racial appeals. However, the majority of the news media is asking the wrong question. Instead of trying to figure out “if” Paul Ryan is a racist, the more revealing question is “what type of racist is he?”

There are three basic ways to understand Paul Ryan’s racism, both as part of a pattern of behavior by Republicans, and as an example of (symbolic) white racism in the post civil rights era.

Paul Ryan’s claim that black people have “bad culture”, may be genetically defective, and do not have “normal” “middle class” values about the merits of “hard work”, is a simple channeling of legendary Republican strategist Lee Atwater’s tactics for mobilizing white voters by leveraging their hostility to black Americans.

You start out in 1954 by saying, “N—, n—, n—.” By 1968 you can’t say “n—” — that hurts you, backfires. So you say stuff like, uh, forced busing, states’ rights, and all that stuff, and you’re getting so abstract. Now, you’re talking about cutting taxes, and all these things you’re talking about are totally economic things and a byproduct of them is, blacks get hurt worse than whites.… “We want to cut this,” is much more abstract than even the busing thing, uh, and a hell of a lot more abstract than “N—, n—.”

Paul Ryan’s use of “dog whistles” and coded racial appeals to disparage and slur African-Americans exist within a social context where overt racism is a violation of public speech norms and values.

While whites still use very explicit and racist speech in the “backstage”, private spaces, or online, America’s embrace of multiculturalism and pluralism have deemed such acts anathema to “decent” people. This is especially true for a nationally known politician like Paul Ryan.

Colorblind racism inverts reality and distorts the facts. It involves denying that racism still exists as a serious social problem; black and brown people are limited in their life chances not because of institutional discrimination but because of their “bad culture” or “laziness”; white supremacy and systems of white racial advantage are dismissed as either exaggerated or non-existent; racism is reduced to mean words by white people, as opposed to systematic institutional discrimination against people of color.

The most perverse result of colorblind racism is that many white people now believe that they are “victims” of "racism", and that “anti-white racism” is a larger problem in the United States than is discrimination against black and brown Americans. Mountains of research and empirical data detail how Americans society is oriented around maintaining white privilege and white material advantages over people of color.

Colorblind racism overrides those facts by distorting white people’s (and some others’) ability to process and understand reality.

Paul Ryan’s “inner city” comment is a quintessential example of colorblind racism. He cannot plainly state that lazy black people are genetically predisposed to idleness, crime, violence, and sexual promiscuity. However, Ryan can suggest that the supposed failures of black people are really their own fault, and that all they need to do is “work hard” and have “good culture” to get ahead in America like "normal" (read: white) people.

Paul Ryan’s defenders are enabling colorblind racism by trafficking in its other distortion of reality: white victimology. Paul Ryan is portrayed as a victim of political correctness. Black conservatives such as Ron Christie claim that Ryan is a “truth-teller”. Ryan will tell interviewers that he is just misunderstood and is being unfairly criticized.

Once more, colorblind racism protects white people from the consequences of their racist behavior by transforming them into “victims”.

Paul Ryan’s faux apology emphasized his intent, and how he was “inarticulate” in his claim that black people are lazy and have bad genes.

The historical record suggests otherwise: whiteness was born of violence towards people of color. Whiteness works and is made real through many lies both small and large.

Paul Ryan, like other racists, will deploy the common phrase “I didn’t mean it that way” or “that was not my intention”.

By contrast, the twin facts of white privilege and white racism are not dependent on intent.

The racist cannot tell the victim of the former’s racism how and if they should be offended.

Moreover, Paul Ryan’s claim to have made a mistake will be granted because he is white and male. The errors of prominent (as well as rank and file) African-Americans for example, are never excused away or viewed as aberrations or outliers. No. When black folks are “inarticulate” or “misspeak” the white racial frame deems such moments as indications of incompetence, or proof that people of color are somehow “not qualified” or as “intelligent” as white people.

The white gaze does not view black Americans as individuals. When a black person makes a mistake it becomes the focus of a “national conversation” about the black community, one in which “black leaders” are forced to publicly explain and condemn the actions of other black people. There is not an equivalent ritual for white people. White conservatives and the white community will not be forced to condemn Paul Ryan. Nor will white people be held publicly accountable for Paul Ryan’s and the Republican Party’s racism.

Whiteness deems that Paul Ryan is a “racial innocent”, an “individual”, and that he should be treated as such.

Paul Ryan and other movement conservatives are racial political arsonists. Ryan’s racist claims about lazy black people with bad genes are a function of a willful political strategy and determined worldview. They are not exceptions, outliers, or bizarre happenings.

Paul Ryan and other conservatives can claim that they are innocent of their racist political arson. But, they are repeatedly caught, hiding behind the dumpster, or in the bushes, as the building burns. The hand is concealing a lighter. The police approach, shake their heads, and say “you again!”

Paul Ryan and his fellow racial political arsonists in the Republican Party apologize, flummoxed, and indignant with the police that “you have the wrong guy!”

The police will just slap his wrist and say “don’t do it again”. Why? Because Paul Ryan and other racial political arsonists in the Republican Party are really decent people who are just misunderstood.