"We’re doing worse than anyone could have imagined": Paul Krugman says the "good guys" must fight the "pain caucuses"

People have started to accept our terrible economic situation as the "new normal." That has to change, Krugman says 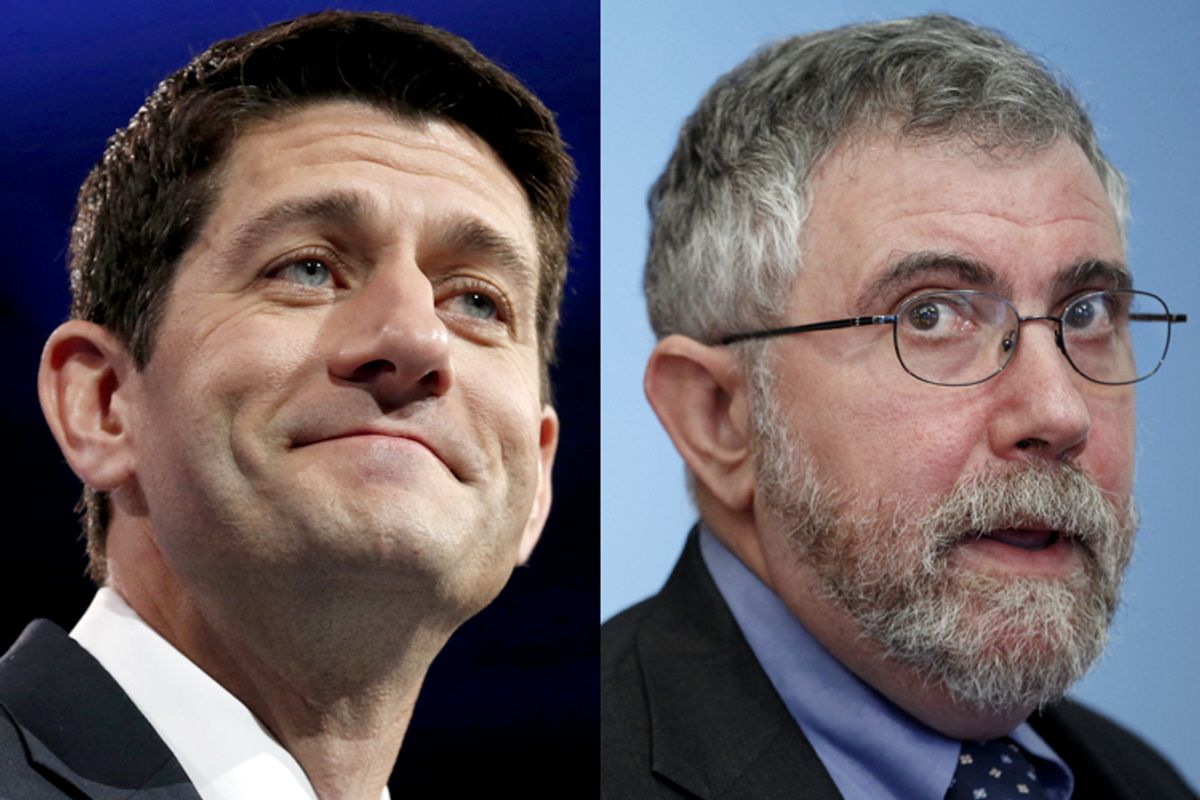 There may not be "any major economic crises underway right this moment," but that doesn't mean we're not stuck in the middle of a "miserable" economic situation, writes New York Times columnist Paul Krugman.

So dire is our current situation that even paltry economic news -- like 1 percent growth in Spain's depressed economy with 55 percent youth unemployment -- is celebrated as a major triumph. "We’re doing worse than anyone could have imagined a few years ago," Krugman notes in his Friday column, but people have started to accept terrible economic conditions as the new normal:

How did this happen? ... I’d argue that an important source of failure was what I’ve taken to calling the timidity trap -- the consistent tendency of policy makers who have the right ideas in principle to go for half-measures in practice, and the way this timidity ends up backfiring, politically and even economically.

In other words, Yeats had it right: the best lack all conviction, while the worst are full of passionate intensity.

What this has meant in the United States and elsewhere, Krugman argues, is that the "good guys" who want to implement policies to get the unemployed back to work are too often caving to the pressure of the "pain caucuses" pushing sky-is-falling predictions about "runaway inflation and soaring interest rates" as a justification to do nothing.

It's a battle of good versus evil, Krugman says -- and the bad guys seem to be winning:

For there are good guys out there, people who haven’t bought into the notion that nothing can or should be done about mass unemployment. The Obama administration’s heart — or, at any rate, its economic model — is in the right place. The Federal Reserve has pushed back against the springtime-for-Weimar, inflation-is-coming crowd. The International Monetary Fund has put out research debunking claims that austerity is painless. But these good guys never seem willing to go all-in on their beliefs.

The classic example is the Obama stimulus, which was obviously underpowered given the economy’s dire straits. That’s not 20/20 hindsight. Some of us warned right from the beginning that the plan would be inadequate — and that because it was being oversold, the persistence of high unemployment would end up discrediting the whole idea of stimulus in the public mind. And so it proved.

What’s not as well known is that the Fed has, in its own way, done the same thing. From the start, monetary officials ruled out the kinds of monetary policies most likely to work — in particular, anything that might signal a willingness to tolerate somewhat higher inflation, at least temporarily. As a result, the policies they have followed have fallen short of hopes, and ended up leaving the impression that nothing much can be done.

So why are the good guys so timid while the bad guys run the show? "I suspect that the answer has a lot to do with class interests," Krugman says. "But that will have to be a subject for another column."