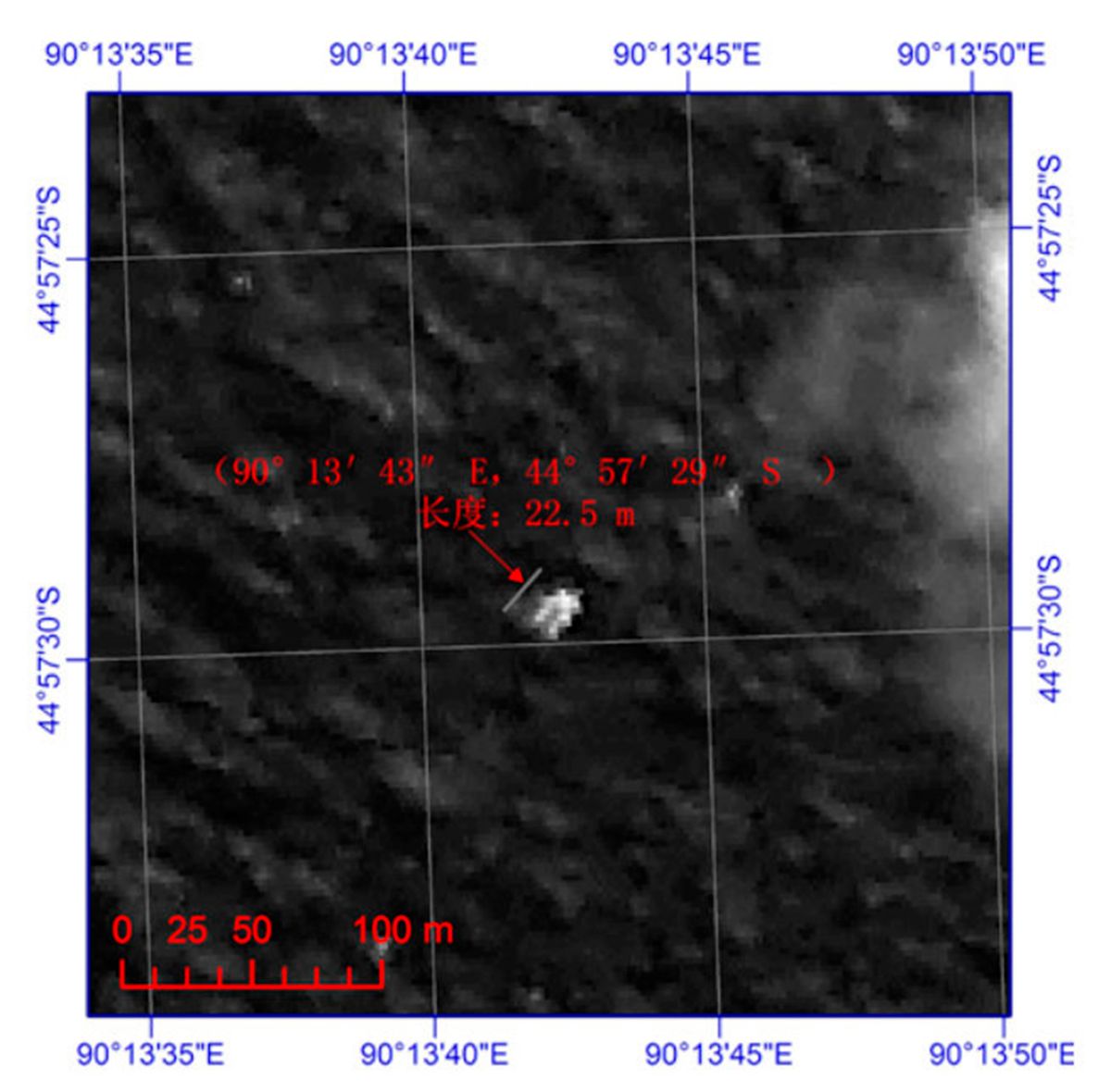 Chinese satellites have spotted the new object in the southern Indian Ocean that could be wreckage from the missing Malaysia Airlines Flight MH370 carrying 239 people, and ships are on their way to investigate. (Reuters)
--

KUALA LUMPUR, Malaysia (AP) — A satellite image released by China on Saturday offers a new sign that wreckage from a Malaysia Airlines plane lost for more than two weeks could be in a remote stretch of the southern Indian Ocean where planes and ships have been searching for three days.

China's State Administration of Science, Technology and Industry for National Defense said on its website that a Chinese satellite took an image of an object 22 meters (72 feet) by 13 meters (43 feet) around noon Tuesday. The image location was about 120 kilometers (75 miles) south of where an Australian satellite viewed two objects two days earlier. The larger object was about as long as the one the Chinese satellite detected.

"The news that I just received is that the Chinese ambassador received a satellite image of a floating object in the southern corridor and they will be sending ships to verify," Malaysian Defense Minister Hishammuddin Hussein told reporters Saturday said.

The latest image is another clue in a baffling search for Flight 370, which went missing March 8 shortly after leaving Kuala Lumpur en route to Beijing with 239 people on board.

After about a week of confusion, authorities said pings sent by the Boeing 777 for several hours after it disappeared from air traffic control screens indicated that the plane ended up in one of two huge arcs: a northern corridor stretching from Malaysia up to Central Asia, or a southern corridor that stretches in an arch toward Antarctica.

The discovery of the two objects by the Australian satellite led several countries to send planes and ships to the area, about 2,500 kilometers (1,550 miles) southwest of Australia. One of the objects spotted in the earlier satellite imagery was described as 24 meters (almost 80 feet) in length and the other was 5 meters (15 feet). But three days of searching have produced nothing.

Two military planes from China arrived Saturday in Perth to join Australian, New Zealand and U.S. aircraft in the search. Japanese planes will arrive Sunday and ships were in the area or on their way.

The flights Saturday in relatively good weather also did not yield any results, and it was not immediately known if the newly released Chinese satellite image would change the search area on Sunday.

Even if both satellites detected the same object, it may be unrelated to the plane. One possibility is that it could have fallen off a cargo vessel.

Erik van Sebille, an oceanographer at the University of New South Wales in Sydney, said the currents in the area typically move at about one meter (yard) per second although can sometimes move faster.

Based on the typical speed, a current could theoretically move a floating object about 173 kilometers (107 miles) in two days.

Warren Truss, Australia's acting prime minister while Tony Abbott is abroad, said before the new satellite data was announced that a complete search could take a long time.

"It is a very remote area, but we intend to continue the search until we're absolutely satisfied that further searching would be futile — and that day is not in sight," he said.

"If there's something there to be found, I'm confident that this search effort will locate it," Truss said from the base near Perth that is serving as a staging area for search aircraft.

But because the search area is a four-hour flight from land, the Orions can search for about only two hours before they must fly back. The commercial jets can stay for five hours before heading back to the base.

Two merchant ships were in the area, and the HMAS Success, a navy supply ship, had also joined the search.

The Chinese planes that arrived in Perth on Saturday were expected to begin searching on Sunday. A small flotilla of ships from China will also join the hunt, along with a refueling vessel that will allow ships to stay in the search area for a long time, Truss said.

The missing plane, which had been bound for Beijing, carried 153 Chinese. In the Chinese capital on Saturday, relatives of the passengers rose up in anger at the end of a brief meeting with Malaysia Airlines and Malaysian government officials.

"You can't leave here! We want to know what the reality is!" they shouted in frustration over what they saw as officials' refusal to answer questions. The relatives gave reporters a statement saying they believe they have been "strung along, kept in the dark and lied to by the Malaysian government."

Malaysian authorities have not ruled out any possible explanation for what happened to the jet but have said the evidence so far suggests it was deliberately turned back across Malaysia to the Strait of Malacca, with its communications systems disabled. They are unsure what happened next.

Police are considering the possibilities of hijacking, sabotage, terrorism or issues related to the mental health of the pilots or anyone else on board.

Malaysia asked the U.S. for undersea surveillance equipment to help in the search, said Rear Adm. John Kirby, a Pentagon spokesman. Defense Secretary Chuck Hagel promised to assess the availability of the technology and its usefulness in the search, Kirby said. The Pentagon says it has spent $2.5 million to operate ships and aircraft in the search and has budgeted another $1.5 million for the efforts.