"The Age of Radiance": The epic story of the Atomic Age 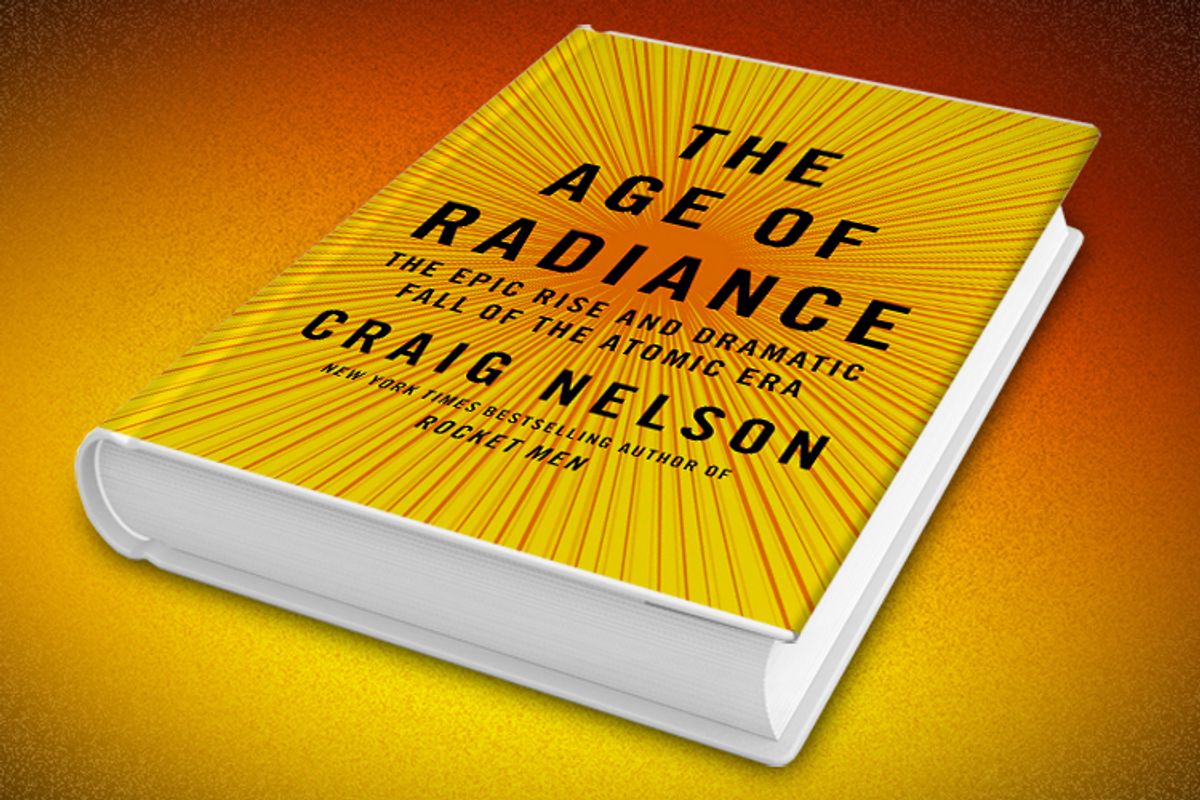 A short video, released earlier this month, in which the actor Kevin Bacon presumes to lecture "millennials" on everything they don't understand about the 1980s, is mostly a limp affair, with Bacon moaning about the hardship of having to phone a girl for a date instead of pinging her on "OK Twinder." But the clip does touch upon an epochal difference between the past century and this one when Bacon informs his viewers that if they think Russia is a problem now, "Lemme tell you about a little thing called the Cold War. They had nukes pointed at us for 20 years." That pronouncement soon gets lost in more lame jokes about skateboarding kids getting "nuked," but: point taken. No one has grown up under a Sword of Damocles bigger or sharper than that one. Neither the threat of international terrorism nor the menace of global warming can quite measure up to a nasty little thing we used to call MAD: Mutually Assured Destruction.

It was a 20th-century madness and malaise, but also the 20th century's glory, and historian Craig Nelson tells the tale with exceptional panache in "The Age of Radiance: The Epic Rise and Dramatic Fall of the Atomic Era." Because Nelson's purview in this book encompasses both nuclear power and nuclear weapons, the story isn't really over yet, even if the 2011 Fukushima Daiichi meltdown prompted more than 17 nations to begin phasing out their nuclear power plants. Nelson characterizes humanity's harnessing of the atom as a "blessed curse," one that has taken many lives and (in the form of medical technologies) has saved others. And he concludes by pointing out that many leading environmentalists have now come to embrace (well-regulated) nuclear power as the only currently viable solution to the modern world's voracious energy demands.

Mostly, though, "The Age of Radiance" is an example of top-notch storytelling. The earliest chapters are the most focused and effective, as Nelson traces the winding routes of several brilliant scientists from Europe to the isolated community of Los Alamos, N.M., in the early 1940s. This is far from the first time this narrative has been told, but Nelson's version is one of the best, an ideal balance of detail, character, conflict and information. "The Age of Radiance" is unlikely to help a complete novice understand the workings of nuclear science, but that's not the book's purpose. It will, however, give readers a vivid picture of the apparatus around the science, from the bare-bones suburb erected to house the families of the Manhattan Project's staff to the winches and trestles and rods and massive graphite bricks used to build the world's first nuclear reactor in a decommissioned squash court at the University of Chicago in 1942, to the distinctive (and according to Russian physicist Andrei Sakharov, quite pleasant) smell of a nuclear explosion: ozone, "fresh, clean and electric, like the air of great natural hydrodynamics, of Angel, of Niagara, of Victoria."

And then there are the characters. There's the outwardly dour but inwardly passionate Marie Curie, discoverer of radioactivity. There's the winning Enrico Fermi and his off-and-on partner/nemesis, the iconoclastic Leo Szilard, visionary physicists from Italy and Hungary, respectively, with diametrically opposed styles of pursuing the truth about the essence of matter. J. Robert Oppenheimer, who oversaw the Manhattan Project, is less emphasized here than in some other accounts of the building of the bomb, where he is often cast as a Faustian figure embodying an entire civilization's torment at what it has wrought. And in counterpoint to all the eggheads, there is Lt. Gen. Leslie Richard Groves, the notoriously choleric wrangler of the project, who told his officers, "At great expense, we have gathered on this mesa the largest collection of crackpots ever seen." It took the awe-inspiring spectacle of the test detonation of Trinity, the first atomic bomb, in the New Mexico desert to change his tune: "Groves, grumbling as ever: 'Well, there must be something in nucleonics after all.'"

And after that success, of course, the horror set in for everyone involved in creating the bomb. Well, almost everyone, because this story has an antagonist as well, one to rival Iago or Loki, in the person of superhawk Edward Teller, one-fourth of the celebrated "Hungarian Quartet" of physicists who emerged in Budapest between the wars. Nelson gives us Teller at Los Alamos, obsessing about a pet project called "the Super" (a proposed weapon that would eventually become the hydrogen bomb) and refusing to do much of the work for which he was hired, forcing his colleagues to bring in some British scientists, including Klaus Fuchs, a Soviet agent. (The security-mad Groves always believed, in complete error, that Szilard was the commie spy.) Then, years later, Teller, the inspiration for Kubrick's Dr. Strangelove, whispering of the Strategic Defense Initiative into the ear of Ronald Reagan, whose understanding of the threat of nuclear weapons came largely from a TV movie, "The Day After." (It was terrifying.) SDI -- aka "Star Wars," a scheme to intercept nuclear missiles in midair -- cost and continues to cost the American taxpayer billions and billions of dollars despite having no prayer of ever working.

Is it any wonder, then, that a cable network is shooting a series called "Manhattan," now that we finally have a television ecosystem capable of addressing the rending moral ambiguity of the scientists' achievement? The remainder of "The Age of Radiance" can't quite measure up to the appalling-yet-exciting drive toward the creation of the bomb; it diffuses. But as Nelson ranges outward, accounting for the victims at Hiroshima, the meltdown in Chernobyl, the demented escalation of the arms race and finally the disaster at Fukushima, his writing never thins or falters. He's always able to find the image or observation that makes a scene or situation blossom in a reader's mind's eye. And much of what he finds is surprising -- nothing more so than the news that the evacuated "Zone of Alienation" around Chernobyl has become "a wildlife sanctuary teeming with cormorants, cranes, herons and sixty-six different species of mammals," where the work of thousands of beavers has returned plowed fields to marshlands where otters, badgers and bears thrive.

"Can we ever learn to believe," Nelson writes, "that atomic bombs are just another kind of weapon, and that nuclear plants are just another form of utility, instead of imbuing each with mythic powers?" He points out that the conventional firebombing of Japanese cities, particularly Tokyo, during World War II was as lethally "genocidal" in nature as the atomic bombing of Hiroshima. He also notes that 300,000 people die every year "from infection by petrochemical effluvia," not to mention in wars launched to secure supplies of oil. But his own detailed accounts of the history of nuclear plant disasters suggests that, if anything, the people who own and operate such facilities don't treat them with sufficiently trepidatious respect. It's a great and unnatural thing that such reactors contain, after all, and every myth harbors a grain of truth.