The Hope Diet: Would the Tea Party fall for this?

Barack Obama and Bill Clinton both peddled a diet of hope. It's time for Democrats to demand more of a sure thing 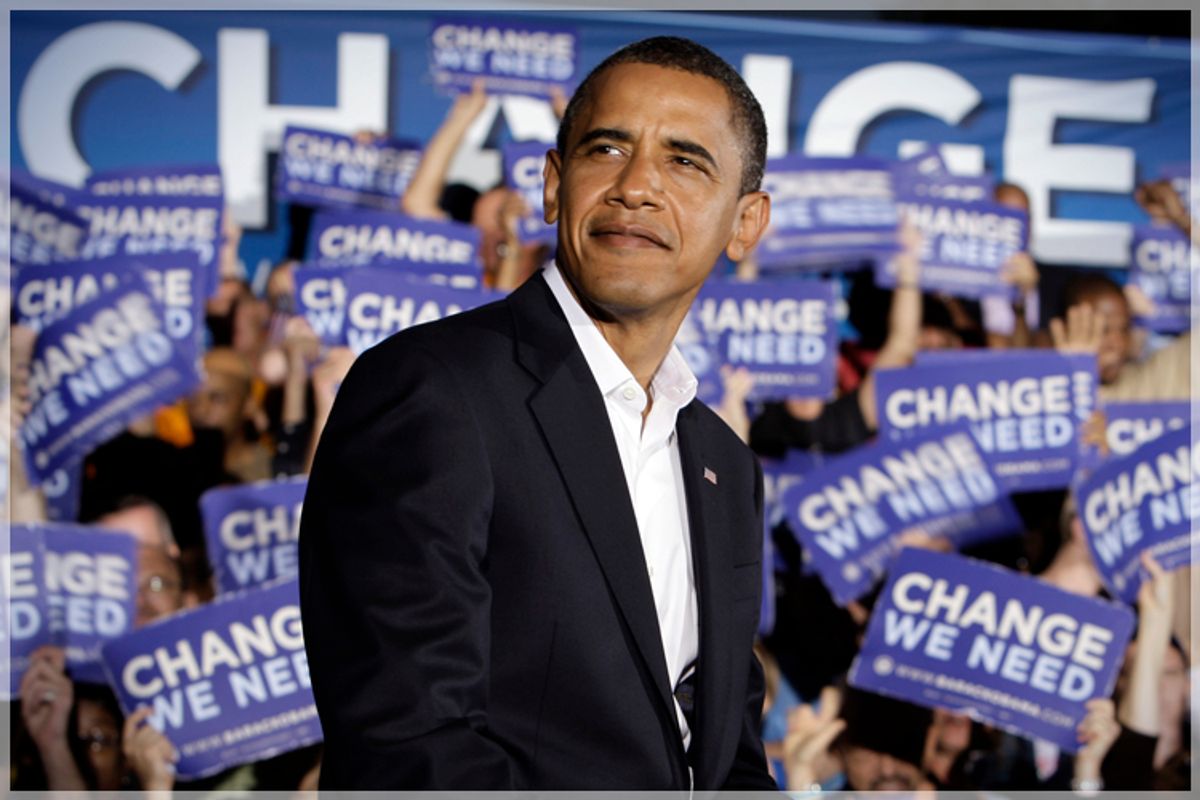 It is a peculiar coincidence that the last two Democratic presidents, men unusually anxious to compromise and capitulate, have also chosen to market themselves as homegrown philosophers. More curious still, both have presented their hard-won insights in the great American tradition of positive thinking. Like so many aphorists-on-the-make before them, Bill Clinton and Barack Obama entered the marketplace of ideas selling tidy homilies on the very same concept: Hope.

Then again, perhaps there is something more to all this than coincidence. Maybe this high-minded creed and these two presidents’ fecklessness actually complement and explain one another. Maybe “hope” is the ideal philosophical doctrine for a party determined to dump its old constituents and chart a brave new course in a marketized world. As a slogan, “hope” is vague and ethereal—as opposed to former, more earthly Democratic concepts like “shared prosperity” and “equal rights for all”—but perhaps that is what makes it the consummate brand identity for a party that so often triangulates away the concerns of its rank and file.

“Hope” is a noble word, one of the three so-called theological virtues mentioned in the Apostle Paul’s First Epistle to the Corinthians. It has a very particular meaning for Christians, who use “hope” to describe their expectation of salvation. Once upon a time it meant something similar for Marxists, too, who counted on the swift arrival of a more earthly rapture. “The driving force of revolution is—hope,” says one character to another in André Malraux’s 1937 iconic novel of the Spanish Civil War, "Man’s Hope."

What Democrats mean by the word is not quite so world-transforming. To them it is more of a personal attribute. The way Bill Clinton talked about “hope” in 1992 it was a fairly simple deal: He had it, the other guy didn’t. America under George Bush Senior was suffering a sort of hope drought, and if he, Bill Clinton, were to become president, hope would be restored to the parched fields of the Republic. The election, he said in a campaign video, was basically a hope referendum; it “presents America with a very stark choice: a choice between hope and fear.” In a video called “The Man From Hope” (Clinton was born in Hope, Ark.), which was shown at the Democratic convention, the candidate recited a hope list: He hoped he could improve himself every day, he hoped the nation would achieve togetherness, and finally he confided his hope that every American would come to love the children of America. Perhaps recognizing how vacuous all this must have sounded, Clinton proceeded to the inevitable corollary of all Democratic hope-talk: that these run-of-the-mill wishes were in fact a little bit bold. “I still believe these things are possible,” he intoned. “I still believe in the promise of America. And I still believe in a place called Hope.”

In 1996, Clinton ran on the solid record he had built as a hope-restorer. In his speech to the Democratic Convention that year, he told how he had traveled among the common people of the land and learned “that hope is back in America. We are on the right track to the 21st century.” The president also settled back into his Oval Office easy chair to take careful account of the many imaginary mysteries and fatuous syllogisms that vex the true believer in this empty concept. What he seemed to conclude, to judge by his campaign book for that year, "Between Hope and History," was that hope was the opposite of everything that was bad, particularly “fear” but also “hatred”; and that, having understood hope to be so very good, not to mention on the side of history itself, we ought to follow its dictates wherever they led us. Then he enumerated those objectives, many of which he had already achieved and others which were sure to come: Balanced budgets, NAFTA, Empowerment Zones, and telecom deregulation.

History has often presented America with the choices of hope over fear, of lofty vision over adversity. In every age, Americans are required to meet the challenges history presents us and, as we do, to keep faith with both the values upon which our nation was founded and the hopes and dreams upon which people build their lives.

Whew! After wading through 178 pages of meringue like that, the hope-talk of Barack Obama comes as a positive relief. Compared to Bill Clinton, Obama is a poet. In his hands the old platitude sings. He can spin the null concept of hope into oratory to rival Pericles.

Obama’s definition of the cherished cliche is slightly different, however. In his 2006 memoir, "The Audacity of Hope," he identified “hope” as a sort of absence of cynicism, a belief that government can do good in the world. He often elaborated on this uninteresting view in his electrifying campaign speeches. In one memorable 2008 appearance before a throng of the faithful in Rhode Island, he defined hope as “That sense that we can make America better.” “Nothing worthwhile in this country’s ever happened,” he continued, “except somebody, somewhere was willing to hope.”

But the maneuvers for which Obama are deservedly famous are the leaps and spins he executed in hope’s backfield. He not only genuflected before the beloved banality, he pretended it took “audacity” to do so, even going so far as to imagine himself beleaguered by cynics for daring to hope. He liked to introduce his famous description of himself as a “hope-monger,” for example, by claiming the phrase was a slight directed at him by Beltway media types, which he would now wear as a badge of honor. Yes, he would stand up for hope regardless of how the highbrows sneered at it.

So why sneer, in my highbrow way? Why not let the Democrats think their positive, boring thoughts? Politicians always speak in platitudes, after all. Why not let them waste their time pondering the subtleties of “hope”?

Because this particular platitude is not harmless. After watching Clinton and Obama theorize on the virtue I concluded it is positively injurious. To describe politics in terms of “hope” fundamentally misrepresents the situation we are in, and by misrepresenting, gets the Democrats off the hook time and again. It is hope that allows them to sell us out over and over.

I say this because our relationship with elected officials, here in the 21st century, shouldn’t really be a matter of hope. When a young person with lousy life chances thinks of his future as a kind of lottery, that is the appropriate terrain for hope. Tell the young to read "Think and Grow Rich," and to buy a scratch ticket while they’re at it. Why not?

But with politics it’s different: We form groups, we strategize, we donate, we plan how to best advance our collective interests. This is not the lottery. When we elect public servants, the deal ought to be a little more of a sure thing.

Recall, in this connection, one of the most annoying invocations of “hope” ever to cross a politician’s lips, John Edwards’ vice presidential acceptance speech at the 2004 Democratic Convention. His tag line, which he repeated many times: “Hope is on the way.” Not “help,” mind you; “hope.” Edwards had lots of good, practical ideas, but this phrase rubbed me the wrong way. What it seemed to suggest was not that the candidate was actually going to do something for the suffering, hard-working people he described, but that, by the strength of his presence, he was going to give people a chance that someone might do something for them. We give him the vice presidency, he gives us a Powerball ticket.

"Hope" also sets an extremely low standard for judging Democratic politicians. Hope is, by their definition, something they bring with them, or a place they come from, or a poster they are (literally!) the illustration for; ensuring that this fanciful substance flows our way doesn’t require them actually to, you know, enact anything we’re hoping for. On the contrary, they can do things (like Clinton’s deregulations or Obama’s spying program) that actually harm their constituents, and then tell us, as Barack Obama tweeted after the 2012 election, “The definition of hope is you still believe, even when it’s hard.”

This is the opposite of accountability. It means, just keep waiting, and just keep voting. If you think good thoughts long enough, maybe someday you’ll get that million bucks, or that single-payer healthcare system.

And that’s probably why this stuff springs so goddamned eternal. After 30 years of these pseudo Democrats—Democrats who fundraise like Republicans, Democrats who govern like Republicans, Democrats who basically become Republicans (for example, Zell Miller, the creator of the “HOPE Scholarship”)—it’s easy enough to understand why elected officials love the concept. “Hope” means, forget about how you got taken last time. Think positively. Maybe this next Democrat is the one who will finally act the way you think Democrats ought to act. And when he doesn’t, “hope” means you need to stick with him anyway, because . . . well, because he’s the one who carries hope in his back pocket and all.

At any rate, “hope” is a virtue they mainly recommend for you, the Democratic voter; with their funders and bundlers, the relationship is a little more contractual. For them our Democratic leaders undertake to perform certain actions; it is only for the rank and file that they recommend a diet of wishes. If we complain about this state of affairs, they will no doubt tell us that results in this material world aren’t everything. There’s something philosophical and ennobling about hoping for things. “Though he slay me, yet will I hope in him,” says Job of the Almighty.

When confronting our earthly leaders, however, the situation ought to be a little different. We shouldn’t have to hope. We should expect politicians to deliver.