Welcome to the dead zone: Our planet's greatest cities are facing a major pollution crisis 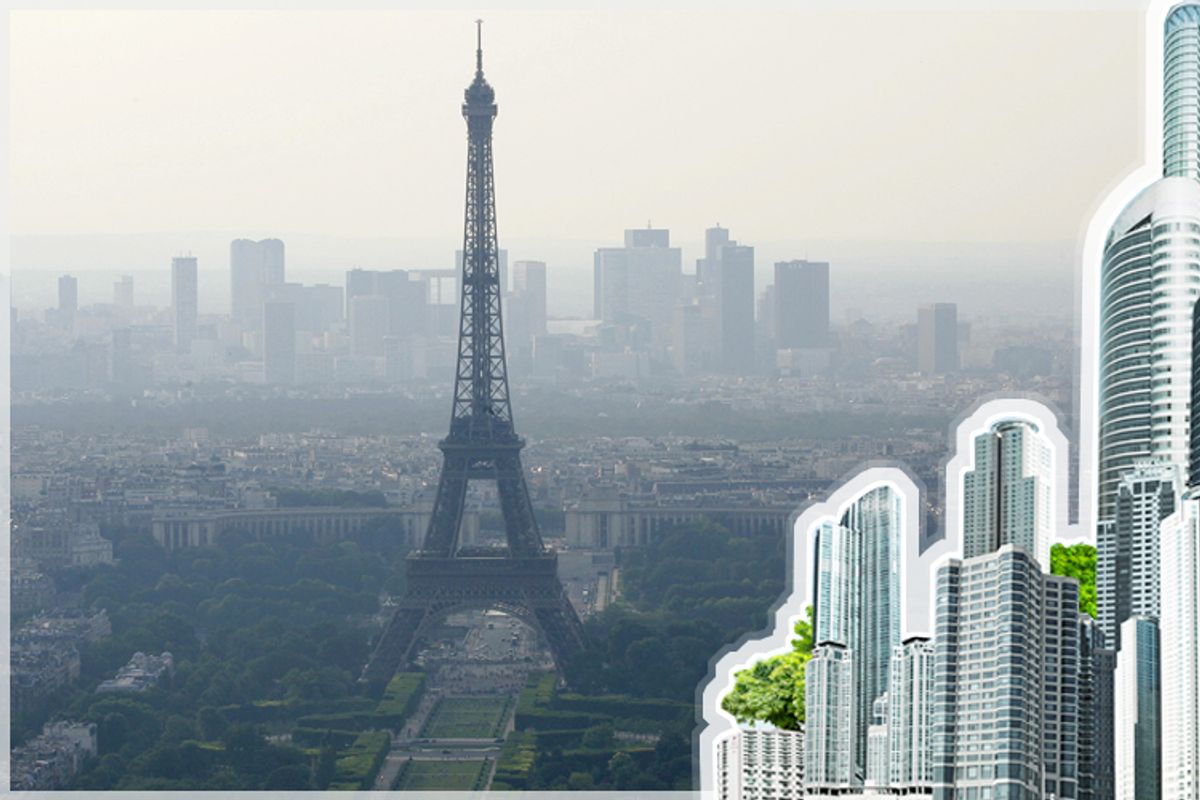 Last week, Paris and Beijing had one of those feuds that city-watchers love so much. (Such head-to-head battles, like great inter-urban sporting events, fuel the illusion that cities are singular, indivisible, cultural entities.) In this case, it was a race to the bottom: Observers noticed, during the five-day air quality crisis in Paris last week, that there was more particulate matter in the Parisian atmosphere than in Beijing.

This was true, for a moment, but the comparison soon backfired on certain gleeful Chinese media outlets. When the proper way to explain the hazardousness of the air is by saying it’s “worse than Beijing,” nobody has anything to brag about. Last weekend marked the worst air quality crisis in Paris in two decades, during which the air quality index (AQI) – which measures ozone, several poisonous gases, and particle pollution – reached the 180s, more than twice the recommended limits for human health. Yet it doesn’t hold a candle to the 500+ readings recorded in Beijing in January 2013.

Parisians say they are coughing and wheezing; and Beijing has been described by a government think tank as “unfit for human habitation.” But both cities can breathe easy, at least metaphorically speaking. According to the Urban Outdoor Air Pollution Database, published by the World Health Organization, all but two of the 20 worst cities for coarse-particle pollution are in India, Pakistan and Iran. Rounding out the list are Ulaanbataar, in Mongolia, and Gaborone, Botswana. Beijing, with an average PM10 content of 121, is barely in the top 50. Paris’ average annual coarse particle pollution is measured at 38, hundreds of spots below.

It isn’t very instructive to compare individual cities in this regard. But a quick glance at the list reveals how thoroughly urban air pollution – which once darkened the skies in London, Pittsburgh and the Soviet Union – has become a third-world epidemic. A new study estimates that Africa could account for half the world’s particle pollution by 2030.

On Monday, when Paris limited traffic to cars with plates ending in odd numbers, and bicycle commuters wrapped their faces in scarves, the capital’s PM2.5 index (measuring the smallest and most harmful elements of particular pollution) was lower than that of New Delhi. That a once-in-a-generation smog crisis in Paris is equivalent to everyday life in the Indian capital -- and makes more news -- is a lesson in the distortions of empathy.

But then, too, the crisis in Paris brought an emphatic public response from the French government. Transport was free in cities from Caen (on the English Channel) to Bordeaux (on the Atlantic coast) all weekend. For the first time since 1997, French road traffic was eased with alternate driving days, a move that AirParif, which monitors air pollution in the Paris region, says has had a noticeable effect. In Paris, the crisis has coincided with a mayoral election, in which the favored candidate seeks to phase out diesel fuel entirely. (Diesel, noxious compared to gasoline, is heavily subsidized and used by more than half of all vehicles in France.)

The concentration of smog in Paris is due to an unusually mild European winter, which has had even more destructive effects on the other side of the Channel. It may be an exceptional event; more likely it will reoccur as climate change scrambles historical environmental patterns. Last Thursday, London’s air quality index had quietly risen to 160, not far below that of Paris.

If such pollution crises recur in the West – and as they become an issue in the developing world – cities will have to choose between dangerously dirty air and extreme restrictions on industry and transportation.

There are two types of particle pollution. Coarse particles, called PM10 for their 10-micrometer diameter, include smoke, dirt, dust, mold, spores and pollen. Fine particles, called PM2.5, include toxic compounds and heavy metals. The latter, being smaller, can cause more serious damage to the lungs. They derive from automobile exhaust, power plants, heavy industry and other combustion reactions.

No city has a reputation for air pollution like Beijing. Globally circulated satellite images from December showed the eastern coast of China beneath a gray stain of smog. Last month, the concentration of PM2.5 reached 462, nearly 20 times the WHO’s recommended safe level. (It was a beautiful day compared to U.S. embassy readings from January 2013 of more than 700, which caused foreign observers to wonder if the embassy’s monitors were broken.) More than a hundred industrial companies reduced production or shut down entirely. Elsewhere in China, expressways were closed.

Pollution may now be China’s most powerful source of social unrest, inspiring 30- to 50,000 “mass incidents” a year. In February, for the first time, a Chinese man in Shijiazhuang sued the government for its failure to maintain clean air. There’s some ominous precedent for Beijing: In Czechoslovakia and other Soviet satellites, environmental protests functioned as an early and important test of government authority. The meltdown at Chernobyl forced the Soviets to very publicly confront the distressed state of their infrastructure. Among the environmental catastrophes du jour, air pollution seems to be a more volatile tinderbox than dying oceans or climate change.

It’s also an economic issue. Nearly a decade ago, the World Bank projected that China’s air pollution cost the nation 5.8 percent of its GDP through environmental damage, healthcare costs and premature deaths. Panasonic recently became the first company to announce that it would furnish executives sent to China with a kind of “danger pay” to compensate for their exposure to the dirty air.  (It’s suspected that a number of other companies currently do so, with less fanfare.) As the reaction to climate change has shown, profit margins motivate corporate action far more than any ethical qualms. Shutting down factories and roads for weeks each year is not a long-term solution.

Whether the causes are political or economic, it seems inevitable that a kind of air-pollution reckoning is coming to cities like Delhi and Dhaka. It has already started in Beijing, with promises from politicians if not quite mea culpas, and initiatives like a $5 billion tree planting program.

Like the rise of dirty industry and the growing infatuation with private automobiles, it’s a conflict with a mirror image in the history of the United States. Here, the city that exemplified the hazards of air pollution – and the possibility of recovery – was Pittsburgh. In the '40s, downtown streets had to be lamplit during the day. Neon glowed through the afternoon soot.  But an all-out campaign to reduce pollution, begun in 1947, largely succeeded in restoring the city’s sky.

But Pittsburgh, though its steel mills were world-famous, was a city of just 675,000 souls at its apex. The metropolises that will need to emulate its success are 10, 20 and 30 times larger.