Sure, they're pretty much in sync right now. But here's why Koch money, power and ideology could divide the right 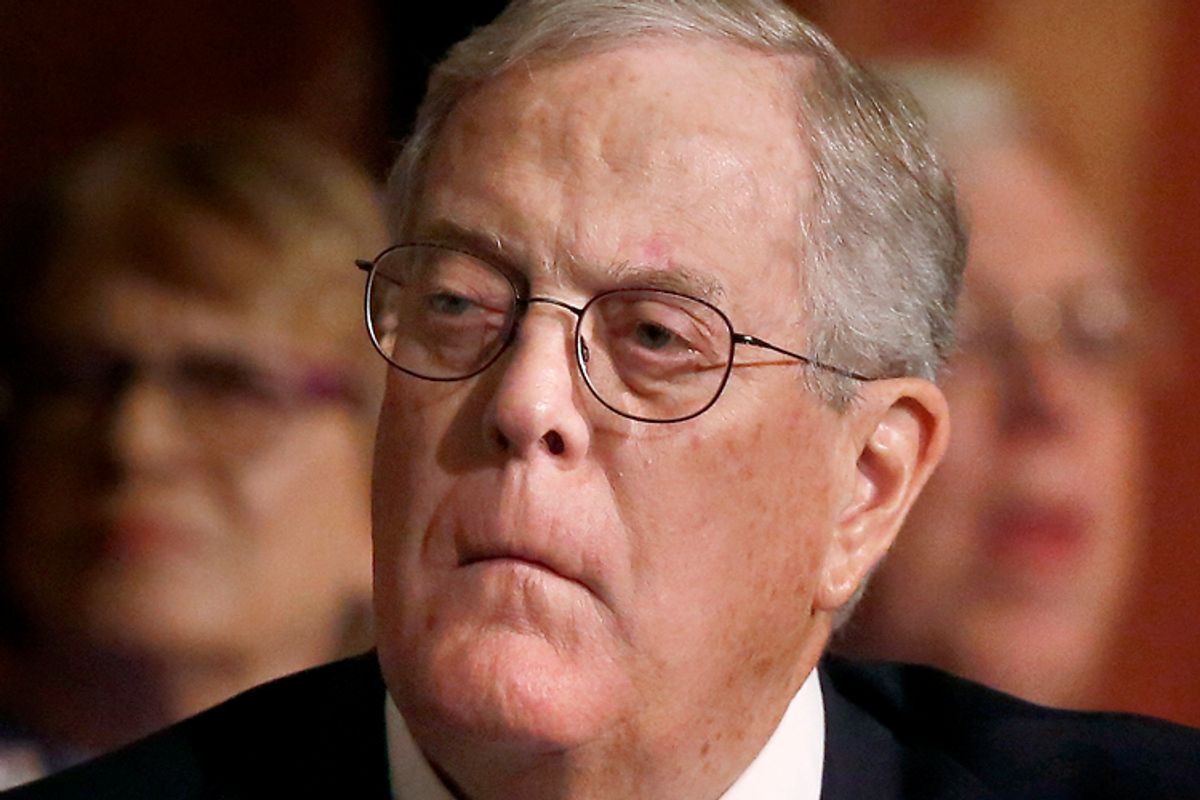 I confess to having once been agnostic toward Charles and David Koch. For quite a while, actually. To me they were the boogeymen of the left, the people liberals complained about to agitate the base, or when they had no better ammunition to fire against conservatives and Republicans. Despite countless exposés of “Koch-funded” organizations, they just didn’t seem that threatening. The Koch brothers’ most public outlet for political activism, Americans for Prosperity, was a joke. The group spent its money fighting climate change legislation by flying a 70-foot hot air balloon across the country. Hot air, climate change, zing.

I’ve since been disabused of that attitude. Americans for Prosperity has grown from a collection of sideshow balloonists to one of the heaviest-hitting political groups in the country (though you can still get a balloon ride if you want). The sprawling, multi-state operation is working to kick Democrats out of office and put together a “personal electoral laboratory to fine-tune get-out-the-vote tools and messaging for future elections as it pursues its overarching goal of convincing Americans that big government is bad government,” per the New York Times.

Now, you may be asking yourself: “Isn’t that what the Republican Party is supposed to be doing?” In a word, yes. But the Kochs are creating their own political machine. And while that’s bad news for vulnerable Senate Democrats facing down the onslaught of TV ads AFP has planned, it should also be worrying for the GOP.

The animating purpose of a party is to have control – over the influence, over the money, over the policy. And it has to have control of the agenda. That is what makes a party a party. It sets an agenda and then uses money, policy and influence to get the public on its side. Republicans have not been very successful over the past decade at selling their agenda to the public. All the while, conservatives have been left to sit and stew while the Obama agenda slowly, inexorably marches toward fruition. There’s palpable frustration from movement conservatives at the Republican establishment.

The GOP left a vacuum, and the Koch brothers are filling it by constructing a competing political operation, competing fundraising operations, and competing ideological foundations. Right now the GOP and the Koch machine are largely in sync; their political arguments are congruent (Obamacare sucks!) and they share a common enemy in Barack Obama. But what happens when their interests start diverging?

AFP campaigned hard against Obamacare’s Medicaid expansion, and as Greg Sargent pointed out, they’re going to keep fighting to make sure those states that rejected the expansion hold the line. “Critical to AFP’s agenda is to block the expansion from moving forward or succeeding wherever possible.” While AFP may be stalwart in its commitment to denying health coverage to the poor, Republican lawmakers from states that rejected the Medicaid expansion are starting to crack, reports the National Journal.

Many of the wavering lawmakers are looking to carve out compromise proposals – block grants, work requirements, etc. Could AFP and the Republicans themselves find a happy compromise by attaching conditions to the receipt of federal Medicaid funds?

It doesn’t seem likely. Arkansas was one of the few Southern states to agree to the Medicaid expansion, but it needed a bit of compromise. Gov. Mike Beebe, a Democrat, worked out a deal with the GOP-controlled Legislature to use the federal money to buy private insurance for people who would otherwise be eligible for Medicaid. They called it the “private option.” AFP called it “Medicaid expansion by another name” and concluded that “advocates for taxpayers should not expand Medicaid through the traditional expansion mechanism or through the modified private insurance model.”

As more states jump on board with the expansion, or as Republicans start making peace with the fact that Obamacare’s future is almost certainly secure, the GOP and the Koch empire are going to find themselves increasingly at odds on an issue that right now holds them together. AFP backs full repeal of Obamacare, but as more people start receiving benefits through Obamacare, full repeal becomes an increasingly untenable position, which puts pressure on Republicans to moderate.

That gets to the key philosophical difference between the Kochs and the GOP. As extreme as they often are and as infuriatingly obstructionist as Republicans can be, they are still vulnerable to prevailing public sentiment and beholden to the realities of governing. The Kochs answer only to themselves. They act according to self-interest and the interests of their tax bracket. “Leaders of the effort say it has great appeal to the businessmen and businesswomen who finance the operation and believe that excess regulation and taxation are harming their enterprises and threatening the future of the country,” the New York Times noted.

AFP has a functionally unlimited budget and no reason to alter its agenda. The Koch network is outspending everyone in its attempt to bring down big government in 2014. If it can be demonstrated that they played a key role in the Republicans’ (likely) electoral gains this year, then the money, power and ideology of the Koch brothers will stand alongside that of the Republican establishment. And if there’s one thing political parties don’t do well, it’s share power.