Quit it, conspiracy theorists: MH370 wasn't the result of a shadowy plot

While some questions remain unanswered, the simplest explanation still seems like the most plausible one 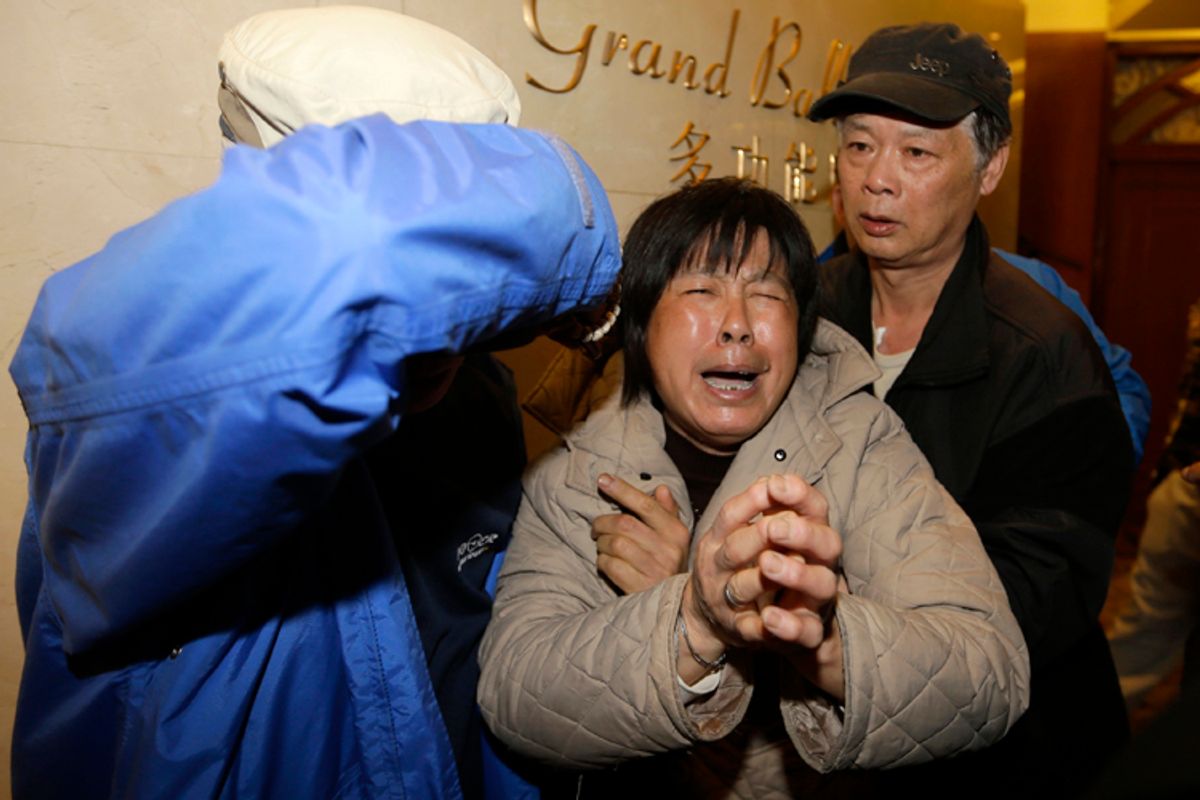 A family member of a passenger aboard Malaysia Airlines MH370 cries after watching a television broadcast of a news conference, at the Lido hotel in Beijing March 24, 2014. (Reuters/Jason Lee)
--

Is the saga of missing Malaysia Airlines Flight MH370 finally over, or did the mystery just get a little bit more confusing? Citing "a type of analysis never before used in an investigation of this sort," Malaysian Prime Minister Najib Razak announced Monday morning that "MH370 flew along the southern corridor, and that its last position was in the middle of the Indian Ocean, west of Perth."

This is a remote location, far from any possible landing sites. It is therefore with deep sadness and regret that I must inform you that, according to this new data, flight MH370 ended in the southern Indian Ocean.

Definitive, this is not -- even if we take as corroborating evidence reports of wreckage spotted in the same general region by satellite and search plane operators from France, China and Australia last week. There is still no hard evidence that the plane crashed -- although that could change soon. As these words were written, an Australian navy ship was en route to retrieve objects previously spotted by a search plane. Unmanned "Abyss" submarines are reportedly also on their way. The search for MH370 continues, at least for now. As one family member of an MH370 passenger told the Wall Street Journal, "no confirmed wreckage, so no closure."

If you are prone to conspiracy theorizing, the revelation of "a new sort" of satellite data analysis two weeks after the jetliner's disappearance is inherently suspicious -- just the kind of techno-babble you might expect from a government trying feverishly to cover up a lost plane. But if we take Prime Minister Najib's words at face value, the more compelling conclusion is that it is time to rule out the most nefarious conspiracy theories. MH370's passengers are most likely not being held hostage in Kazakhstan or some other Central Asian location. A suicide mission by MH370s pilots also makes no sense. Why fly all the way to the southern Indian ocean to crash a plane on purpose? Surely the Gulf of Thailand would have sufficed.

Once again, the simplest explanation seems to be the most plausible. Something went terribly wrong on MH370 -- some kind of fire or other malfunction. The pilots changed direction and looked for the nearest runway but were themselves overcome by the malfunction. The plane continued on its new path until it ran out of fuel, and crashed. Sometimes a horrible accident is just that -- a horrible accident.