"The Good Wife": Secrets of how Josh Charles kept that shocking twist secret!

It was the one twist no one saw coming. Except for a hint I might have gotten from a tipsy Josh Charles at a party 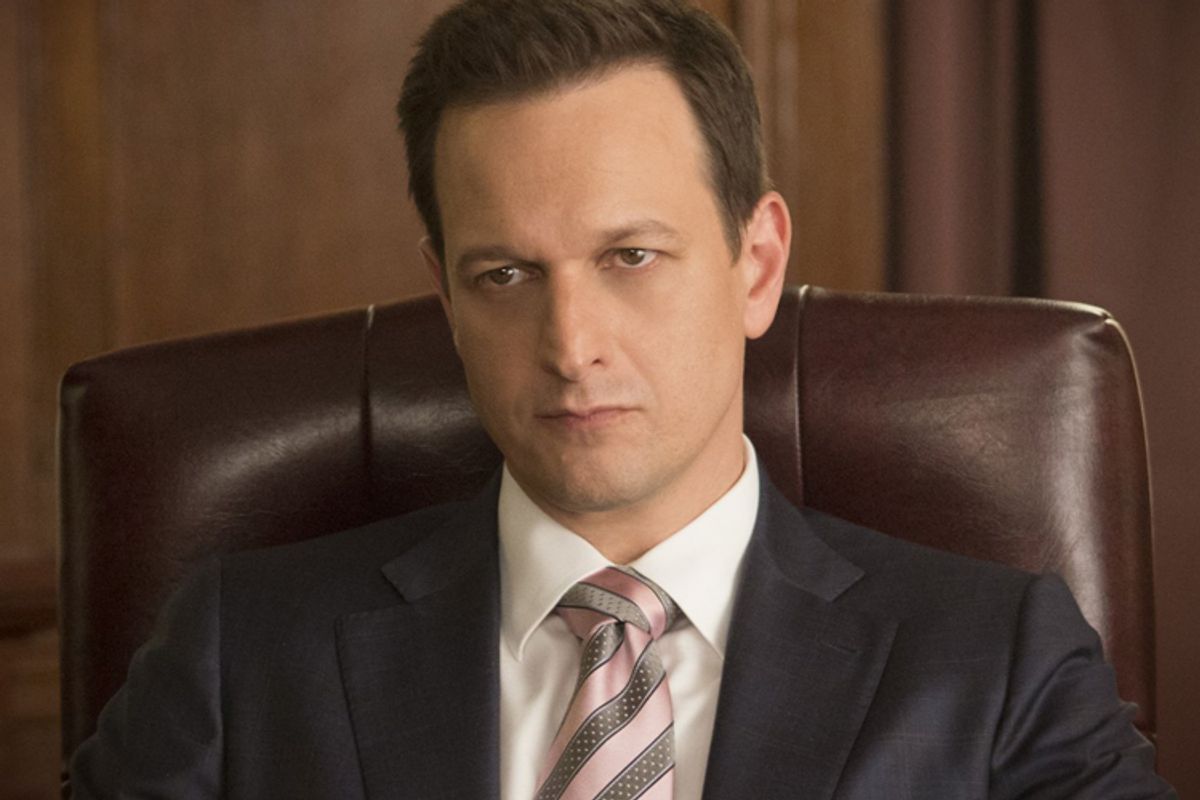 Josh Charles as Will Gardner in "The Good Wife" (CBS)
--

This story contains spoilers from last night's "The Good Wife." If you haven't seen yet, read ahead at your own risk

I met Josh Charles several months ago at a party. Tipsy, we talked about the then-current season of his show, “The Good Wife” – I was a fan of the way things were going; he mentioned he thought the pacing was a little hurried. We talked about the episodes he was directing and the challenges of editing. Newly married, he seemed quite satisfied to chop it up with me, another man, for half an hour as a reprieve from all the requests for photos he was getting from female admirers. But, when he asked me how I’d gained entry into this fairly exclusive soiree and I told him I was a guest of the DJ, an attractive brunette that I was sort of seeing at the time, he gave me a hearty pound and a drunken bear hug and said, “I knew there was a reason I liked you.”

I liked Josh Charles, too. I liked him not just because, for one night, he made me feel like a bona fide bro in the most superficial, Barney Stinson-like way possible, but for reasons that are definitely related. “The Good Wife” is, ostensibly, the story of an intelligent woman who steps from behind the shadow of a man – a powerful, rising politician – to become a relative master of the universe in her own fashion. Alicia Florrick is hardly alone in that mastery; the show is filled with similarly, if not more powerful female characters, most of whom gleefully flout any number of traditional gender roles on a weekly basis.

Charles and I obviously didn’t get as close as I’d thought that night, for he neglected to mention that he was planning to exit the show. Last night, in what is typically and tediously labeled a “shocking twist,” his character, Will Gardner, was rather dramatically killed off in a manner that had apparently been in the – pun intended – offing for months. In a timely interview with TV Line (sly Ausiello!), “Good Wife” co-creator Robert King was asked about the even more timely arrival of handsome actor Matthew Goode on the occasion of Charles’ departure.

TVLINE | Was Matthew brought in specifically to fill the Will void?

Yes, Will Gardner had his sensitive moments. For the uninitiated viewer who only managed to tune in when Gardner was squandering billable hours pining over Alicia, it might have seemed that their doomed passion was the motivating force in his life. But Will Gardner was a shark, a bastard in the courtroom and out, a less monstrous, network Don Draper. His past was murky, his methods questionable. His ego and ambitions, if not boundless, certainly had no limits on the foreseeable horizon. And during those times when Alicia was out of reach, the ballsy lawyer was no stranger to ad hoc sexual conquest.

For five seasons, I’ve enjoyed watching Josh Charles as Lockhart/Gardner’s resident alpha male. He was alternately callous and charismatic, calculating and crusading. Not to say that the show’s women didn’t exhibit any of the same qualities. (Were one to tally up in-house investigator Kalinda Sharma’s ethical offenses – well intended or not – a jury might be convinced to bury her under the bar.) But there was something about Gardner’s m.o. that hollered young buck of the old boy's network – right down to the friendly basketball game that almost got him disbarred episodes back.

I would love for this next paragraph to begin: “And for that reason, Will Gardner had to go. His kind, a throwback in principle, needed to die off in order to make way for the empowered, well-balanced, unstoppable women who make up the true beating heart of the show.” Indeed, it seems that Alicia Florrick has absorbed all that she can from Gardner and become a cunning, if not cutthroat operator in her own right, raising a family and running her own firm with a male partner who seems to defer to her in all but official rank. Gardner's partner, Diane Lockhart, is easily the more judicious of Lockhart/Gardner’s chiefs and has steered the firm responsibly despite his recklessness and past indiscretions.

I’d like to say that Will Gardner’s bloody dispatching was an ideological inevitability, a narrative sacrifice symbolizing an era of gender equality. But as has been well reported, it was Charles’ decision to move on that forced the show runners’ collective hand into writing off such a beloved character. So, let’s just allow that, if he was going to go, he had to go like this: out in a legal blaze of glory, a proverbial gunfight to the literal death. Will Gardner didn’t just leave the firm for personal reasons or inexplicably decide to start practicing law from a bowling alley in Middle America. No, he died.

He died a warrior’s death defending a good-looking fellow bro with a bright future who – if he didn’t actually believe was innocent – he at least thought deserved a fair trial. It matters little that said defendant ended up actually murdering him. What matters is that Will Gardner died exploring every option no matter how implausible, using every diversionary tactic imaginable, duking it out with the prosecution on every front. Let’s say that Will Gardner died like a man … and then, hopefully, never have to say anything quite so boorish about this awesome show ever again.