How Russia could strangle the U.S. space program

If you use a cellphone, have a GPS system in your car, or get cash from ATMs, you should be worried 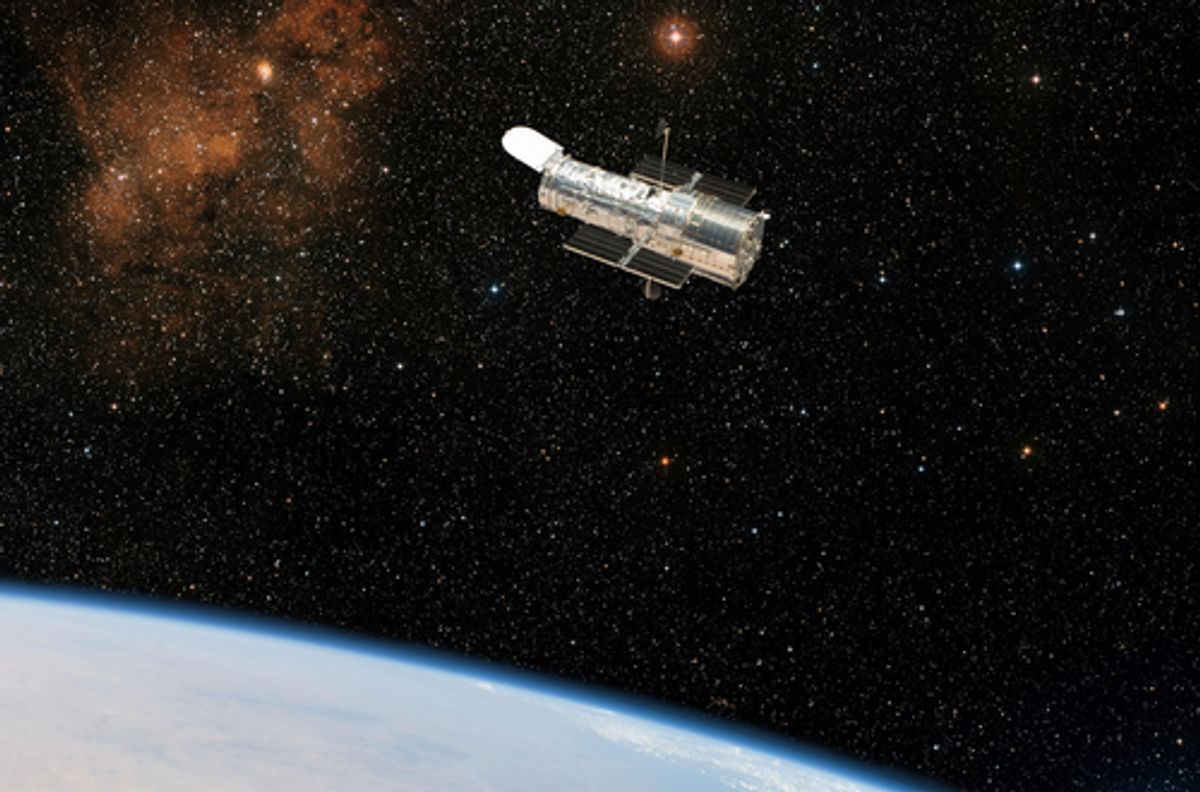 Think Russia has no way to put pressure on the United States? Think again.

The US relies heavily on Russia to furnish the engines that power rockets that deliver both military and civil payloads into space.

This includes GPS systems in cars and cellphones, and even systems that allow ATMs to function. Weather satellites are launched into space via Russian-powered rockets, and military systems such as early missile detection also depend on our friends in Moscow.

In addition, since NASA scrapped the space shuttle program in 2011, the US has to rely on Russian Soyuz capsules to get its astronauts to the space station and to bring them back home.

As the crisis over Crimea deepens and tit-for-tat sanctions go into effect, conventional wisdom has held that the US is holding all the cards. Given the relatively small amount oftrade the US conducts with Russia each year, and its pre-eminent position as the world’s largest economy, Washington has projected confidence as it moves to isolate Moscow diplomatically and economically.

But Russia is unlikely to take it lying down. As Stephen Walt, professor of international affairs at Harvard’s Kennedy School of Government, warned in a talk at Harvard recently, “They have ways of responding [to sanctions] that … we’re not going to like.”

One of the things Americans may dislike very much indeed is a possible ban on the sale of RD-180 engines to the US under a contract with Russian manufacturer NPO Energomash.

The RD-180 powers the Atlas V rocket, the main launch vehicle used to get US military and civil payloads into space.

“The Russian rocket engines are the best in the world,” said Royce Dalby, a space systems expert and managing director of Avascent, an aerospace and defense consulting firm in Washington, DC. “RD-180 provides the most efficient and least expensive means of getting our national security payloads into space.”

The dollar amounts are not great, relatively speaking: While the actual price paid for the engines is proprietary, experts estimate the cost from $11 million to $15 million per engine.

In an average year the US launches eight or nine satellites with the Atlas V.

But it gives the Russians a virtual stranglehold on the US space program, including systems vital for national security.

Over the next 24 months, according to Dalby, the Atlas V will be used to launch four classified spy satellites for the National Reconnaissance Office (NRO), one unclassified imagery satellite, two weather satellites, four GPS satellites, three military communications satellites, two classified payloads for the Air Force and one NASA science satellite.

“[Losing the RD-180] would be a blow to our national security,” said John Logsdon, the founder and long-time director of the Space Policy Institute at George Washington University. “The Atlas V is the primary vehicle we use to launch military and civil pay loads into space.”

The question of US dependence on Russian rockets has begun to worry the defense establishment as well.

Testifying at a budget hearing of the House Appropriations Committee in mid-March, Secretary of Defense Chuck Hagel indicated that the Pentagon was concerned about the RD-180 issue.

When asked by an Alabama congressman whether the crisis in Ukraine would prompt the Defense Department to move ahead with additional funding to develop domestic capabilities to manufacture rocket engines, Hagel responded that it certainly would.

“You’re obviously referring to the relationship with the Russians on the rocket motors,” the defense secretary said. “Well, I think this is going to engage us in a review of that issue. I don’t think there’s any question about that.”

But developing a domestic capability will be a long and expensive process.

United Launch Alliance (ULA), the Lockheed Martin-Boeing joint venture that manufactures the Atlas V rocket, says it has the situation well in hand.

“Atlas V will continue to provide assured access to space for our nation’s national security satellites,” the Centennial, Colo.-based company said in a written reply to questions. “ULA maintains more than a two-year supply of RD-180 engines in the United States to minimize potential supply disruptions, and has developed significant engineering and manufacturing capability which ultimately demonstrated the capability to co-produce the RD-180 domestically.”

Company spokeswoman Jessica Rye, however, acknowledged that ULA does not at present have an alternative rocket engine in the pipeline.

“We have not pursued an alternative engine,” she said. “Any new engine development would be a four-to-five year process."

The history of US-Russian cooperation on space issues goes back to the chaotic 1990s, right after the collapse of the Soviet Union. With communism in retreat, US-backed companies and organizations poured billions into helping Russia get on its feet.

In science, especially space technology, Washington was intent on keeping Russian scientists peacefully engaged, to discourage them from selling their skills elsewhere.

Besides, there was world-class technology and know-how to pick up at bargain-basement prices.

“[The Russians] had accomplished a heck of a lot in space, and we knew we could learn from their capabilities,” said Dalby, who himself worked in Moscow in the 1990s.

But times change, and the heady promise of friendship and cooperation gave way to a frostier relationship once Vladimir Putin came to power on New Year’s Day, 2000.

Russia has threatened to pull the plug on the RD-180 before.

Last August, when President Barack Obama was contemplating military action against Syria over the use of chemical weapons, Russian media reported that the government was considering a halt in the RD-180 program.

According to Dalby, this produced a near panic in the space industry.

There may be alternatives on the horizon. Elon Musk, head of SpaceX, a company looking to unseat ULA as the Air Force’s go-to rocket builder, testified before Congress in mid-March.

“In light of Russia’s de facto annexation of the Ukraine’s Crimea region and the formal severing of military ties, the Atlas V cannot possibly be described as providing ‘assured access to space‘ for our nation when supply of the main engine depends on President Putin’s permission,” Musk told the committee.

Instead, he proposed his Falcon rockets, which he said could provide high reliability at a much lower cost.

But the Falcon would not be able to do the job without extensive, and expensive, tweaking, Dalby says.

“The Falcon rocket is smaller and can’t loft most of the military payloads that the Atlas tackles,” Dalby said. “Also, satellites are designed to fly on certain rockets from the outset, and it would take years to reconfigure, if it would even be possible.”

According to George Washington University’s Logsdon, the Delta IV engine, which is produced entirely in the US, could step in, but it might have to be adjusted a bit for the task.

There is also the possibility that Pratt & Whitney, which has a joint venture with NPO Energomash, could take over production. According to Logsdon, the US contractors have access to the blueprints for the engine.

“But there is a fair degree of art as well as science here,” he said. “The Russians are extremely experienced in advanced metallurgy and design. You cannot just snap your fingers and make it happen.”

Then there is the space station — the US pays the Russians over $400 million a year to transport US astronauts there and back.

“And for that there is no alternative,” Logsdon said.

So for now the US is in a delicate balancing act — trying to combine strong censure of the Kremlin’s behavior with a cooperative relationship with Russia on space.

“For the record I still think cooperation with Russia is a good idea,” Dalby said. “The International Space Station program, especially, has been a tremendous platform for building trust and mutual understanding. Unfortunately, it can’t overshadow more terrestrial problems.”