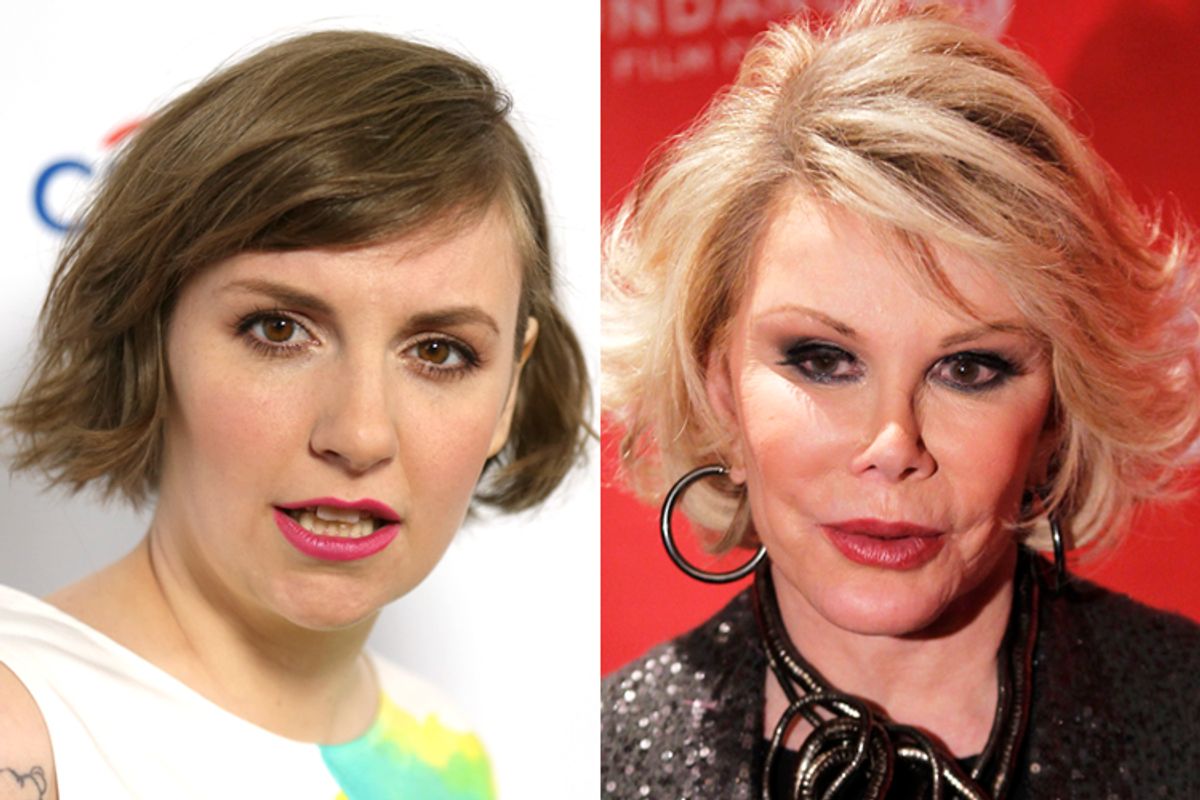 Isn't she tired at this point?

Joan Rivers has broken her silence about a young female star yet again, telling Howard Stern that "Girls" creator Lena Dunham is spreading the message that poor health is acceptable.

Dunham's nudity on "Girls" has been much-discussed throughout the show's three-season run, as has been, endlessly, her figure; for instance, the actress and writer's recent appearance on the cover of Vogue came freighted with expectations that it would be significantly airbrushed. In an interview with Stern, Rivers pushed the conversation to its bizarre endpoint, saying that Dunham is "sending a message out to people saying, ‘It’s OK! Stay fat! Get diabetes. Everybody die. Lose your fingers."

As for that Vogue cover, Rivers said: "She was on Vogue's cover looking gorgeous. You didn’t know it was her." She said Dunham shouldn't have appeared on the cover because she didn't deserve it based on her physical appearance.

This is the ultimate in concern-trolling; Rivers will certainly brush off any criticism by saying that she was just making a joke, and that everyone is fair game. But, as usual, the target of Rivers' ire is a young woman Rivers can lecture about her poor choices. (The notion that Dunham is communicating to the American public that obesity is a good choice is ... bizarre on many levels that are barely worth indulging, so I won't.) "Don’t let them laugh at you physically," Rivers tells Dunham via the Stern show, despite the fact that the elder comedian had previously appeared on "Louie," a show that makes great hay of star Louis C.K.'s weight and appearance. Besides, Dunham has previously said that when she appears nude on "Girls," she's not inviting laughter with her body but attempting to depict life as lived. If Rivers is laughing at Dunham's appearance, that's on her.

Rivers, who overcame barriers against women in comedy early in her career and went on to have plastic surgery that rendered her unrecognizable, criticizing another person's failure to conform with beauty norms is a bit painful -- there's clearly something going on here about which one can only speculate. But her pattern of lashing out specifically at younger women in the industry is so tiresome. Jessica Simpson is fat. Jennifer Lawrence is arrogant. Sofia Vergara is stupid. And none of these are really jokes in the classic sense, they're just statements of opinion.

The "Fashion Police" star is consistently described as a comedy pioneer. But what, these days, would be worse: if her critique of Dunham and others were so damning as to be actively detrimental, or if it had become such a predictable drumbeat that Rivers finds herself next to irrelevant? Dunham ought not to respond at all; why give Rivers the attention she thrives on if her jokes haven't earned it?