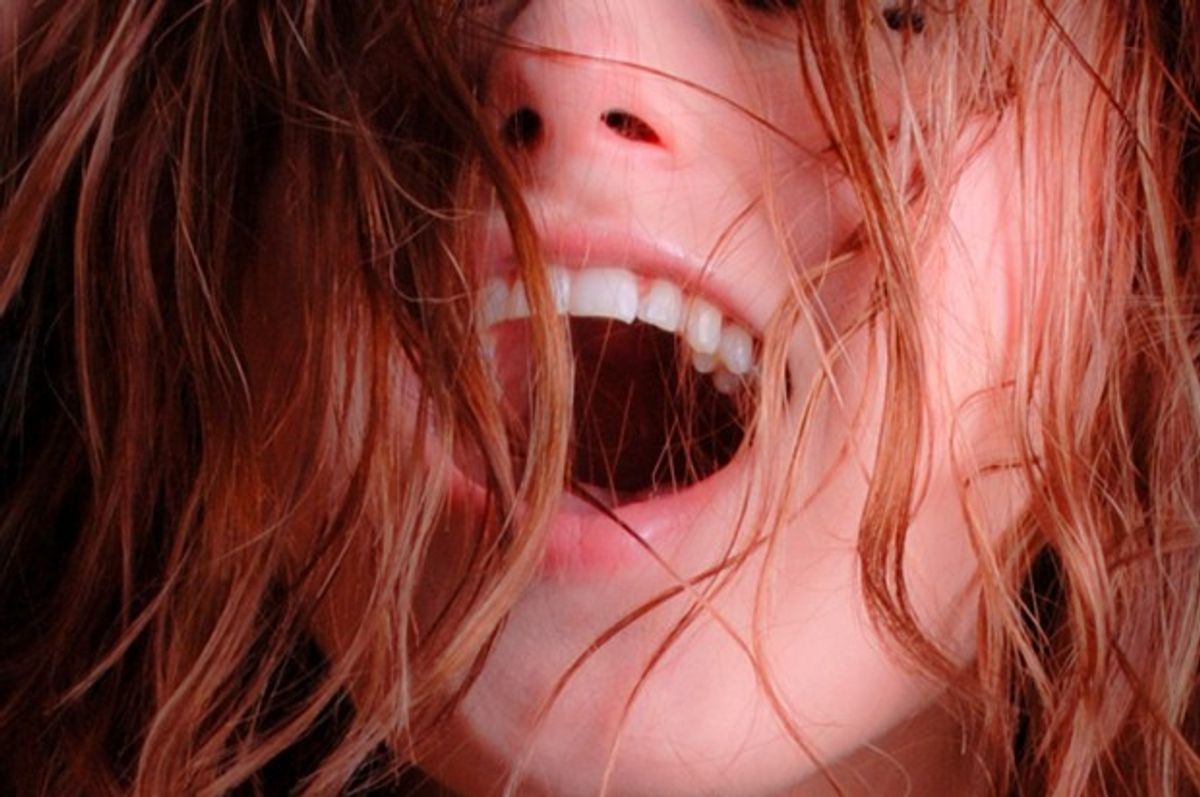 Looking for a sexual awakening? For those open to trying the latest new-age craze, orgasmic meditation may be just for you. OM, as it’s called among its followers, is a holistic practice between two people where a woman has her clitoris gently stroked for 15 minutes in a non-sexual way by a partner with a goal to building connections and prolonging therapeutic orgasms.

The stroking is said to activate the limbic system in the body ie. the emotional nervous system, releasing a flood of oxytocin—“the cuddle hormone”—which cultivates an orgasm. However, the practice is not about the destination, or reaching orgasm, but rather experiencing the journey and whatever sensation may arise. Thus, according to its founding company OneTaste, OM expands the most pleasurable part of the climax as part of a “goal-listed” practice.

“You wouldn't expect accessing your clitoris could change your life, but it does,” OneTaste New York office director Kim Howerton told AlterNet. “OM involves a sexual practice that includes pleasure at times, but it’s not a practice that is designed simply about pleasure. It’s designed for enjoyment, living a better life and having a better experience. It’s the opposite of hedonistic—more of a personal growth path, than a pleasure-seeking path,” Howerton explained.

While OM has been around for 13 years, people only recently started to sit up and take notice of the offbeat practice after founder and guru Nicole Daedone appeared on a popular TED Talk. Daedone, a former Buddhist nun-in-training with her own semi-twisted story to enlightenment, established OneTaste with a mission to teach OM to the world after being introduced to it by a random man at a party.

Following Daedone's TED appearance, OneTaste was able to get a host of celebrities on board to promote its cause. It was subsequently featured on Deepak Chopra’s 30 Days of Intent on the Chopra Well YouTube Channel, where the practice, targeted at “tired and wired women,” has been viewed over a million times. Daedone says that like Vitamin C, orgasm is a nutrient that has been missing from the standard human diet for centuries. On the scientific side of the process, OM shares a lot of the same traits as Zen Buddhism.

“Orgasm is vital for every woman and man on the planet. It roots our fundamental need for visceral, human-to-human connection. Orgasm, as experienced through OM, is a renewable, sustainable, regenerative resource creating a more complex, attentive and connected world, “ Daedone told the Chopra Well.

So how does orgasmic meditation actually work? Well, for starters, the stroking occurs in front of other people in what’s called the “nests,” which consist of yoga mats covered with blankets and scattered with pillows and organic lube. Gawker writer Nitasha Tiku attended an OM session and described what the 15-minute process entails:

"The stroker prepares for the session by massaging the subject’s legs with ‘grounding pressure,’ while the stroker’s gaze is focused on her clitoris, or at least the general area. After that is the ‘noticing’ phase, in which the stroker is supposed to narrate what’s being seen, using ‘non-value’ terms, as though a woman can listen to her vagina being described aloud without feeling judged. Then the stroker gets into position, placing his right thumb at the edge of her introitus (the opening of her vagina) and the tip of his left index finger on her clit at the 8 o’clock spot. The subject is encouraged to give ‘adjustments,’ detailing if she wants the stroker to move a little to the left or to apply less pressure... At minute 13, start winding down, so as not to be left loopy for the rest of the day.”

Similarly, OneTaste’s Howerton explained her first OM encounter to AlterNet, noting that one of the biggest misconceptions is that those trying orgasmic meditation must have sex problems.

“I wasn't someone troubled by my sex life. Mine was always fairly good,” Howerton said. “I had been in a long-term relationship and had a lot of professional success. But I was not happy in a lot of ways. I worked a lot, I had a good job, I was ambitious, I took care of my boyfriend. But little by little I was getting further into debt, eating a lot more and under considerable amounts of stress. So I heard about the practice and went to take a class. I was overweight and remember thinking, ‘Oh my God. I can’t take my pants off in front of these people. Everyone is going to be staring at me.' There’s an idea we all have that we feel we are going to be criticized or judged. But, nobody was looking at me, nobody cared. I lay down in the nest and the first thing I realized was how comfortable I felt. I remember thinking to myself, ‘Can people really live like this?’ It’s kind of awesome.”

As a result, Howerton says she ended up uncovering an inner depth about herself as a sexual being, which changed her entire life: “I lost weight, felt more energized, had better communication with my friends and boyfriend and felt better about myself. Suddenly, all of these things in my life got better. I went from feeling good to amazing and having this extremely positive outlook on the world,” she said.

Now, if you feel panicky or generally creeped out by the thought of a stranger handling your lady bits with your hooha on display for the world to see, you can relax. No one who attends an OM conference is obliged to actually participate in the stroking and a lot of people who join are couples looking to strengthen their relationships. The company also offers private classes for couples.

In addition, only the woman is permitted to remove clothing from her lower half, while her partner or stroker has to remain fully clothed. This is to ensure something called “safe porting,” where the partner must tell the woman exactly what he/she is about to do in a bid to instill a safe and connected environment.

Still not convinced? Here are some of the reactions from women in their post-stroking “sharing frames,” as The Frisky reported, which Howerton explains is a way of grounding the experience inward to re-engage your body with your brain to cap the experience.

“I think halfway through, I’m not sure, it felt like the front half of my body was being sunburnt. And there was a little soft arrow that stopped my breath.”

“There was a moment I felt my body was a shell, it was hollow, and I felt this white substance filling up from my pussy, inflating up my chest like a Michelin guy.”

“There was a moment when it felt like my whole entire body was at a low, deep, expansive vibrating hum that just kept moving out.”

At this point, you'd be forgiven for thinking OneTaste sounds a little cult-like. Over the years, the company has come under scrutiny for its OM communities and unconventional approach to female sexuality, especially since many of its employees live together in specific “OM housing” close to the San Francisco headquarters.

OneTaste’s business development manager, Marcus Ratnathicam, described the living situation to Gawker: “You come in with certain boundaries and because it gets so multi-dimensional, it starts to crack open. Friends are lovers are friends,” he said.

There are also dozens of Internet message-boards filled with users speaking out against OneTaste. Those on Yelp have been vocal, labeling the company as a “for-profit cult-like system masquerading as new-age spirituality,” while others have labeled it as “just your basic sex cult with a clever urban twist. You'll leave broke and possibly psychotic,” Refinery 29 reported.

Kim Howerton takes it all with a grain of salt: “When things involve sex or sexuality, people get a little bit wary. People have a lot of beliefs about people opening up sexuality and trying sexual practices. They get caught up in charging others in the realm of sexuality. I try to educate people. The only thing a person will pay for if they want, is to take a class. We are a community of practitioners that are just enthusiastic about what we’re offering,” she said.

In fact, OneTaste is so sure of its product it guarantees the practice on its website, boasting a wide range of health benefits including increased overall vitality, energy, libido and reduced stress and irritability.

But, be warned, it ain’t cheap. The Coaching Course costs a hefty $15,000, a Mastery Program runs $7,500 and a one-day Play Class will cost you $195. On the inexpensive side, there are OM circles and events that attract people from all demographics.

With offices all around the world and the company rapidly expanding its influence, OneTaste’s vision is that orgasmic meditation will soon lose its taboo status to the point that you will shortly hear yoga, meditation and OM in the same sentence. Daedone explains:

“I’ve been met with some skepticism. People have called my life practice “diddling".…But the challenge is that I can’t get mad at them because I too am a skeptic. I was an academic who prided myself on my ability to say no. And there was no way you ever, ever could have convinced me to try this thing. What happened was, I tried it and that convinced me. So that’s what I say to people when they come into my office. I say, just try it. I mean really, the worst thing you have to lose is 15 minutes of your life. The best thing you have to lose is that sense of hopelessness that you will never be reached, deep inside,” she said.

Here’s a sneak peek, for those who are curious: