The great Tea Party swindle: How to make lots of money off the naive 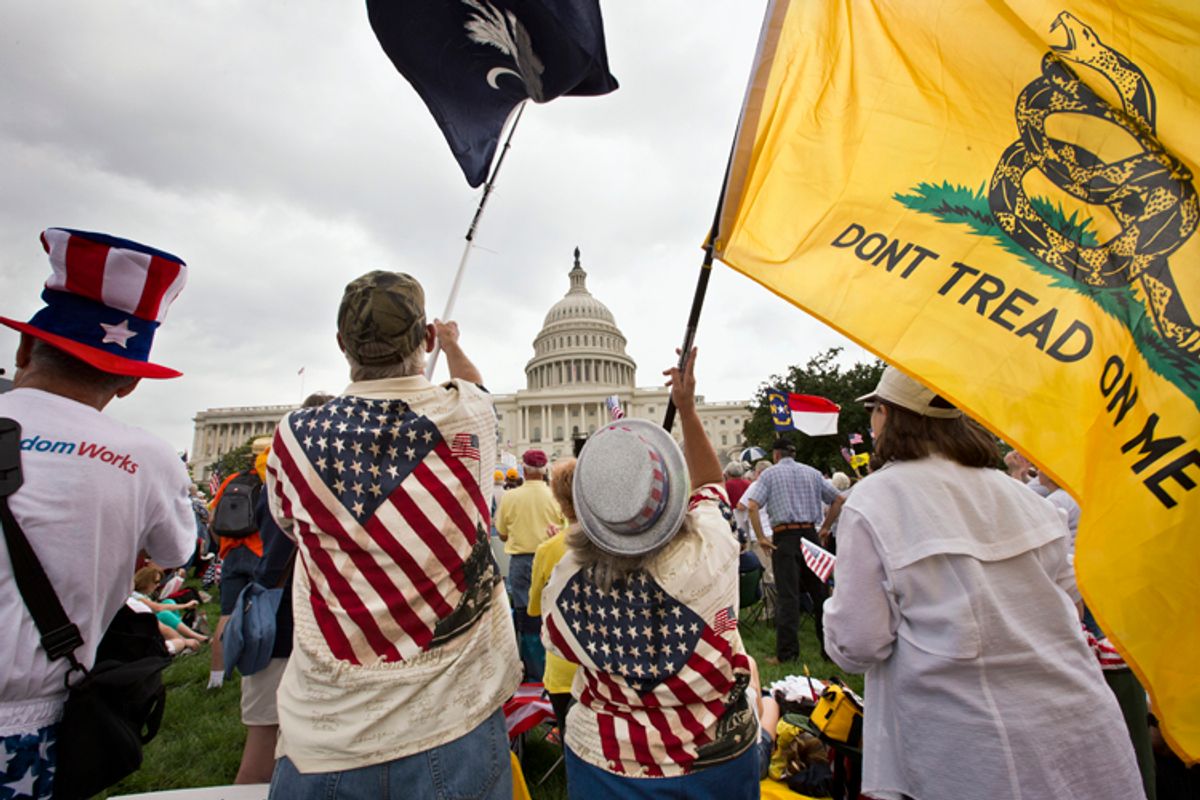 This should be pretty obvious, I hope, but you probably shouldn't donate money to a "Tea Party" group. You, the Salon reader, probably weren't considering doing that any time soon, but what I mean is that no one should ever donate money to a "Tea Party" group, even (especially!) people who explicitly agree with "Tea Party" politics and support "Tea Party" candidates. Because (and this shouldn't surprise you if you've been keeping up with the modern conservative movement) many of these groups don't actually do anything to help Tea Party candidates. They just raise money and spend it on themselves and their friends. Because barely regulated free-for-all campaign financing is both a boon to powerful interests and a windfall for shady political consultants.

Roll Call recently ran the numbers on spending by a number of Tea Party groups, and they are all spending quite a bit on overhead and "office expenses" and travel and not that much on actual candidates. The Wire's Philip Bump helpfully broke down the spending into pie charts, to make it clear how much these groups are spending effectively on themselves. A PAC called the Madison Project spent $1.8 million in the 2012 cycle. $97,000 of that spending was on candidates. The Daily Caller tells us of another PAC, the Tea Party Patriots Citizens Fund, that has spent a grand total of zero dollars on candidates, though it has spent quite a bit of money on other things:

According to the year-end spending report filed with the Federal Election Commission, of the $6,405,087 that the group has raised since early last year, $5,335,162 has been spent, and all of it has been put toward operating expenditures.

Operating expenditures -- as opposed to "independent expenditures," which means money spent on communications to voters regarding actual elections -- is stuff like renting really expensive lists of more people the organization can hit up for donations, and paying consultants who specialize in helping groups raise more money to spend on consultants, and direct mail sent to people the organization hopes will send them more money to spend on consultants and direct mail and list-rental. And that is where your grandfather or uncle or dad's $200 donation to that Tea Party group went, minus the portion that was just directly spent on the six-figure salary of the group's president and CEO.

As I've mentioned a few times over the last few years (see: here, here, here, here and here for a quick primer), the conservative movement is an elaborate moneymaking venture. Many on the professional right owe their livelihoods to a large and growing network of nonprofit donor-funded groups and for-profit consulting and direct marketing companies hired by those groups. It helps that conservatives tend to be richer and older than liberals, as your ideal mark needs to have a decent-size nest egg.

The scam has been going on for a while, and for a while, it worked out well for everyone, so no one complained. But the newer groups are both way too obviously scamming people and also not doing anything to actually help the Republican Party, so certain elements of the conservative movement are finally beginning to speak out about the long-standing practice of soaking the grass roots. After years of supposedly reputable conservative media organs selling their subscribers snake oil it is a bit rich to hear them suddenly warn about charlatan consultants, but the con worked better when fewer people were in on it. It also worked better when all these groups were ostensibly working to help the GOP, but the current trend in Tea Party groups is promising to purify the party by attacking RINOs, most of whom are conservatives in good standing with the elite donor class. (As opposed to the sucker donor class, though plenty of mega-donors are also inveterate suckers.)

So when establishment Republicans point out that the Tea Party is being bamboozled, just keep in mind that their actual complaint is that these amateurs are ruining it for the rest of them.