"We’ve known it would happen at some point. We just didn’t know when” 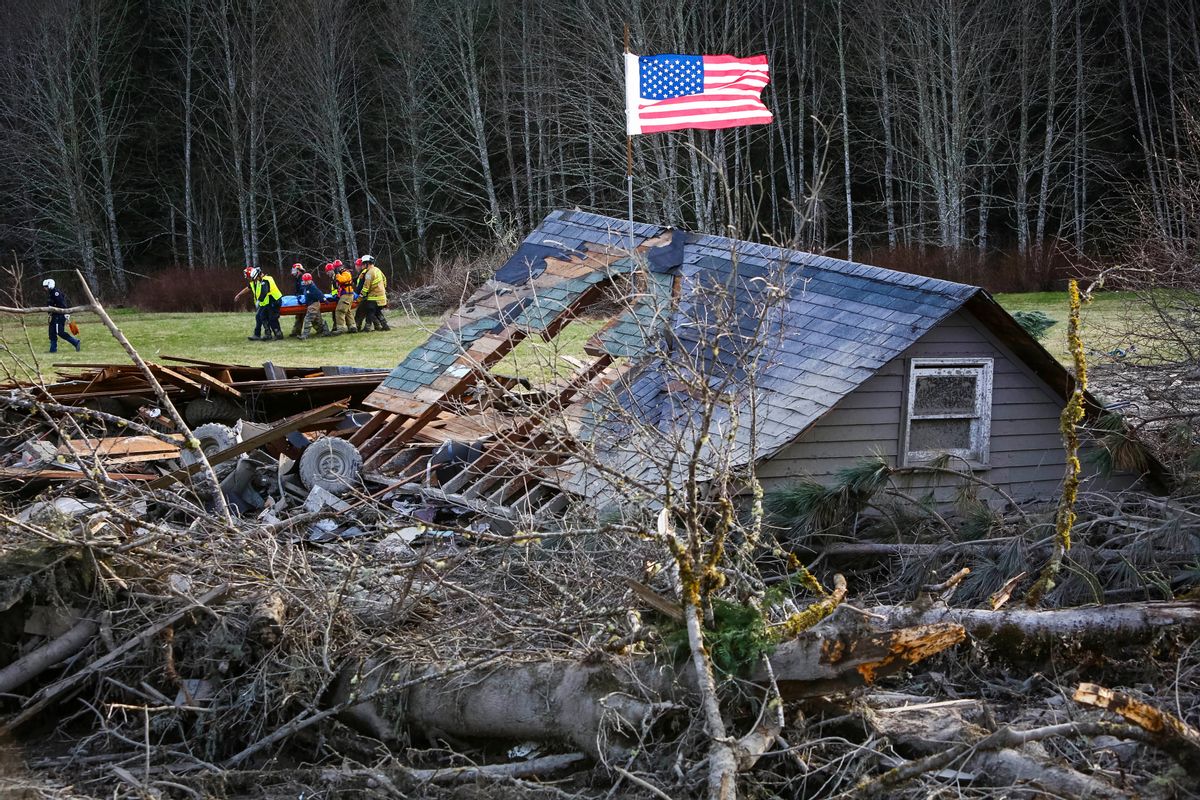 Rescue workers remove a body from the wreckage of homes destroyed by a mudslide near Oso, Wash, Monday, March 24, 2014. (AP Photo/seattlepi.com, Joshua Trujillo)
--

Grim developments continue to come from the massive mudslide that plowed through a hillside town in Washington state this past weekend. After a day of working through the rain, rescuers put the death toll at 16 late Tuesday night, but say it could rise to 24 once additional bodies are confirmed.

Now, questions are being raised about why residents were allowed to build homes on the hill in the first place -- and in fact, had been raised 15 years earlier. Geomorphologist Daniel Miller, along with his wife, Lynne Rodgers Miller, filed a report back in 1999 with the U.S. Army Corps of Engineers warning of “the potential for a large catastrophic failure,” the Seattle Times reports. More from their investigation:

Daniel Miller, a geomorph­ologist, also documented the hill’s landslide conditions in a report written in 1997 for the Washington Department of Ecology and the Tulalip Tribes. He knows the hill’s history, having collected reports and memos from the 1950s, 1960s, 1980s and 1990s. He has a half-dozen manila folders stuffed with maps, slides, models and drawings, all telling the story of an unstable hillside that has defied efforts to shore it up.

That’s why he could not believe what he saw in 2006, when he returned to the hill within weeks of a landslide that crashed into and plugged the North Fork of the Stillaguamish River, creating a new channel that threatened homes on a street called Steelhead Drive. Instead of seeing homes being vacated, he saw carpenters building new ones.

“Frankly, I was shocked that the county permitted any building across from the river,” he said.

...His perspective stands in contrast to what John Pennington, head of Snohomish County’s Department of Emergency Management, said at a news conference Monday. “It was considered very safe,” Pennington said. “This was a completely unforeseen slide. This came out of nowhere.”

Landslides are relatively common in Washington; as Andrew Freedman explains at Mashable, the U.S. doesn't have a strong advanced warning system in place, in part due to the difficulty in identifying immediate risks. As University of Washington geologist Dave Montgomery put it when discussing the potential impact of climate change, "The right question to ask, particularly in terms of this landslide on the Stilly, is to what degree do we want to investigate the hazards that are out there in the world around us and communicate that to everybody in society so we can all make informed decisions about where we live, the risk we may be running, how our infrastructure is a raid on the landscape.”

But the hill question, according to the Times, was sometimes referred to residents as "Slide Hill" -- perhaps that should have been another warning sign against building there. "We’ve known it would happen at some point," Miller said. "We just didn’t know when.”