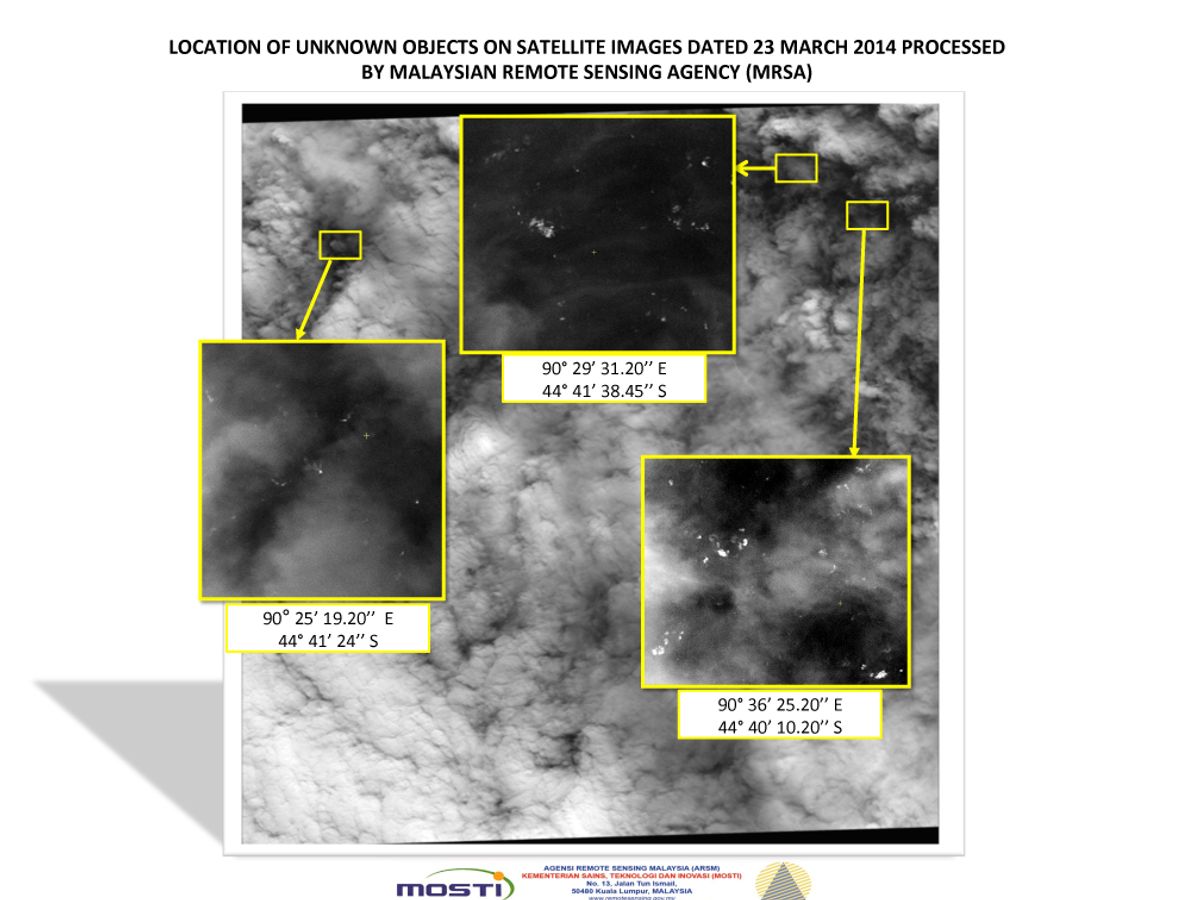 This graphic released by the Malaysian Remote Sensing Agency on Wednesday March 26, 2014, shows satellite imagery taken on March 23, 2014, with the approximate positions of objects seen floating in the southern Indian Ocean in the search zone for the missing Malaysia Airlines Flight 370. Malaysian Defense Minister Hishammuddin Hussein said at a news conference in Kuala Lumpur Wednesday that a satellite has captured images of 122 objects close to where three other satellites previously detected objects. (AP Photo/Malaysian Remote Sensing Agency) (AP)
--

A U.S Navy black box detector and a Bluefin-21 underwater drone have arrived in Perth, Australia, to help in the search for Malaysia Airlines Flight MH370, which disappeared on March 8 after abruptly veering off of its scheduled course to Beijing. On Monday, March 24, Malaysian Prime Minister Najib Razak announced in a televised press conference that according to data from British satellite company Inmarsat, the missing flight had "ended" in the Indian Ocean.

Satellite images taken by France's Airbus Defense and Space on Sunday were released yesterday and described by the acting minister of transport, Hishammuddin Hussein, as the "most credible" evidence yet. The images show 122 objects in what is being described as a possible "debris" field. The images are also located near previously spotted images by Australian and Chinese satellites. According to the Guardian, the debris field captured by the French satellite is around 400 square kilometers or approximately 150 square miles. The search zone in its entirety is 30,000 square miles.

The Australian Maritime Safety Authority, in a release yesterday, said that the search area would be split into eastern and western zones, each with six planes and a ship. However, the Guardian is now reporting that there are only 11 planes taking part in the search. Planes from Australia, the United States, China, New Zealand, Japan and South Korea are involved in the search. China has also sent several ships to the area including an icebreaker that had been docked in Perth post-Antarctic mission.

On top of combing the ocean for physical evidence of where the plane might have gone down, the search team is also looking for what is described as "acoustic pings" emanating from the plane's black box. The plane's black box has a cockpit voice recorder and also a data recorder; beacons for each of these recording devices will go off once the black box makes contact with water. The beacons will let off a signal every second -- but only for 30 days. This means that the search team has until April 7.

The Guardian reported that the maker of Malaysia Airlines Flight MH370's black box, Dukane Seacom, says that the batteries for the beacons may last an extra five days. If so there's a small hope that the search team has until April 12 to find the black box and what happened to the missing Boeing 777 and 239 passengers who presumably died on board.

Search crews will attach the black box finder to Royal Australian Navy’s HMAS Ocean Shield and tow it through the water to pick up signals. The Bluefin-21 drone will dive deep and use sonar to detect any sunken debris.

Without any physical evidence, there has been widespread skepticism that the plane ran out of fuel and crashed into the Indian Ocean. Families of the passengers have expressed anger and frustration with the Malaysian government and Malaysian Airlines for their handling of the tragedy. In Beijing some families of the 154 missing Chinese passengers protested at the Malaysian Embassy, chanting, marching and throwing water bottles.

Yesterday a Chinese special envoy to Malaysia, Zhang Yesui, met with officials and demanded to see all of the evidence that the plane went down in the Indian Ocean. According to Reuters, he called for "unremitting efforts" to find the plane.