Paul Ryan’s endless “I am not a racist” tour

If he wanted to prove his racial goodwill, why didn’t Ryan object when O’Reilly called Barbara Lee a race hustler? 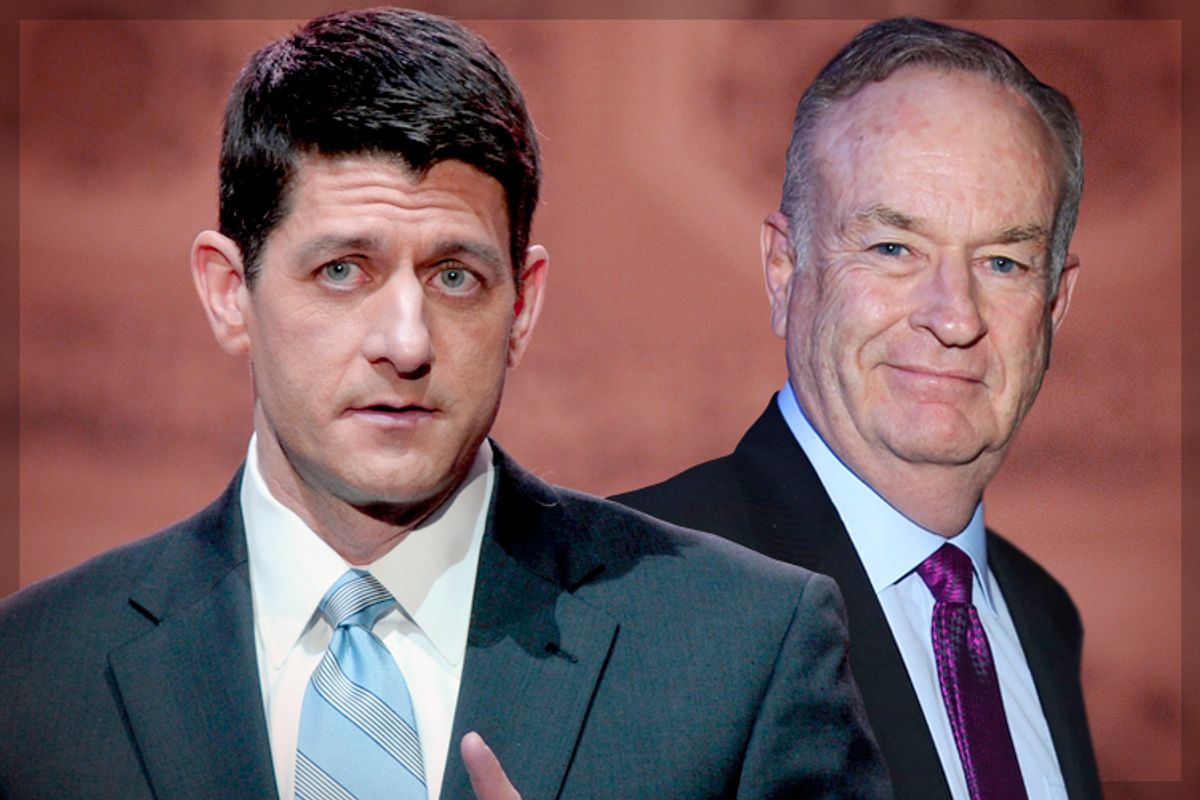 Will Rep. Paul Ryan ever finish his self-serving “I am not a racist” tour? Maybe not, if he keeps coming up with new ways to be offensive. What was Ryan thinking Tuesday night, when he let Bill O’Reilly attack Rep. Barbara Lee as a “race hustler,” without even trying to come to her defense?

O’Reilly built a whole segment around Lee’s condemnation of Ryan’s comments about “inner city” culture as “a thinly veiled racial attack.” He invited Ryan on the show to talk about his conversation with Lee, and what he most wanted to know was whether the Oakland Democrat had apologized to Ryan. Ryan didn’t exactly answer, but he used Lee to exonerate him from charges of racism.

“She does not believe that I have these views,” he told O’Reilly. “She knows me well, and she knows that I don’t have a racist bone in my body.”

O’Reilly wasn’t satisfied: “Then why did she imply you did?”

“Well, you’ll have to ask Barbara that,” Ryan averred. The host jumped in again:

"No, I’m not mad at her. I’m a big boy. I understand that if you challenge the status quo sometimes you’ll be misinterpreted…”

And that’s when O’Reilly got to the point of his segment: trashing Lee and other black leaders as “race hustlers.”

It’s intentional. With all due respect to you, because I think you’re a good man, they don’t want a conversation, they don’t want to solve the problem. These race hustlers make a big living, and they get voted into office, by portraying their constituents as victims. And it’s all your fault, and it’s my fault, it’s the rich people’s fault, and it’s the Republicans’ fault — it’s everybody’s fault except what’s going on.

Maybe Ryan got distracted by the whole neck tattoo thing, but he remained silent during O’Reilly’s tirade, just smiling meekly and nodding. Even when the bullying host paused, Ryan didn’t bother coming to Lee’s defense; he effectively co-signed O’Reilly’s attack. “Here’s what I want to do: I want to solve the problem,” he told the host. And then he went on with his stump speech about how anti-poverty programs don’t work.

So let’s get this straight: Ryan effectively uses Lee as a human shield against charges of racism, insisting “she knows I don’t have these views” and “she knows me well” and “she knows I don’t have a racist bone in my body.” But when O’Reilly trashed Lee as a “race hustler,” Ryan can’t be bothered to say a word on her behalf.  Instead of smiling and nodding, imagine if Ryan had shown a little spine: "Look, Bill, Barbara and I disagree on these issues, but she is not a 'race hustler,' she's a strong public servant looking out for her constituents."

But you can’t imagine it, because Ryan likes to talk tough about the "character" of “inner city” men, while kissing the behinds of bullies like O’Reilly. Instead of squirming over charges of racism, Ryan is enjoying the acclaim they’re bringing him on the right, where he’s hailed as a teller of tough truths. And if Barbara Lee winds up collateral damage as Ryan is lionized by his wingnut admirers, so be it. I'm not going to say that's racist, but it certainly tells me something is lacking in his character.