Research shows that the number of SWAT teams in municipalities smaller than 50,000 is up more than 300 percent 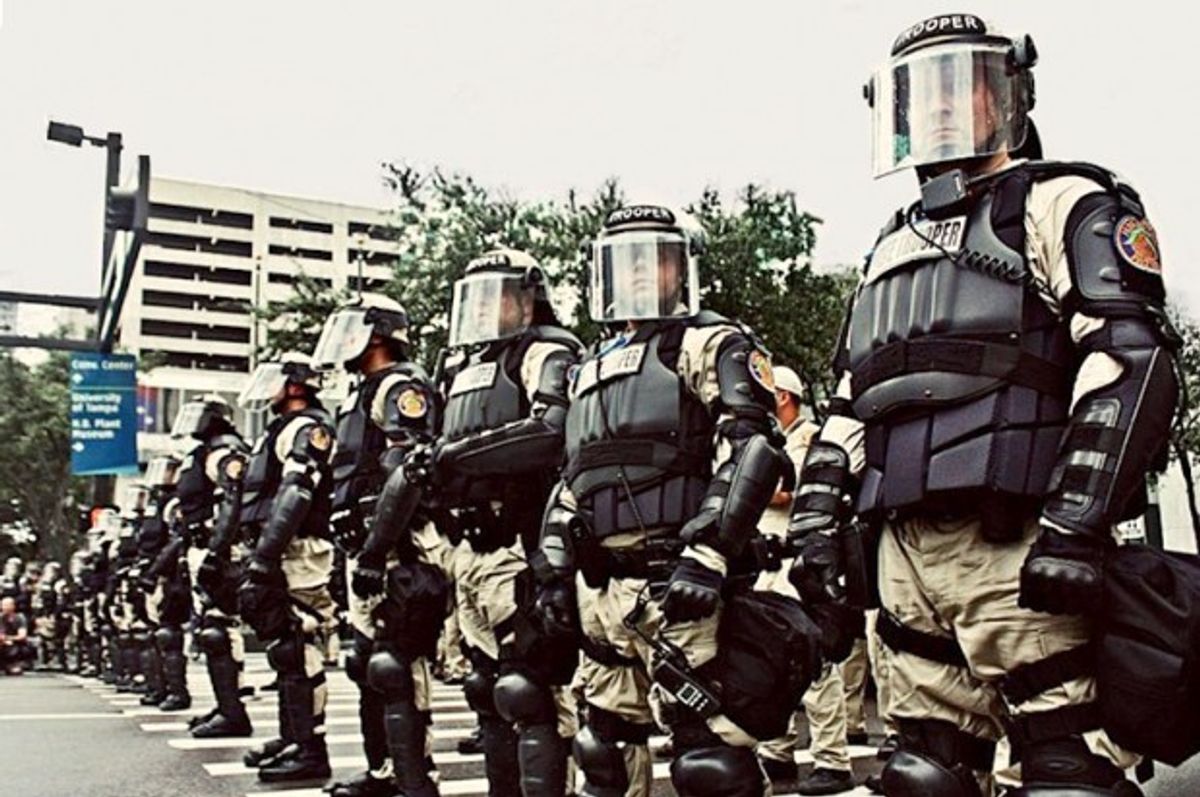 For nearly half a century, the general trend within America’s police precincts has been toward greater militarization, a transformation initiated by the culture wars of the 1960s and facilitated by the war on drugs, fear of inner-city crime, and anxieties over the threat of terrorism.

Fear of drugs, crime and terrorism have been used to justify the expansion of SWAT programs and the acquisition of military grade weaponry and vehicles in America’s smaller towns. Citing previous work, investigative journalist Radley Balko writes that the number of SWAT teams in municipalities with populations between 25,000 and 50,000 “increased by more than 300 percent between 1984 and 1995,” and that 75% of all of these towns had their own SWAT teams by the year 2000. Small precincts acquired wartime weaponry and a warrior culture was engendered among community police.

The ACLU is currently working on a major investigation to illuminate the extent of militarization across America. Here are four shocking examples of militarized police in America's small towns.

A town with a murder count of two since 2009, Keene’s city officials surreptitiously accepted a $285,933 grant from the Department of Defense in 2012 to purchase a Ballistic Engineered Armored Response Counter Attack Truck, or BearCat.

The grant was offered through the 1033 program, which was signed into law in 1997 and created a pipeline for the DOD to pass surplus military gear to local police precincts. It may seem preposterous that a sleepy New England town would need to commandeer a tank intended to withstand IED attacks, but in the post-9/11 era, nearly any degree of militarization can be justified with the threat of terrorism.

“We don't know what the terrorists are thinking,” warned Jim Massery, sales manager for the creator of the Bearcat, Lencor Armored Vehicles, to investigative journalist Radley Balko, before questioning whether residents who took issue with the BearCat “just don’t think police officers’ lives are worth saving.”

A series of town meetings led by city councilor Terry Clark revealed a sizable number of city residents opposed the local SWAT’s acquisition of a BearCat. “This is an agreement between the government and arms dealers, essentially,” noted Clark after a representative for Lencor revealed that the transfers of military equipment allow them to tap into the DOD’s $34 billion terrorism budget.

Surrounding cities have signed pacts with Keene to borrow the BearCat when needed, and support throughout the state for similar vehicles remains strong: A state bill to halt the purchase of military equipment by New Hampshire police departments was shot down in late March, making it likely that more departments will seek BearCats from the DOD, in addition to the 11 that already have them.

Ogden, a medium-sized Utah town flanked by the Wasatch mountain range and the Great Salt Lake, was for a long time little more than a junction point for railroads crisscrossing the country. These days, it’s ground zero for the debate over the use of SWAT in Utah, which has pitted fervent proponents of aggressive paramilitarism against those who want alternatives to the hyper-violent police confrontations that have roiled the state in recent years.

The flashpoint for the debate came in January 2011, when members of Ogden SWAT battered down the front door of Matthew David Stewart’s home. When the army veteran awoke to the sound of shouting voices and shuffling boots, he grabbed his bathrobe and Beretta and began exchanging fire with the officers, killing one and wounding seven while sustaining multiple gunshot wounds himself.

This disastrous account of law enforcement excess was bookended by death, starting with the raid fatality and ending with Stewart’s own suicide in his prison cell shortly after a judge threw out his self-defense claim. However, the questions raised about the use of military tactics have endured, imbued with urgency by a steady drip of fatal statewide SWAT encounters in the last two years.

Although some in the state advocate more diplomatic means of apprehending drug and other types of offenders, the zeal for Ogden SWAT remains stronger than ever as the institution burrows itself deep into the community’s cultural DNA and swells into nearbyjurisdictions. Three separate bills in the Utah legislature would limit the ability of SWAT to serve “no-knock” raids (the deadly kind in which officers barge in the door while bellowing “Search warrant!”) and increase the standard of transparency that SWAT-equipped precincts must meet.

Richland County, where Columbia is located, caught the attention of some activists in 2008 when its sheriff purchased an armored personnel carrier from the DOD. Police in the area continued buying military-grade vehicles unchallenged. Most recently, the Columbia Police Department purchased a mine-resistant war truck from the DOD in the fall of 2013.

Unlike Keene’s BearCat, Columbia’s “U.N. blue” has a turret that can be armed with a 50-caliber machine gun. It’s also built to withstand any mine blasts it may trigger in the streets of the "Capital of Southern Hospitality.”

The Mine-Resistant Ambush Protected Vehicle (MRAP) is valued at $658,000, but was handed off virtually free to the Columbia Police Department under the 1033 program. The Nerve foundthat the only costs incurred by the Columbia police for obtaining the vehicle in September 2013 came to about $2,800: a $2,000 annual fee for participating in the 1033 program, and $800 to actually transport the vehicle from a military base at Fort Bragg, North Carolina.

Under the conditions of the 1033 program, the DOD technically retains ownership of the military equipment it loans out, and recipients must use the equipment for at least one year before it is returned. However, the national ACLU confirmed with AlterNet that they’ve never heard of a department returning equipment to the DOD.

Unsurprisingly, drugs and terrorism were used to justify the presence of the vehicle. The Columbia Police Department’s application for the MRAP explained that the armored vehicle was needed to “protect our officers and the public during high risk counter drug and counter terrorism operations within the city of Columbia and the state of South Carolina.”

Victoria Middleton, executive director of the ACLU-South Carolina, noted that local news outlets failed to commit significant time to covering militarization in Columbia. “There has been a huge distraction,” she wrote to AlterNet in an email, “[with the] search for a new police chief, turf issues with Richland County Sheriff department, [and] city administration problems.”

Documents reviewed by AlterNet reveal that the ACLU-South Carolina sent a FOIA request to the Richland County Sheriff’s office in March 2013, demanding the disclosure of “all 1033 programs inventories created and maintained” by county police departments. The sheriff’s office responded with a warning that fulfilling the ACLU’s request “may result in a charge of several thousand dollars,” which the ACLU immediately countered with another letter.

To date, the Richland County Sheriff’s Department has not complied with the ACLU affiliate’s FOIA request.

The Paragould police chief attempted to turn a rising crime rate into a carte blanche for sending fully outfitted SWAT teams into communities to ask every single person in public for identification. The population of the town is 27,000.

"To ask you for your ID, I have to have a reason,” said police chief Todd Stovall at a town hall meeting in December 2012. "Well, I've got statistical reasons that say I've got a lot of crime right now, which gives me probable cause to ask what you're doing out.”

The mayor stood by his police chief. "They may not be doing anything but walking their dog, but they're going to have to prove it,” he added to Stovall’s remarks.

The policy of de-facto martial law captured national attention and inspired an immediate response from the Arkansas ACLU. Stovall issued a statement justifying police-state tactics as features of “proactive police philosophy dedicated to managing problems before they become unmanageable,” and gave limited lip service to the Constitution and rule of law in general.

The public outrage forced city officials to back away from the Orwellian initiative.