The brilliant indie actress says she's just lucky the likes of Jonze, Charlie Kaufman and James Franco turn to her 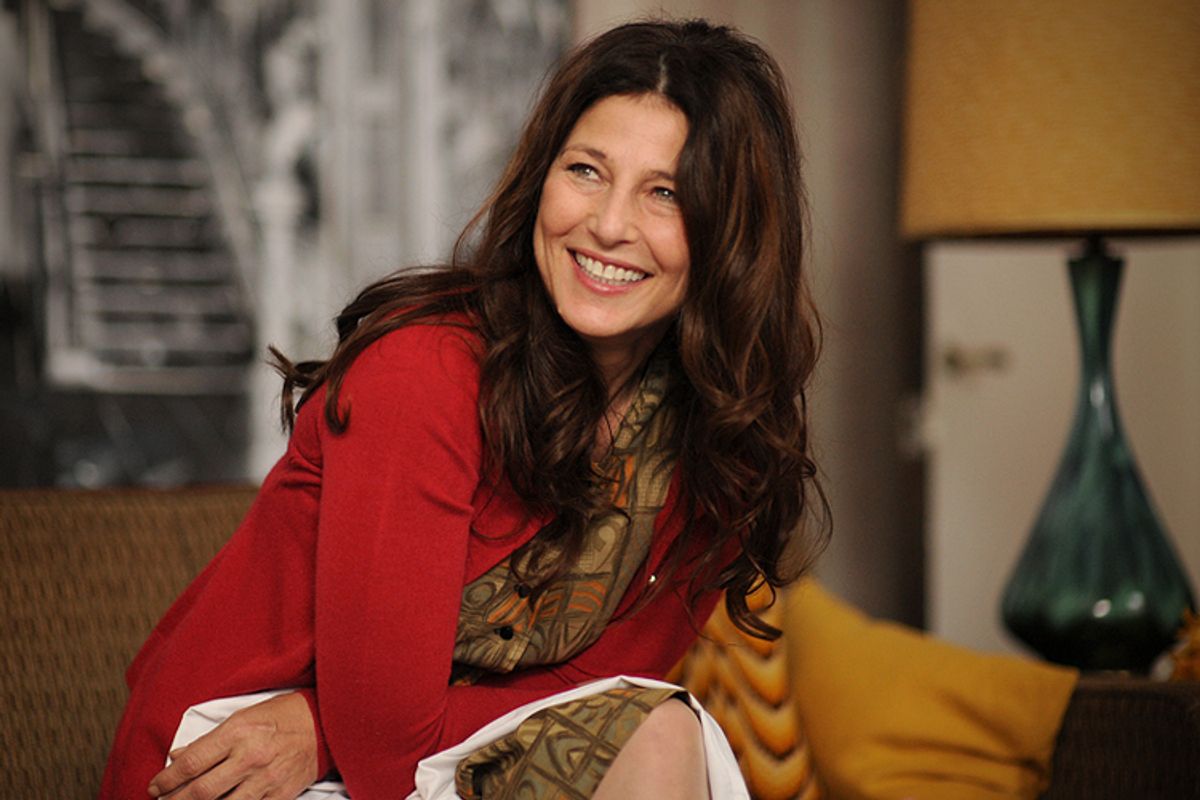 Catherine Keener thrives on chaos, or, in some cases, not really knowing what the hell is going on. When I get her on the phone, she’s zipping down the stairs and hopping into her car. There’s that irritating “beep beep” seatbelt alarm noise providing the background music as we begin the interview.

Keener’s most recent project, “Maladies,” is the latest in the seemingly nonstop barrage of mind-fuckery from James Franco, working with director/artist Carter as his consigliore for the second time. There’s familiarity in the script (the hell of being an artist and the inevitable persecution of being an outsider), but there’s also inexplicable weirdness, in the vein of Charlie Kaufman or Spike Jonze. Keener, however, is a deceptive chameleon, leaping from beguiling art film to the mainstream (“Captain Phillips,” “The 40 Year Old Virgin”) with an honesty that comes through over the phone. She’s the kind of woman with whom you’d want to grab a beer and then discuss Godard.

All of which, oddly, makes sense — the two-time Oscar nominee is just at home clowning around with the Jackass crew in “Bad Grandpa” as suiting up in “Maladies.” She just goes with the flow, and with her infectious laugh, lust for cursing and all-around everyday charm, simultaneously manages to lose and find herself in whatever role she attempts.

How did Franco and Carter approach you about the role? What were your initial impressions of the script?

My initial impressions were I didn’t understand it, but that’s usually the case with me [laughs]. I have kind of a gut reaction to things that’s kind of inexplicable, but I think “Can I connect to this or not?” Then it comes down to the people. I was already friends with James and I love him. He’s great. I became friendly with Carter. As soon as I talked to him, I just kinda fell for him. He’s a wonderful person.

I don’t know anything about him. He seems pretty enigmatic.

He is enigmatic, but it’s not artifice.

So not in a douchey way?

No [laughs]. It’s just who he is. He’s a very talented, authentic person. I really fell for him kind of big time.

Had you seen "Erased James Franco," Carter and Franco’s first project, before you met him?

No, I still haven’t! I just thought of the movie as a trip I wanted to take with them. I’d seen Carter’s art and I’d been to his studio in New York, and I just loved his outlook. I’ve done jobs based on that a lot of times.

How did you approach your eponymous character, Catherine? She’s a lot of things: a cross-dresser, a painter; she might be the sanest person in the film. Did improv come into play in the movie?

No. That funny, because I didn’t even think about that. I wouldn’t have known how to improvise, to be honest. It became very personal for me, but I wanted to do what Carter thought. It was not my thing. It was his. Sometimes if you’re invited to do improv, or you feel comfortable enough or beg to because you feel it’s not working, that’s a whole different thing. I feel that way about a lot of writers and directors I work with. I don’t want to mess with their stuff. I have my own shit that I have to do and they give me the room to do that. I don’t really want to do that [improv]. I have work I have to do apart from that, which is trying to figure out why those words are there, in that order.

Speaking of Carter and Franco, you’ve dealt with some very unique artists in the past, like Charlie Kaufman and Spike Jonze. Do you have any idea why they turn to you as their muse?

I’m not sure they know I’m their muse [laughs]. I don’t know. I honestly feel like they might read that I want to do that, which excites me and it does. To just play ball. Especially if it’s their work, they want someone who is excited. That might just be one of the essential things. I know luck factors in and I appreciate luck when it presents itself.

You’ve got a great laugh too.

Thank you! Why not! That could count as much as anything else. What I take that to mean is, I fucking think things are funny. A lot of stuff is funny, and I’m an easy laugh. I’ve actually been accused of laughing too much in a movie, and that’s totally fine. That doesn’t bother me. I figure it’s all valid, so whatever. If the positive outweighs the negative, then I’ll get work, and it doesn’t mean that the stuff that is negative isn’t true.

In “Maladies,” I got a very Jack Kerouac vibe in a scene with you and Franco where he’s ranting about spontaneous creation. Were you thinking about beat culture during the making of the film?

Yeah, I actually was. A lot of it, even style-wise, calls that up. But the dialogue, the costumes and the experimentalism of it, these people live together and connect this way. The beautiful David Strathairn has that line about being jealous of us leading a creative life. He envies it. That’s the ultimate sadness of the movie is that we’re all connected that way, and everybody wants that in life, which is to connect as humans, and being such outsiders is hard. In our world, we accept each other, and then suddenly I’m scrutinized and judged in a way by the outside worlds’ parameters. And it’s really shocking to me.

The film is non-linear. It ostensibly takes place in the '50s, but you’re introduced talking about the Jamestown Massacre. The point I got out of that is that artistic types will always be persecuted throughout time.

That’s definitely how I feel too. It is persecution, and there is more safety in numbers. We’re a pack of oddballs. We’re strangers, but not to each other.

I’d be remiss if I didn’t mention that you also played an artist in an episode of “Seinfeld” called “The Letter.”

[laughs] Shit! Yeah, you would be remiss! I think it would almost be unethical if you didn’t bring that up!

What did you take from that character to “Maladies?” Sorry, I’m just kidding.

No, it’s not. That was really funny. That was so fun to do that because it was the Kramer painting! I was a friggin plagiarist, it was hilarious. Other than that, I brought nothing to role but memory.

I thought this was a great year at the Oscars. I was personally rooting for June Squibb, but it was exciting to see new faces. It seems like each year there are better roles for women over 25.

Yeah, I’m all for women! I think it’s good. I definitely think it’s a greater time than it’s been. I don’t know the numbers or anything like that, but it just seems like there’s a lot of smart women being represented out there who are representing. And it’s really a pleasure for me to watch.

Playing with the non-linear time element of “Maladies,” is there a dream director you would work with, living or dead?

Oh shit, man! I wanna work with everybody. I think directors are amazing. Not to sound pretentious, but I can’t help it, I love Lubitsch. Who did "My Man Godfrey"? La Cava! Or Kurosawa! I mean, Jesus, I would have loved to have been in one of those!

Or Sergio Leone! I just named all the dead ones because you said I could, but there are so many great directors now, and I’ve gotten to work with so many of them. I’m so friggin' happy and lucky that I feel full through my work. When you get to work for the ones you respect the most, it’s awesome.