When charters try to crowd out marginalized public school kids 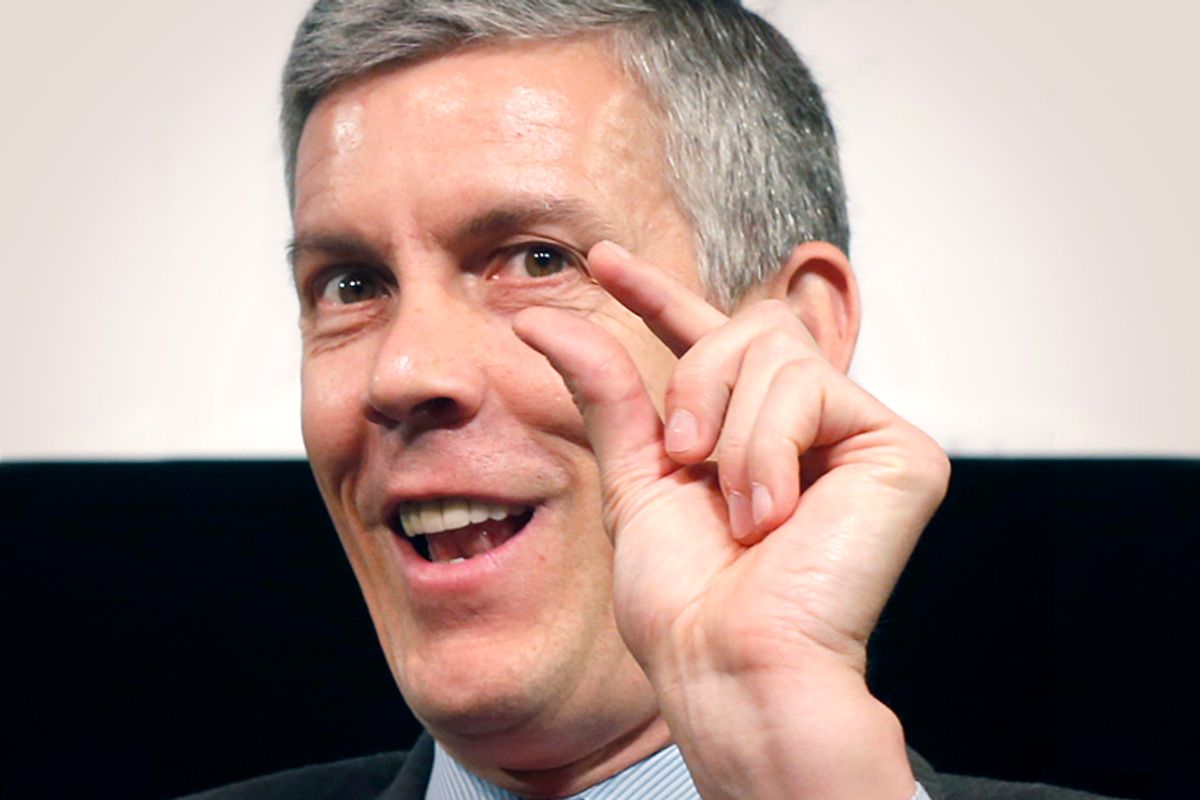 In the national debate over education, corporate education reformers are arguing that charter schools are just another option for parents who deserve to have an array of choices on where to send their children. This framing purports to situate charter schools alongside public schools in coexistence rather than competition. But this is false. The harmonious vision falls apart when charters literally push out public schools, as illustrated by the current battle between charter chain Success Academy and several public schools in New York City’s Harlem.

A close look at the seemingly local dispute also shatters the fundamental premise that charters are as “public” as public schools, serving all children. With the charter movement in 42 states and stronger than ever, the struggle for space in Harlem is shedding light on some of the sector’s most dubious practices.

At the center of the dispute in Harlem, between Success Academy CEO Eva Moskowitz and New York City Mayor Bill de Blasio, are a group of students for whom the stakes of the debate -- not just in Harlem but across the country -- are quite high. Special education students are largely underrepresented in the charter sector, and if Success Academy had expanded the way it had hoped, it would have reduced space for a public school serving some of the city’s highest need students. That school is in District 75, a non-geographic district that serves students with disabilities across all of New York City, including children with autism, emotional or behavioral disorders, and multiple disabilities. Nationally, children with these types of high need disabilities are even more underserved by the charter sector than special needs children in general.

What’s going on in Harlem, then, may be unique to New York in terms of co-locations -- when several schools are housed in the same building -- but taps into the much broader issue of access and exclusion in the education “reform” movement. The territory dispute over limited space in New York City is symbolic of those national trends, with a charter school (Success Academy) attempting to expand its space at the expense of existing public schools (PS 149 and PS 811, the latter of which is in District 75). District 75 schools are often co-located with public schools that serve general education populations. Sometimes, District 75 schools exist at multiple sites, meaning a principal may be at one site, but the school may have other locations around the city with their own students, teachers and administrators.

In the struggle to find space for both public and charter schools, District 75 schools have long been the first to get shuffled around, according to Advocates for Children, an organization that defends access to education for students with disabilities and other marginalized children facing discrimination. “Because they’ve been broken up into pieces, the DOE [New York City Department of Education] often hasn’t seen them as having a real claim on being part of an education community,” explained Kim Sweet, executive director at Advocates for Children. But, added AFC staff attorney Paulina Davis, “I think for the students who are in those programs, they very much consider that [location] to be their school. That’s their community.”

Even when they don’t displace a District 75 school entirely, co-locations can encroach on available space and squeeze a building’s available resources. For high-need special education students, who often receive supports like speech, occupational and physical therapy, losing space to additional schools may leave them with literally nowhere to go. If Success Academy had expanded as planned into PS 811 in Harlem, those kids would have been left doing therapy in the halls.

The instability that comes with jostling for space creates an educational challenge for all types of children, who thrive under a steady routine. But for certain populations in District 75, that instability can be especially damaging. “For children who have particular challenges regarding change, dealing with change, or forming relationships, to move them around a lot is especially disruptive to their educational process,” explained Davis. Even small changes in routine can be extremely anxiety-inducing to some children with autism or emotional difficulties; that those students are so frequently expected to adapt or move entirely betrays a disregard for their needs and well-being.

Also at stake is the safety of these populations, whose behaviors sometimes require more support than general ed students. In New York City, as with an increasing number of school districts across the country, schools are monitored by at least one NYPD School Safety Agent (SSAs, or sometimes referred to as “School Safety Officers” or SSOs), uniformed officers charged with maintaining the safety of the students. But as an NYCLU report uncovered late last year, SSAs receive little training in special education, making it much harder for them to meet the emotional or behavioral needs of the children they’re charged with protecting.

The tragic death of 14-year-old Avonte Oquendo illustrates the need for trained, knowledgeable SSAs in buildings that house special needs students. Oquendo, who was autistic and non-verbal, and had a known history of running off, wandered out of his school last October, but was seen and questioned by an SSA before exiting the building. His District 75 school was co-located with two other schools. “Questions have been raised as to whether the School Safety Officers in that school were adequately informed about the needs of the populations with autism who were attending the District 75 school,” said Sweet.

Sweet emphasized that sharing space isn’t always a bad thing. In fact, housing special needs children in the same building with general ed students provides important chances for kids to interact with each other. Integrating disabled and non-disabled students, she says, is beneficial for all children. The problem comes when long-term co-locations become unstable and District 75 students are forced to adjust, not because it’s in their educational interest but because a new program needs their space.

One of the especially sinister aspects to the current battle in Harlem is Success Academy’s own record when it comes to serving students with disabilities -- a record that, once again, is illustrative of the charter sector at large, with the important exception of charters that prioritize serving high-need populations.

Last summer, the Daily News reported that two dozen parents from Success Academy sites were claiming that the school was failing to follow federal and state laws when it came to disciplining their special needs children and that those kids are being suspended and pushed out at disproportionate rates compared to public schools. One Harlem site had a suspension rate of over 20 percent, compared to the single-digit rates of public schools in the same area. Success Academy 4, the location currently in the dispute that would have left District 75 students receiving services in the hallway, does not offer self-contained classes, according to the latest data from Inside Schools. That means that they would have taken space from a school serving a high need population, only to replace it with a school that could not serve that population. By comparison, Harlem public schools in the same area have about 14 percent high need special education students.

“When you have a school that is attempting to come into this community, that is not prepared to accept and service the same students within that community, that is concerning,” said Davis. Disturbingly, a study by the U.S. Department of Education found that, at a quarter of the charter schools surveyed, administrators had told parents that their school would not be a “good fit” for their disabled child. According to the Council for Exceptional Children, discouraging the enrollment of special needs children is illegal since it breaks with the nondiscriminatory policies required of public schools.

To cite charter schools’ high test scores as evidence that they offer a better education than public schools, as Moskowitz does, is dangerously misleading given their exclusion of certain types of learners. “To allow the charter schools, which are supposed to be equal opportunity educators, to dump those students, and to accept only those students who come to them without problems, without issues, without challenges is really to set them up to succeed and public schools up to fail,” said the New York Civil Liberties Union’s executive director Donna Lieberman. “All kids have a right to an education, not just the ones who are easy.”

Mayor de Blasio’s call to rescind three of Moskowitz’ locations was an important push against an ongoing, nationwide effort by well-funded charter investors to encroach on public education. It’s a physical battle, and a political one. And the proponents of charters are not reacting in kind to de Blasio’s small but significant effort to apply even the slightest brakes to their mission -- which has the support of Andrew Cuomo, U.S. Secretary of Education Arne Duncan and the powerful, ruthless national education “reformer” Michelle Rhee. The New York Senate’s latest budget proposal calls to increase public funding for charters and further empower the charter sector. It also reinstates Moskowitz’ co-locations -- meaning that special needs students in Harlem are once again at risk of losing more of their school.

Given the strength and scope of the charter sector in this country, these issues of access and inclusion must be part of any conversation in which these schools call themselves “public.” To advocate for parental choice is one thing. But if the same schools meant to increase possibilities are, in fact, eliminating them for certain children, then the rhetoric of charters falls apart. Students with disabilities deserve schools that can meet their needs and make them feel welcomed and supported. The rights of already marginalized children should not be an afterthought in the education debate. The erosion of those rights is a profound and imminent crisis to the principle of public education.