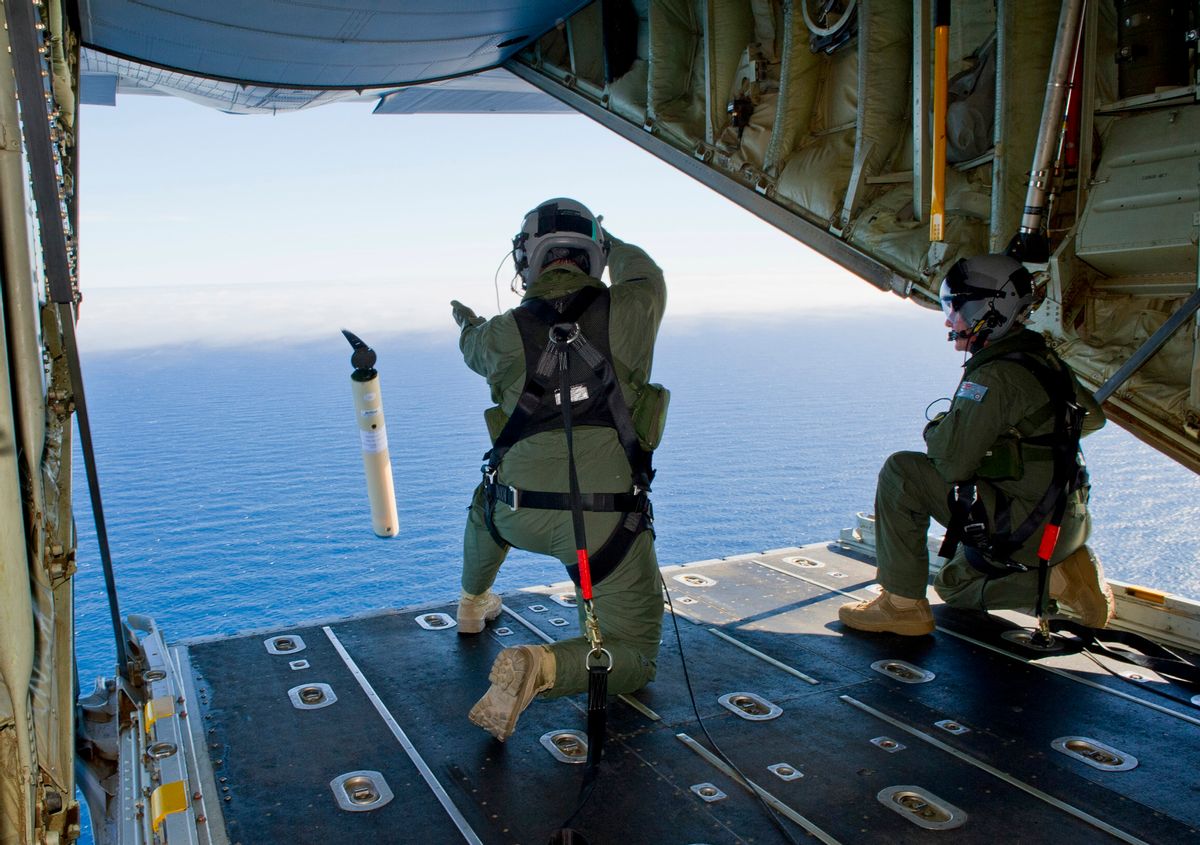 FILE - In this March 20, 2014 file photo provided by the Australia Defence Department, Royal Australian Air Force Loadmasters Sgt. Adam Roberts, left, and Flight Sgt. John Mancey, launch a Self Locating Data Marker Buoy from a C-130J Hercules aircraft in the southern Indian Ocean as part of the Australian Defence Force's assistance to the search for Malaysia Airlines flight MH370. The disappearance of the airplane has presented two tales of modern technology. The public has been surprised to learn of the limitations of tracking and communications devices, which contributed to the plane vanishing for more than two weeks. But the advanced capabilities of some technologies, particularly satellites, have provided hope that the mystery won't go unsolved. (AP Photo/Australian Defence Department, Justin Brown, File) (AP)
--

Planes and ships scoured the new search zone for the missing Malaysia Airlines Boeing 777 on Saturday, hoping to recover and analyze any of the several objects spotted from the air.

NEW OBJECTS, BUT NONE RECOVERED:

A Chinese plane flying over the search zone in the southern Indian Ocean 1,800 kilometers (1,118 miles) west of Perth, Australia, reported seeing three suspicious objects white, red and orange in color. On Friday, planes also spotted several objects, including two rectangular items that were blue and gray. Six ships are in the area trying to recover and inspect them, but without success.

The Australian Maritime Safety Authority said it was not known how much flotsam, such as from fishing activities, is ordinarily floating in the ocean. "At least one distinctive fishing object has been identified," it said.

Malaysia's Defense Minister Hishammuddin Hussein told reporters near Kuala Lumpur after meeting several families of passengers on the plane that he's hoping for some news soon.

Australian Prime Minister Tony Abbott said the job of locating the debris was still difficult. "We should not underestimate the difficulty of this work — it is an extraordinarily remote location."

Relatives and friends of the passengers said they were tortured by the uncertainty over the fate of their loved ones, as they wait for hard evidence that the plane had crashed.

"This is the trauma of maybe he's dead, maybe he's not. Maybe he's still alive and we need to find him. Maybe he died within the first hour of the flight, and we don't know," Sarah Bajc, the American girlfriend of U.S. passenger Philip Wood, said in an interview in Beijing. "I mean, there's absolutely no way for me to reconcile that in my heart."