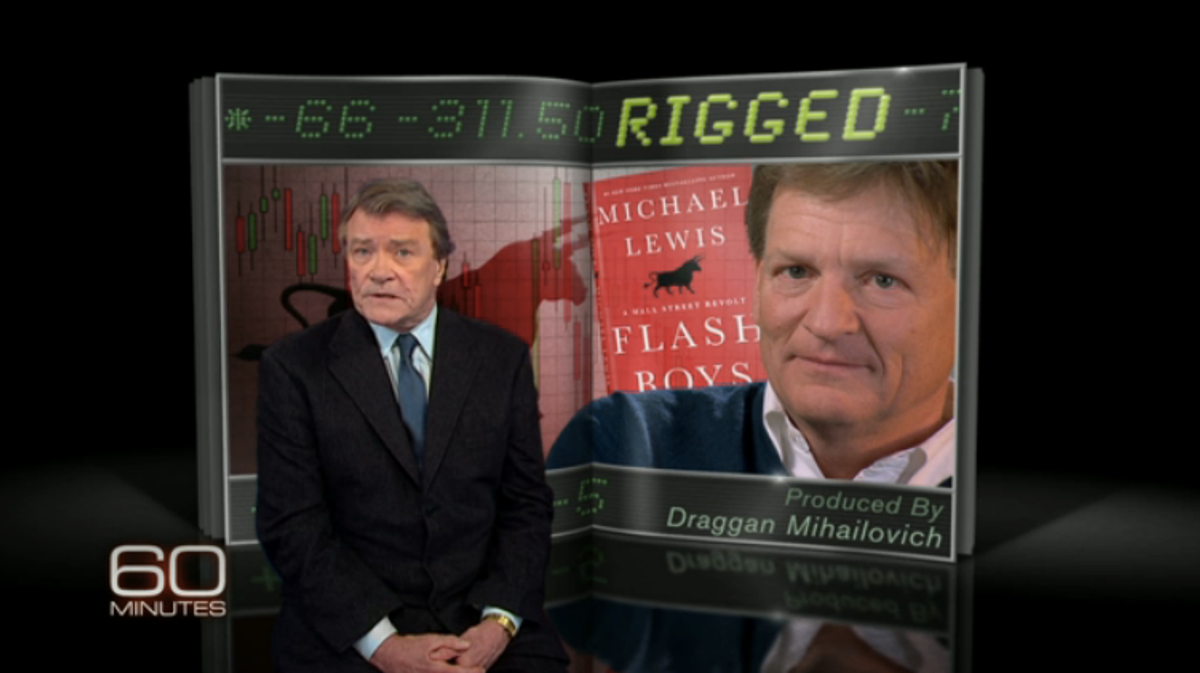 Michael Lewis, the author of bestsellers "Moneyball" and "The Big Short" appeared on "60 Minutes" to discuss his latest Wall Street tale, "Flash Boys," about how one trader discovered that "the stock market is rigged." And now he's trying to fix it.

Lewis explained that high-frequency investing, done by computers, is so fast and so quickly that the computers at the big banks can identify your sales before your purchase goes through. Such was the discovery of Brad Katsuyama at Royal Bank of Canada, who noticed that his trades were only being partially filled.

Banks are "able to identify your desire to buy shares in Microsoft and buy them in front of you and sell them back to you at a higher price," Lewis explained. "It all happens in infinitesimally small periods of time. There's speed advantage that the faster traders have is milliseconds, some of it is fractions of milliseconds. But it's enough for them to identify what you're gonna do and do it before you do it at your expense."

"It's legalized front running," Lewis said. "It's crazy that it's legal for some people to get advance news on prices and what investors are doing. It's just nuts. Shouldn't happen."

Katsuyama eventually put together a team of people to find the source of the problem. They discovered that due to the speed of fiber-optic cables, some banks were receiving information faster than others on the same network. The solution: create a network that equalizes the speed, so no bank has a speed advantage over another.

The network, called IEX, is picking up some steam on Wall Street, with backers like Greenlight Capital and Goldman Sachs. But it's got a lot of powerful enemies, too. Katsuyama, however, is optimistic. "We're selling trust. We're selling transparency," he told "60 Minutes." "And to think that trust is actually a differentiator in a service business, it's kind of a crazy thought, right?"