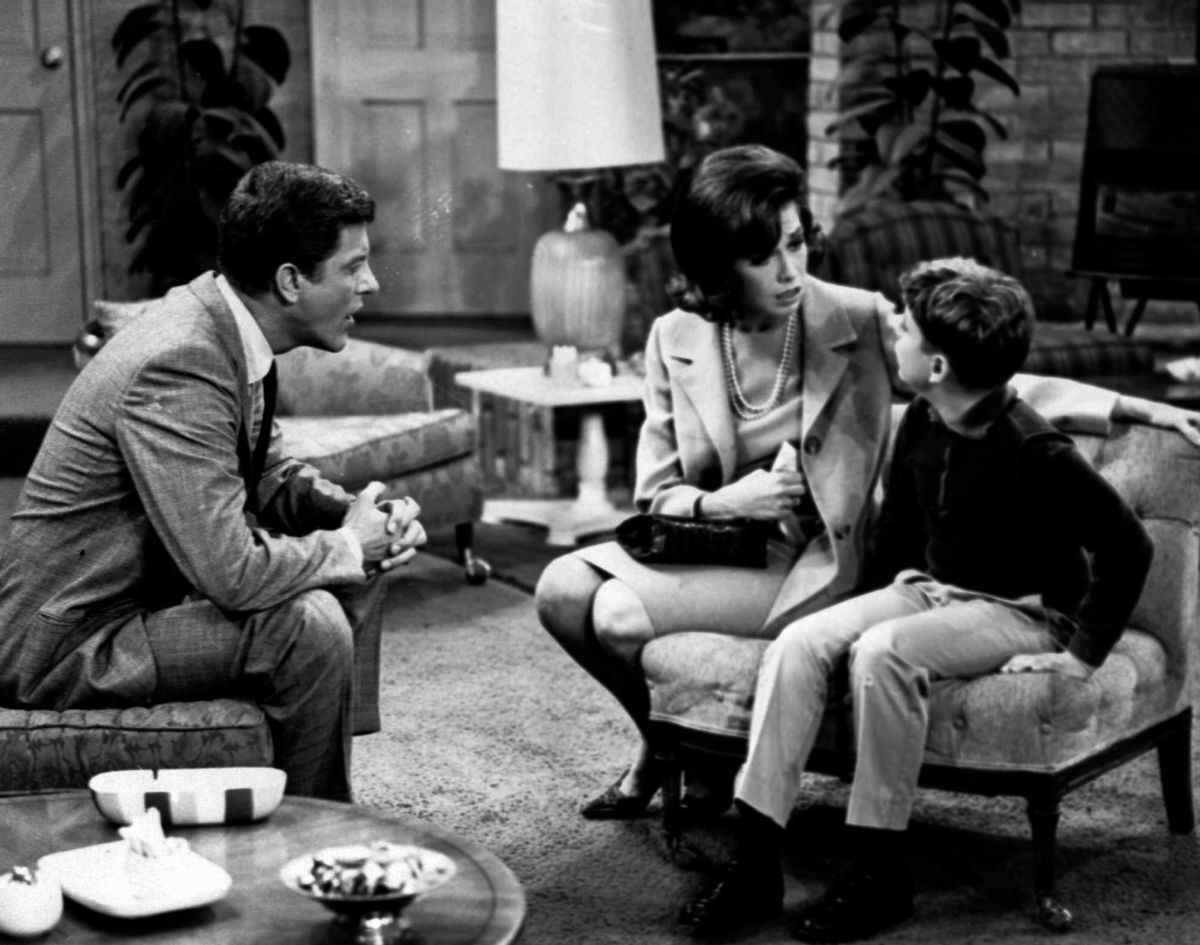 FILE - In this 1965 file photo, from left, Dick Van Dyke, as Rob Petrie, and Mary Tyler Moore, as Laura Petrie, talk to Larry Matthews, who plays their son, Ritchie, on "The Dick Van Dyke Show." Moore is being spotlighted in a new DVD collection called "The Dick Van Dyke Show: Classic Mary Tyler Moore Episodes." The set gathers 20 episodes that dwell on the home life of Rob and Laura Petrie, putting the comic radiance of Moore on full display. (AP Photo/File) (AP)
--

NEW YORK (AP) — Like any "Dick Van Dyke Show" fan, he's happy to catch an occasional rerun of the show while flipping channels.

"If there's nothing new to watch, I'll let the episode play out," says Carl Reiner. "I'm always pleased to see how well those episodes have aged."

Reiner, of course, holds special status as a "DVD" confederate. He created this timeless half-century-old comedy, which premiered on CBS in October 1961, fueled by his real-life experiences as a TV comedy writer-performer and devoted family man in New Rochelle, N.Y.

Among all Reiner's projects as an actor, stand-up comedian, writer, director and producer, "The Dick Van Dyke Show" stands out for its creator: in many ways it tells his story.

And, as no one needs reminding, the unknown actress who won instant stardom as Van Dyke's TV wife was Mary Tyler Moore.

Now, Moore is being spotlighted in a new collection of "DVD" DVDs. "The Dick Van Dyke Show: Classic Mary Tyler Moore Episodes" ($24.98, Image Entertainment) gathers 20 episodes that dwell on the home life of Rob and Laura Petrie, putting the comic radiance of Moore on full display.

Episodes include "The Two Faces of Rob," where Rob fears Laura is cheating on him with a man Rob impersonated as a prank. On "My Husband Is a Check-Grabber," Laura is irked that Rob always springs for his friends' dinner which, she fears, could mean they won't be able to afford to send their little boy to college.

On "Never Bathe on Saturday," Laura is off-camera for much of the episode after she gets her toe stuck in the faucet of the tub while taking a bath. These complications, which take place in a posh Manhattan hotel suite, throw a wrench into what was meant to be a romantic getaway for her and Rob.

"You hear her voice, but she's hardly ever on-screen," says Reiner, now 92, during a recent phone conversation. "Mary was a little upset about it. She wanted more time on camera.

"But I told her, 'Mary, I've just given America the chance to fantasize what you look like naked,'" chuckles Reiner, who wrote the episode. "When it came out, and she realized how very funny it is, she apologized by having a faucet mounted on a little plaque and sending it to my house."

Also included in the set is "Coast to Coast Big Mouth," where Laura blurts out to an interviewer that Rob's boss, conceited TV star Alan Brady, wears a toupee.

"One of the best episodes we ever did," says Reiner, and no "DVD" fan would disagree.

Part of the reason: Reiner makes one of his handful of appearances in the series as Brady, who is appalled that Laura made his baldness public. Brady's scene with Laura, terrified as she struggles to make amends, is a comedy masterpiece.

The script, he says, was penned by Bill Persky and Sam Denoff, an up-and-coming writing team that wanted to break into this hit sitcom.

"They knew me," says Reiner, "and they knew I wasn't at all self-conscious about being bald: I only wear a toupee to feel dressed-up, or if there are more than 5,000 people present. But they knew Alan Brady didn't feel the same way."

"It was one of Mary's funniest performances," says Reiner, who still marvels at the comic genius he discovered and nurtured.

Moore had arrived at "The Dick Van Dyke Show" at age 24, a dancer with few acting credits and scant evidence of a gift for being funny.

"She was a very quick study," Reiner sums up admiringly. "It didn't take her very long."